"Being fathers means introducing the child to the experience of life, to reality. Not holding him back, not imprisoning him, but making him capable of choices, and giving him the freedom to leave." (Francis in Patris corde).
by  P. Lorenzo Prezzi scj
Settimananews

In the year dedicated to St. Joseph (December 8, 2020 – December 8, 2021), attention to the foster father of Jesus is reinforced in a cultural context in which the question of fatherhood is significantly renewed.

The Pope writes in his apostolic letter Patris corde: “Fathers are not born, they become fathers. And one does not become one simply because one gives birth to a child, but because one takes responsible care of him or her. Every time someone takes responsibility for the life of another, in a certain sense he exercises paternity towards him. In the society of our time, children often seem to be fatherless.”

Devotion to St. Joseph is rather late both in the East and in the West, and the Church, which has “relocated” the figure of Mary in a dogmatic and biblical sense, is aware of what K. Barth wrote in Esquisse d’une dogmatique (1947): “The man Jesus has no father.  His conception does not follow the common law. His existence begins with a free decision of God. It proceeds from the freedom that characterizes the unity between Father and Sons with the bond of Love, that is, with the Holy Spirit. It is the place of God’s freedom, and it is from this freedom of God that the existence of the man Jesus Christ proceeds.”

But the centrality of God and Jesus does not rule out human mediation or the spiritual intelligence connected with devotions.

Father, what do you mean?

On the 150th anniversary of Pius IX’s proclamation of St. Joseph as the patron saint of the Catholic Church (Dec. 8, 1870), Pope Francis’ decision to celebrate the Year of St. Joseph is expressed in his apostolic letter, but also in other decisions regarding indulgences and the introduction in all Eucharistic canons of the mention of the saint alongside the Virgin.

New invocations have been introduced into the litany of St. Joseph: guardian of the Redeemer, servant of Christ, minister of salvation, support in difficulties, patron of the exiled, the afflicted and the poor. Not numerous, but not unknown either, are the common initiatives of 16 religious families inspired by St. Joseph with regard to the celebration of the year and the pastoral activities of the Italian, French and Polish bishops.

In the Directory on Popular Piety and the Liturgy (2002) it is written: “Throughout the centuries, especially in recent times, ecclesial reflection has highlighted the virtues of Saint Joseph, among which the following shine out: faith, which in him was translated into full and courageous adherence to God’s saving plan; diligent and silent obedience to the manifestations of his will; love and faithful observance of the law, sincere piety, fortitude in trials; virginal love for Mary, the dutiful exercise of fatherhood, a quiet life of labor” (no. 219).

In this context, one can point to a book published as a quaarterly edition of the Nouvelle revue théologique that collects five essays that appeared in the journal from 1953 to 2013, under the title Saint Joseph. Théologie de la paternité (Paris, 2021). The authors are: H. Rondet, X. Léon-Dufour, A. de Lamarzelle, P. Grelot, P. Piret. I will take up  again some of their remarks on the history of the devotion and its biblical references.

Scripture and the Apocrypha

Scripture traces the figure of Joseph in a very straight forward manner, but his personality is absolutely real, not at all invented or imaginary. He is a well-known craftsman, pointed out by all as the father of Jesus. The apocryphal gospels have made the effort to enrich the scanty notes of Scripture.

In particular, the Protovangel of James speaks extensively of his marriage to Mary and passes on to the following centuries the image of Joseph as an old man, a widower with other children. In the patristic tradition, his is a secondary role, but his virginity is affirmed and, because of his function as nurturer and educator, he is named as protector of the entire Church. New apocrypha appear (Gospel of Infancy, Story of Joseph the Carpenter, Gospel of the Nativity) that enrich the legends such as the marriage which took place when Joseph was 89 years old (he later died at the age of 110-), the presence of children from the first marriage, the accompaniment of angels for Joseph’s soul to heaven.

Popular devotion began to develop in the East no earlier than the ninth century and in the West after the tenth. Although hinted at by Hilary of Poitier, Ambrose, Chrysostom, and Augustine (from 300 to 500 AD) specific attention is noted only from St. Bernard and pseudo-Bonaventure. For St. Thomas the sanctity of Joseph is linked to his role in God’s plan and in the economy of salvation. More effective in terms of spreading devotion was art, which, beginning in the 15th century, translated spiritual authors such as Ludolfo (the Carthusian) into images.

Popular piety gains strength from the fifteenth century. Its promoters were Bernardine of Siena, Vincent Ferrier, Pierre d’Ailly, and Gerson (Chancellor). The latter delivered a famous sermon at the Council of Constance (1412).

But it is the anti-Reformation controversy that develops the first treatises, including Isidore Isolani (Summa dei doni di san Giuseppe). Among the Jesuits we can remember the Fathers Coton, Binet, Barry and, above all, Moralés who discusses the theological opinions on the various topics related to Joseph. From St. Teresa to Peter of Alcantara, from Francis de Sales to Olier, to Vincent de Paul, the cult to St. Joseph enters more empnatically into spiritual books. Mention should also be made of Bossuet’s famous panegyrics.

No less a change was introduced by the Renaissance, which, with its critical spirit, took up the question of Joseph’s age at the time of his marriage and the established representations, such as the donkey accompanying the flight into Egypt. The most effective artistic success of the renewal can be seen in the paintings of La Tour.

Gerson had asked for the establishment of a liturgical feast for St. Joseph, and this happens with Sixtus IV in 1481, setting it at 19 March. Innocent VIII elevated its role and with Gregory XV it became a feast of obligation. In 1714 Clement XI composed a new office.   Sincre time immemorial St. Joseph has been celebrated in the universal Church.  But the late introduction into the liturgy raised many questions about his presence in the Eucharistic canon, in the litanies and where to place him (before or after the martyrs, before or after the Baptist).

It is Prospero Lambertini (Benedict XIV) who deals with Joseph theologically. He exclude his being sanctified in utero matris, but recognizes his role in God’s plan and shows his dignity that places him before confessors, martyrs and apostles. On December 8, 1870, the Sacred Congregation of Rites solemnly proclaimed St. Joseph the patron saint of the universal Church.

Commenting on Mt 1:18-25 (Joseph assumes the legal paternity of Jesus) Xavier Leon-Dufour writes: “Joseph shows himself to be just, not because he observes the law that authorizes divorce in the case of adultery, nor because he shows himself to be benevolent, nor because of the justice due to an innocent woman, but (his resistance) is motivated by not wanting to pass himself off as the father of the divine infant.

If he is afraid to take Mary his bride with him, it is not for a profane reason; it is because he, as Eusebius expressly says, recognizes a higher economy than the marriage he was pursuing. The Lord has altered his design about him: he makes him worthy to secure the future of his chosen one. Joseph withdrew, taking care, in the delicacy of his justice to God, not to “divulge” the divine mystery of Mary. It is useless to seek out how to accomplish his purpose; these are superfluous details for the evangelist.

This righteous man is placed by events above the legal plane… (the text) shows that Joseph is not only a model of virtue, but is the man who plays an indispensable role in the economy of salvation.”

Pierre Grelot, commenting on John 6, 42-43 (“Is this not Jesus, the son of Joseph? Do we not know his father and mother? How then can he say ‘I have come down from heaven’?”) writes: “For Jesus, the relationship with Joseph and Mary was essential for him to become a grown man. When we reflect theologically on the incarnation of the son of God, we frequently forget that he was not, humanly speaking, an adult right from the start: he grew in wisdom, size and grace before God and before men.

Moral growth, physical growth, spiritual growth: the three together, Luke notes. It is not necessary to recognize a contrary argument in the communication of the divine perfections to Jesus – in theological language it is called “communication of idioms” – in order to imagine Jesus as an already made adult who, from birth would have enjoyed universal perfection in all areas of psychological life. He would not have been a man in appearance, as the docetists already claimed”.

Agnés de Lamarzelle reads Genesis 1 and 2 in parallel with Matthew 1:18-25. Just as the history of creation is interrupted at the moment of the appearance of man, so the genealogy of Jesus faces a gap at the moment when it assures the Davidic descent of the Christ, passing from the genre of genealogy to that of proclamation.

How can Jesus’ Davidic lineage be assured, since the conception involves only Mary? How to reconcile the lack of male intervention with the legal belonging to the Davidic lineage? Joseph knows that he is not the biological father. His righteousness consists in staying in his own place.

“Totally oriented toward the fulfillment of God’s will he accepts that he does not understand the mystery that touches him closely. He acts according to what he knows, deciding to disavow her (Mary) in secret. He is not the father and cannot fulfill this role for the child. He separates himself from the promise, without drawing opprobrium on Mary,  who he knows would never displease God.”

His being righteous threatens to impede God’s plan. Faced with a humanly insoluble situation, the Angel intervenes to call Joseph to a double role: to take Mary into his home and to give his name to the child, rooting Jesus in the Davidic linege. He renounces physical paternity to participate in the mystery of the redemptive incarnation, leaving all that place for God.  Only Mary will be the mother according to the flesh, but it is up to Joseph to build a bridge between the two testaments, anchoring the Savior in the Davidic lineage.

The mystical sleep from which Joseph awakens recalls Adam’s sleeping at the moment of Eve’s birth. Joseph “called to the extraordinary mission of being the father of the Son of the Father, allows Emmanuel (to be grafted into the line of David and) to be with us: with his bride, with the people who awaited him, with all those who agree to be with him, beginning with the reader who enters into this ‘we’ that calls him to live the covenant.” 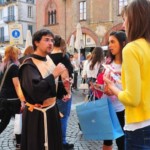 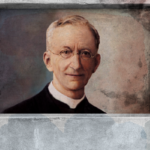