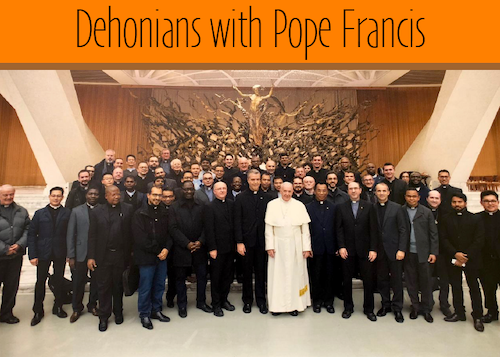 The new general administration, together with the community of the general house in Rome, and other Dehonians who were present, met the Holy Father, Pope Francis, during the general audience on Wednesday, November 28, 2018, at the Paul VI Audience Hall.

There was a desire to have an audience with the pope during the General Chapter, which was in July. However, Pope Francis was not available. It was hoped that a meeting could take place at a later date.

On Wednesday, the pope concluded with a reflection on the commandments: “In the contemplation of life described in the commandments, that is a grateful, free, authentic, blessed, mature, guardian and lover of life, faithful, generous and sincere, we, often without realizing it, find ourselves before Christ. The Decalogue is his ‘x-ray’, which he described as a photographic negative that lets his face appear –– as in the Holy Shroud.

We were also involved by that silent child who took the liberty of going to the pope and then to the Swiss Guard: “This child cannot speak, he is silent, but knows how to communicate,” said the pope. “He is free, unruly free, but free! Am I so free before Jesus?”

At the end of the catechesis, after greeting the sick and the newlyweds, the Pope came to meet us, arranged on the steps, to take a group photo with him.

Looking at Fr. General, the pope greeted us with a joke: “Is this the new superior general or the next bishop?!” recalling what happened in April.

We smiled because we knew what he meant!

Immediately Pope Francis added in Italian, and then repeated in Spanish: “Pray for me!”

We left him to continue his greeting of the pilgrims, bringing with us the invitation, repeated, to pray for him. This is what we do and will continue to do!

The community of the General House is pleased and grateful to have had a meeting with the successor of Peter, as he loved Fr. Dehon.

This was really a “walking together” after the initiatives for the “Dehonian Memorial Day”, as we continue to prepare for the celebration of the 150th anniversary of the priestly ordination of Fr. Dehon, already which had been noted during the chapter with a festive concelebration in the Basilica of Saint John Lateran. As a community, we will be together at the pontifical French seminary of St. Clare on the afternoon of Wednesday, December 19, 2018.