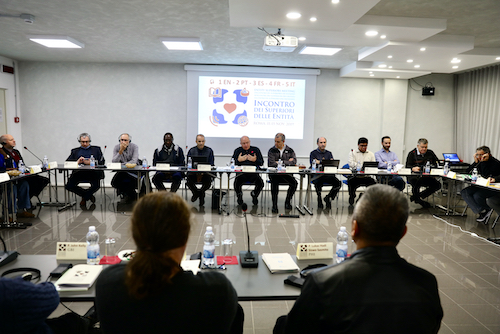 We have had the first day of the Meeting of Major Superiors promoted by the General Government. It is taking place in Rome, at the Generalate from 11 to 15 November. There are 37 confreres from all of the provinces, regions and districts of the Congregation, along with members of the General Government and the main services of the Curia. Actually, the meeting started yesterday after dinner. While eating chestnuts, all superiors were presented with an ice-breaker organized by the International College.

This morning, Fr. Stephen, vicar general, presided over the Eucharist and, in the classroom, presented and guided the work of the day, reflecting on the ability to be patient and to know how to face unexpected events with faith. A characteristic that marked the life of Saint Martin – whose memory we celebrate today – and that of Father Dehon. These same attitudes must also be present in our apostolate, which favors the poor and the those on the perifery. This is our “leaving the sacristies,” as Father Dehon told us. Father Steve stressed that we never surprise God, because He knows everything about each of us, but it is God who always surprises us. To accept these surprises is to make our way our own.

The Superior General, Fr. Carlos Luis Suarez, after greeting all those present, stressed that many people helped Jesus to broaden the horizons of his mission. Many times he has had to face unexpected situations. Father Dehon also learned to read the concrete expression of God’s will in unforeseen circumstances and difficulties.

Even in the life of the entities there are so many unforeseen events, so many difficulties and problems that the Major Superior must try to solve. God is in action and even today the Congregation surprises.

The Superior General then took the episode of the Disciples of Emmaus as the paradigm of our life. We are often like them, returning to Emmaus: discouraged, hopeless, full of criticism and negative comments about life. But it is important to be accompanied by Jesus, because only He can open our eyes, broaden our horizons. It is on their return to Jerusalem that the two from Emmaus find joy in the community gathered in the name of the Risen Christ.

The General Government, rereading all the documentation of the last General Chapter, came to the conclusion that the sentence that best summarizes the work done is this: its way is our way (Cst 12). It has become the title of the six-year Programmatic Letter and will serve as a basis for this week’s reflection. A reflection that, the Superior General emphasized, aims to be a synodal way of listening to and understanding the expectations of Major Superiors, so that the mission of the General Government can reach the goal of promoting Sint Unum in the Congregation.

In the resumption of the afternoon’s work, Father Levi, General Councilor, presented the outline of the document “Starting afresh from Christ”. The Major Superiors deepened their reflection and sharing on some important issues of the document.

Towards the end of the day, Father Juan José Arnaiz presented the reality of the Dehonian Study Center, which is dealing with a lack of personnel to carry out this service to the Congregation. He appealed to the Major Superiors to make people available for this mission and presented the scholarship as a concrete way to attract people to work in the Study Center.

Finally, Fr. Levi, responsible for the accompaniment of the communication sector, together with Fr. Pedro, presented the policy of the General Government for this sector, which has as its main objective to keep alive the flame of the Dehonian being.