Migrants and refugees: a never-ending appeal 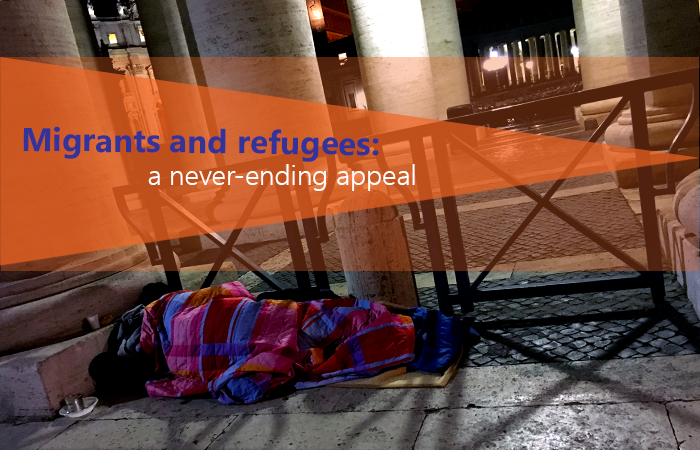 We began Lent, and the Word of God does not stop reminding us that charity is at the center of God’s revelation. That the needy hunger and thirst for charity and solidarity.

Is not this the fast that I choose… Is it not to share your bread with the hungry, and bring the homeless poor into your house; when you see the naked, to cover them, and not to hide yourself from your own kin? Is 58,6-7

Pope Francis told us in his message for the World Day of Migrants and Refugees in 2015: “A Church without borders, Mother of All”, who, confronted with the globalization of the phenomenon of migration, knows how to counter with a globalization of charity and cooperation and so humanize the conditions of migrants.

This appeal is not the first one of the Pope, his is the voice of one who in the light of the Spirit has taken on one of the greatest problems facing humanity today.

Lent in the year of Mercy

In this year of mercy, to hear the Word of God clearly say: “bring the homeless poor into your house,” is a reminder of Sunday, September 6, 2015, when at the Angelus prayer, the Pope, seeing the nearness of the Jubilee Year of Mercy, called upon all religious communities to welcome a family of refugees, as a concrete response to this human tragedy that has affected thousands of people fleeing from death caused by war and hunger.

Mercy. On the evidence of God

The General Government, wanting to be faithful to the Gospel, has chosen to focus on the poor generated by the process of migration and contemporary globalization:

“As children of Father Dehon we want to give real answers and real help to the needs and necessities that are the result of the current phenomenon of migration and globalization”.

This statement must lead to a concrete commitment of mercy:

“Make sure that every entity responds concretely to the challenges of migration”.

Committee of migrants and refugees in our house in Rome

At the beginning of the academic year 2015 – 2016, our Generalate (Rome I) and the International College (Rome II) began a process of reflection and research to realize this difficult challenge. We know that hope always carries with it an element of struggle.

As a first step, we created a committee with members representing the total make-up of the community of Rome (General Curia, staff, students). In this committee there are representatives of all the continents where we are present today.

What are we doing?

We started with a search for information with a number of organizations and communities who are already engaged in this field (the Community of Sant’Egidio with its movement: People of Peace and Humanitarian Corridor; Caritas of the diocese of Rome, and a number of religious congregations such as the Scalabrini) . We would like to know what others are doing for refugees and immigrants so that we may learn what could help us in our reflection and in the discernment toward a decision on what we can do.

We would also like to remind the whole congregation the appeal of the program of the general administration which includes an invitation to all the entities to do something, “making sure that every entity makes a concrete response to the challenges of migration.”

Why do the walls go up?

Why do the walls go up?