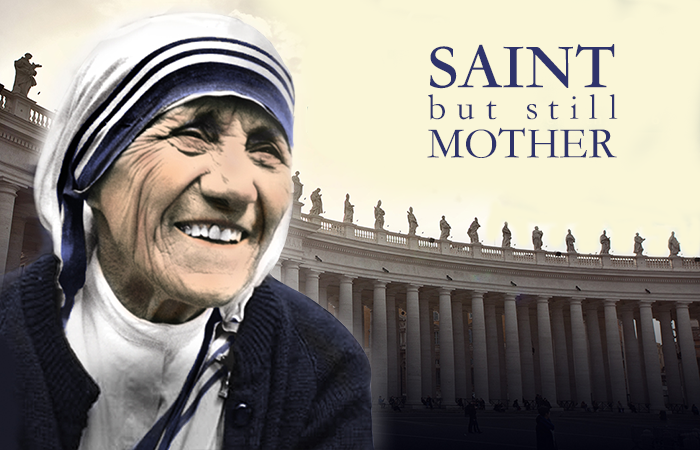 Attending the Canonization of Mother Teresa of Kolkata brought back memories of how I first became acquainted with her Congregation. During novitiate a large group (perhaps 15 or so) Missionaries of Charity Brother novices participated in our weekly inter-community novitiate classes. Our SCJ house was located in a quiet retreat center in the high desert of California. The MC Brothers’ formation house was in a former warehouse in the heart of Los Angeles’ busy Skid Row.

After our morning class we spent the afternoon accompanying the Brothers as they made their rounds to serve people in the neighborhood. At first, the people we encountered, especially those wasted on cheap booze or high on drugs, scared me. They showed how to approach the people I wanted to walk away from, and to build trust and relationship. They had no money to give, only their time and attention.

When we stayed overnight, we rolled out thin bamboo mats in one large common room and slept side by side. For a 22 year old, getting up in the morning was a chore, but rising at 5 am as they did seemed insane to me. They spent a full hour in silent prayer and meditative reading in the chapel before community prayer and mass. I slowly began to go beyond the internal clutter and discover how that type of prayer is so necessary to find the space for a busy apostolic life. 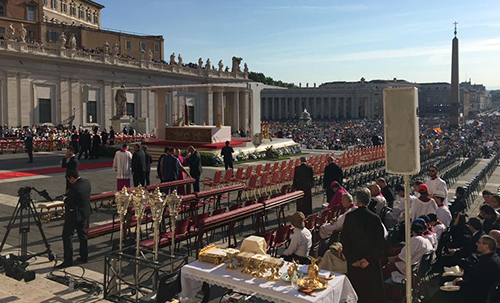 The Brothers only had two sets of clothes, one to wear and one to wash and let dry. When I felt some guilt about what I had in my closet, Brother Guy said to me, “While it’s true I have fewer clothes, I still might be more materialistic than you. If anyone touches one of those shirts I want to break their arm!” Being able to laugh at our foibles is a good start to spiritual growth. My time with them taught me a lot about prayer, service, simplicity, the common life, and seeing Christ in the face of the poor.

To learn more about Mother Teresa, I read several books about her, and was especially moved by Malcolm Muggeridge’s documentary movie “Something Beautiful for God”. I also read “Come Be My Light,” which was controversial for some because she shared her struggle with darkness in prayer. While for years she did not experience a lot of personal consolation, her gaze and smile and life of charity brought others a joy that was infectious. 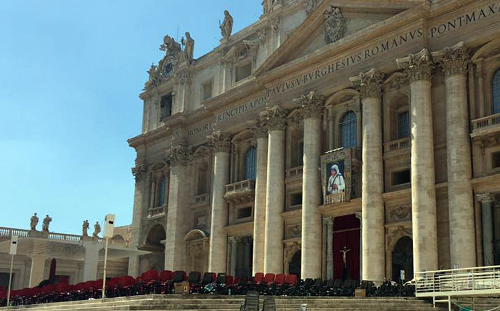 Fr. Michael van der Peet (now deceased), an SCJ priest in the US Province, met Mother Theresa while he was in Rome. After she invited him to give her community a retreat, he struck up a friendship with her and treasured the handwritten letters he received from her where she shared a lot about her faith experience. During the process of investigating her cause for sainthood, Fr. Michael was invited to return to Rome to give testimony about her spiritual life. He had no doubts about her holiness.

At her canonization on September 4th we SCJs were part of a vast crowd (100,000+), but Mother Teresa saw vast crowds of poor on the street every day. She began by reaching out to individuals and inspired others to join her so her outreach multiplied like the loaves and fishes. 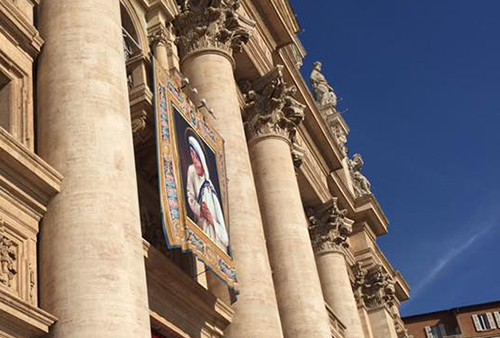 She challenged power by her words and example to attend to the needs of the poor. She passionately defended human life, from the beggar dying in the street, to the unwanted child in the womb.

During the liturgy Pope Francis told us that while she is now “Saint” Teresa, we can still call her “Mother.” Mother is such a good word to refer to those who are filled with compassion and gratuitous love. The heart and arms of this tiny woman were big enough to embrace the whole world. Her example calls me to deeper growth in faith and mercy.

Through her care for the poorest of the poor, Mother Teresa embodies the spirit of this extraordinary Jubilee Year of Mercy. As the face of mercy, she is a shining example of what I hope Church can be for our needy world.

Meditating with the Lord

Walls in the Year of Mercy

Walls in the Year of Mercy

Meditating with the Lord