Interview with Daniele Bombardi, contact person for Caritas Italiana projects in the Balkans. He lives in Sarajevo.

Daniele, what is the ‘latest’ from the Balkan route?

From Bosnia and Herzegovina, especially from the extreme edge facing Europe, we have observed, for some years now – at least since 2018 – the pattern of movements, according to the seasons:

The situation in the countries of origin and transit, along the entire Balkan route, has not improved at all. On the contrary, the Syrian crisis, the Afghan crisis, together with all the others on this route, are all very active. So we anticipate overall refugee flows comparable to – if not greater than – the years just past. Emergencies are around the corner again.

Do you notice any consequences of the crisis between Belarus and Poland?

I cannot say that I have registered any consequences – at least immediate ones – to the migrants crisis due to the problems between Belarus and Poland, with reference to Bosnia Herzegovina. Maybe the migrants are trying to open a new route from there. But, as we know, everything is done to prevent, even with military controls, barriers and real walls of steel and concrete.

Walls are multiplying outside and inside Europe, a part of humanity is entrenching itself inside its own fortresses to prevent in every way the passage and the entrance of another part of humanity coming from the worst living conditions.

It is no coincidence that a letter from 12 European countries has recently surfaced asking the Union to finance the construction of massive physical impediment. The problem is certainly complex. It should be addressed by politics in a very different and articulated way. While the policy of force prevails, and therefore of “walls”, which is obviously the worst response that can be made.

Is the Afghan affair of the summer already having an effect on the Balkan route as well?

Here I want to say clearly that the Afghan population is – for years – the most present on the Balkan route! The reason is – to us observers – well known: Afghanistan has never been a safe country, even if in Europe, until now, for political convenience, people have continued to say that it was.

In the summer, with the entry of the Taliban into Kabul, we had confirmation of how unsafe the condition of the population was – especially outside the major cities – and how intense, therefore, the push to leave Afghanistan was and is.

At present we do not observe an increase in the number of Afghan refugees along the Balkan route, at least more than the already significant flow. It may be that this will happen in the near future: we know that it takes several months after departure from the country before we see people here, in the Balkans.

The haste to build more walls could, at least in part, be explained in this way: the European countries that have shown so much solidarity in recent months for women and the Afghan people, have, in fact, no desire to accept and recognize the status of refugees to significant numbers of men, with entire families, of Afghan nationality.

Are the refugee camps in Bosnia and Herzegovina at least better equipped to deal with winter?

Overall, the number of places in the camps has decreased. And in this situation we are preparing to face the winter. Two refugee camps in the border town of Bihac have been closed because the facilities where the migrants were placed are privately owned, with all the costs that came with it.

Therefore, in and around Bihac today we are talking about two camps: the first one existing since 2018, in a then dilapidated building owned by the state, then re-fitted for this purpose, the second the one in Lipa 20 kilometers from the city, the one that made headlines last winter for the conditions of degradation – without water and electricity – and also for the outbreak of the fire of the tents under Christmas.

The “new” Lipa field was to be opened now, in early September. Work is progressing slowly. But even when they are completed, the camp will not be able to compensate for the loss of places in the already closed camps. Then there is the truly unfortunate location of Lipa, on the first mountain spurs, in an remote area, isolated from the world.

How will Caritas’ efforts develop?

Our commitment is expected to develop along four lines. The first commitment will be to try not to abandon anyone in extreme conditions: I am referring to those immediate needs of humanity, without warmth, without anything, to which I have mentioned.

We have also been working for some time, in agreement with the authorities and other bodies, to organize a presence of structured services within the “new” camp of Lipa: it is necessary to guarantee a continuous distribution of goods, of which there is always a shortage, as well as offering a minimum of counseling and psychological assistance to people.

We are also evaluating how to intervene in favor of the poverty of the local community. It is undoubtedly true that many of the unfortunate feelings towards migrants stem from the difficulties of a population that is already suffering from a recent history of war, from which it has clearly not yet emerged. Therefore, for example, all our purchases for migrants are made locally, at small cooperatives that employ people in serious social difficulties.

As I said, we are again preparing for the worst. May the Lord-with the generosity and charity of many Christian communities and many people-that this is not the case. 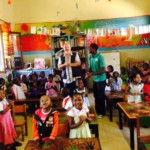 “Beyond statistics, migrants and refugees have faces”