Visit to the Franco-European Province 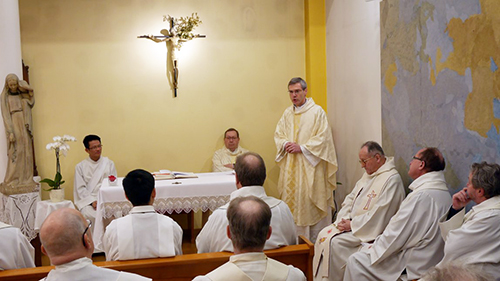 The superior general, Fr. Heiner Wilmer, and his councilor, Fr. Artur Sanecki, concluded an intense week in the EUF province – from February 5-10 – on a canonical visitation. The visit was organized in the three main communities of the Province: Clairefontaine, La Cappelle, and Paris.

In each of the three communities, the superior general and Fr. Artur had the opportunity to meet not only the confreres of the host communities, but also those of neighboring Dehonian communities.

The opportunity to hear from each of the confreres of their vision of the projects of the province and their insertion in these projects, was much appreciated by the superior general, who, thanks to these talks, will be able to give an account of the visit, which will be sent to the Province. 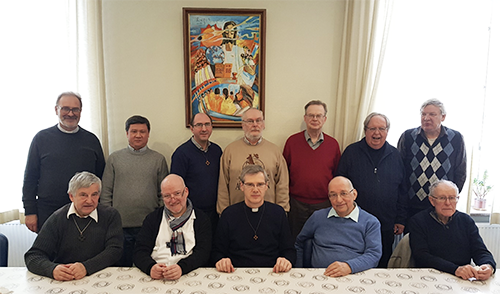 The confreres spoke of their work, their hopes for the future and the challenges they encounter in their ministries, which include parish ministry, the ministry at the University of Louvain, pastoral ministry and spiritual animation in some of the most popular areas of the city, and the ministry of accompanying sick people. This is in addition to their commitment to the world of work and young people in formation, the social problems that arise from the problems of the marginalized, refugees, and the homeless. These are problems that present important challenges that must be grasped and tackled. All the confreres of EUF participate in the activities of the various apostolates, regardless of their age. They include former missionaries of Africa who still want and are able to give their contribution.

In the meetings with the members of La Capelle, to which were added those of Saint Quentin and Brussels, the importance that the province gives to these places, which are three historical places of the Congregation, has emerged: La Cappelle is the hometown of Fr. Dehon, Saint Quentin saw the birth of the Congregation of Dehonians, and Brussels, as well as being the city where Fr. Dehon lived for many years, was also where he died. This is what makes them a destination for travels and pilgrimages for all those who wish to retrace the steps of Fr. Dehon and of the Congregation. Visitors are welcomed with joy and a spirit of fraternity by the confreres who work and live here.

During the evening Eucharist on Thursday, in the community of Paris, presided over by the superior general, the confreres were able to participate in the conferral by Fr. Heiner of the ministries of acolyte and lector to Vincent Nguyen. 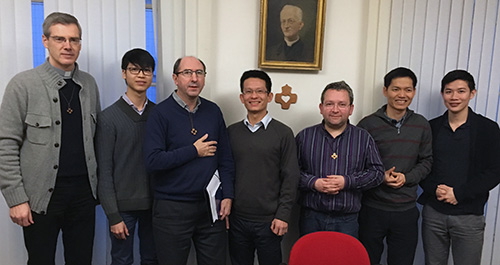 The provincial superior expressed his gratitude for the time dedicated by the superior general to the meeting with the confreres. This was time that was above all a signal of encouragement from the superior general, in the continuation of the work and the commitment to carry forward the future projects of the Dehonian presence in Francophone Europe.