Visitation of the Canadian region

Though small in numbers, the Canadian Region is big of heart as they strive to serve their neighbors, and promote God’s Reign.

Two years after the Superior General’s planned Visitation of the Canadian region was canceled due to the Covid pandemic, Canada’s borders finally opened up to travelers in August and I was able to spend a week checking in with our Canadian SCJ confreres in early September. Canada is one of the most multi-cultural countries in the world, and our members are reflective of that reality. The group of 24 is spread over three different local communities, and come from 7 different countries of origin. The region has set one of its priorities as working to build stronger ties among the members and promote healthy intercultural community living.

The local community in Montreal Quebec is French speaking and is comprised of native French Canadians as well as Dehonians from Cameroon and Congo. Fr. Gustave Lulendo N’dotony, the Regional Superior, has his office there and along with the secretariate for benefactors and the missions. Several of the priests work together for the pastoral care of several nearby parishes. The community also houses elderly religious whose health necessitates retirement from full time ministry. During the pandemic many parishes were completely closed, and later masses and gatherings were limited to only 10 to 25 people. Slowly the parishes are beginning to come back to life. Visitation is a scenic church on the banks of the Prairies River and has been in high demand for the many weddings that had to be postponed due to Covid restrictions. Our priests have been busy there every weekend since larger gatherings have been allowed.

The Region’s former minor Séminaire du Sacré-Cœur, is now a well respected co-ed high school serving the small towns near Pointe-au-Chêne. While Dehonians no longer teach at the school, the Region has worked to keep the Dehonian spirit alive and strong through mission awareness efforts with the students, staff and board of directors.

Ottawa long served as a center for Dehonian professors who taught in area Universities, especially at St. Paul University. Most have retired yet keep active with a variety of pastoral ministry. On Sundays the community chapel opens its doors to the neighborhood, and a lively group of worshippers have established many ties of prayer, faith and support. Like many others, contact was very limited for a time, and people kept in touch via live streaming. Fr. Paul Tennyson serves a large clientele as chaplain of the Perley Veteran’s Health Center, a place heavily affected by the Covid pandemic from the very outset of Canada’s outbreak. Since Ottawa has several fine universities nearby, the community has regularly hosted foreign SCJs who have come for studies. Fr. Paulin Makala from Congo just finished his studies in Conflict Resolution, and Fr. Guy Betrand from Cameroon has just begun a degree in biblical theology. Fr. Greg Murray just began serving two parishes just across the Ottawa River in the nearby Gatineau diocese.

Toronto has one local community but two houses in different parts of the city. St. Thomas More is an active, multi-cultural parish, with parishioners immigrating from over 30 different countries of origin. The 3 SCJs who serve there are from Indonesia, Brazil and India. Holy Rosary was the church of entry for many Portuguese, with liturgy still offered in that language. In the High Park community house Dehonians reach out to migrants and help with pastoral work, including a city wide ministry to the Indonesian community. Despite the distance and diversity of ministry, the community make a great effort for everyone to be invested in each other’s ministry, even if only in small ways. They emphasize the need for all their ministry to be identified as a communal Dehonian commitment.

Though small in numbers, the Canadian Region is big of heart as they strive to serve their neighbors, and promote God’s Reign. 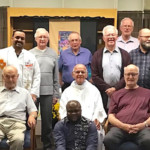 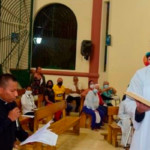 Giving oneself to the Lord

Giving oneself to the Lord