Wars in Africa: The Case of NOSO in Cameroon and the Dehonian presence

Since September 2016 there has been a civil war in the English-speaking regions of the Cameroon known as NOSO (North West and South West) that has already claimed several thousand lives. The Priests of the Sacred Heart have three communities in this crisis zone.

“The continent of war.” This is one of the clichés used in other countries to define Africa. Does such a cliché correspond to its reality? Not necessarily, but the fact is that the African continent is home to too many armed conflicts, compared to current global trends. In its 2020 report, for example, SIPRI (Stockholm International Peace Research Institute) noted that in 2019 active armed conflicts took place in 32 states, of which more than 15 were in Africa.[1] Two months earlier, the chairman of the African Union Commission had recognized before the heads of state gathered in Addis Ababa that Africa is “a continent struggling with phenomena such as terrorism, inter-community conflicts, pre- and post-electoral crises and inter-state disputes?”[2] If Africa in general is slow to integrate and to impose itself in the court of industrialized countries, this is due among other things to the many wars that are spread on the continent and which are an undeniable brake in development. One of the examples that has caught our attention in recent years is Cameroon, known until now as a country of peace.

The Anglophone crisis in Cameroon

The government, through the forces of law and order, responded to these demands in the form of a protest march in the city of Bamenda with a violent response: tear gas and water spraying on the demonstrators, whipping of some demonstrators with batons, multiple arrests, shots fired, etc. Baffled by these scenes worthy of an action film, it was the turn of the students of Buea, the capital of the Southwest, to continue their protests. The response of the police and defense forces, dispatched to the area, left all observers stunned. The students were chased to their various homes, kicked and beaten with clubs, and rolled in the mud like pigs. In short, there was an attack on the dignity of a group of people who were peacefully demanding change in their favor. The more repressive the government became, the more the English-speaking population revolted, developing an armed group called the “Amba boys”. This form of conflict resolution by the state, based on intimidation and repression, has led to a shift from peaceful demands in the NOSO to a fratricidal war between the separatist forces (Amba boys) that have emerged from these demands and the Cameroonian army. The latter are calling for the secession of the country to allow them to form an independent state, already christened “Ambazonia”, uniting the English-speaking areas of Cameroon. All the efforts of the government, although selfish and always late, for a way out of the crisis have been in vain so far. Radicality has won the separatists’ camp: separation.

Caught up in an unwanted war between the Cameroonian army on the one hand and the separatist forces on the other, the population of these English-speaking regions is lost and disoriented: blood flows daily, houses are burned, … as Father Michael Fuh scj, parish priest of Ndu, one of whose posts, Ngarbuh, [4]is the subject of one of the biggest scandals of this crisis, explains. This situation forces the innocent population to flee. The statistics are alarming: more than 4,000 civilians killed, more than 700,000 internally displaced and 63,800 refugees in neighboring Nigeria. [5]

The Priests of the Sacred Heart, also called Dehonians, have three communities in this crisis zone. A formation house in Bamenda and a parish in Balikumbat, both in the Archdiocese of Bamenda, and another parish in Ndu, in the Diocese of Kumbo. Faithful to the charism of their founder, Father Leo John Dehon, the Dehonians working there are very active in the accompaniment of the faithful, in the education of children through the parish schools and in the formation of young Dehonians through the formation house in Bamenda. From this active presence for several years, an admirable closeness with the local population has been born. This is why, even if pastoral activities have taken a hit since the beginning of the English-speaking crisis, the link with these innocent but suffering populations has not suffered any injury; on the contrary, they have found in the Dehonian presence a source of comfort and hope, as the Dehonian Fathers working there constantly remind us. Their various parishes have even become places of refuge for these disoriented populations, from whom the war has taken everything, leaving them without a roof over their heads, without food, and sometimes without family. In their parish of Ndu, for example, the Priests of the Sacred Heart have had to welcome villagers to the parish rectory on several occasions, housing and feeding them for some time. In addition, they have been able to find host families for some of the young people of their parishes in the French-speaking areas of the country. This is the case of young Amandine from Balikumbat, who had to abandon her studies because of the war. With no prospects for the future in the area, she is, thanks to the fathers, well settled in a charitable host family in the French-speaking area, where she is following a training program that should enable her to earn a decent living. In their mission as pastors to this downtrodden population, the Dehonians give themselves body and soul, so that the reign of God may come, a reign of peace, in the souls of these terrorized populations, and in the heart of this society at war. May their work, along with the efforts of all other peacemakers, bear fruits of peace that will spread throughout Africa!

[3] As a legacy of colonization, two regions (North-West, South-West) out of ten in Cameroon, or 20% of the population, are English-speaking, the remaining 80% speaking French.

[4] Ngarbuh is a small village located in the Ntonga Manton department. 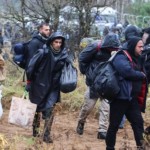