Dehonians in Italy have opened a fraternity near Bologna which intends to be a coexistence of various vocations. It is not defined by a work, but by a way of life. And yet we are characterized by our commitment to social work, especially in prison ministry, a concrete way of living the charism of reparation.

What is now called “Fraternity Tuscolano 99” is a coexistence of different vocations that began to take shape ten years ago around a welcoming project.

The idea is a friendly and hospitable fellowship and, whenever possible, a faith experience.

Welcoming is the key-word of this project: a home where guests feel at home.

An inspiration was over this idea: the main and permanent host could be God. This thought imposed itself on us, so we had to talk and pray to discern it. We wanted to create an environment such that God would not have to mask his face with us.

Fr. Enzo Franchini has accompanied, with his extraordinary spiritual insights, the Fraternity’s journey from the very beginning. We shared his conviction that this Church must begin a new history. We feel the vocation to be a spark of new non-hierarchical and very amalgamated Church of people who are also diverse in spiritual orientation, vision of faith and experience of God.

We strengthened the conviction that we were forming a group in the sign of Providence.

As time passed, the need to arrive at a coexistence that we began to call Fraternity became urgent.

The search for a home has been long, punctuated by disappointments and new opportunities. Situations which involved Curia, parishes, Dehonian administration and missionaries. We are convinced that Providence has accompanied us step by step, because where a prospect in which we had invested closed – traumatically – a better one opened up.

Looking back, it was all work of Providence because the Fraternity had time to better build its identity, firming its decision not to pose as a founding work.

We then “landed” at the farm complex made available by Saints Savino and Silvestro Parish in Corticella (Bologna), which, with ever unique generosity, gave us the property and paid almost the entire reconstruction costs. We named it Casa Don Giuseppe Nozzi, in memory of one of Corticella’s parish priests, remembered with affection and gratitude by the parish community for his welcoming simplicity and for being a “great man of charity.”

Communal prayer is especially dear to us. We make a daily appointment for adoration and the liturgy of the hours.

Currently, we celebrate the weekday Eucharist at the nearby House of Charity, together with the guests (disabled people), Carmelite sisters and volunteers.

A Fraternity, not a religious community

We do not consider ourselves pioneers. There are, and we have looked at them, other experiences of living together that resemble ours.

Our coexistence is not codified in set structures; it does not include vows or hierarchies, which are regular structures of religious communities.

Ours is a fraternity because it meets the following characteristics:

It is also important to remember that we consider ourselves to be in open and continuous evolution.

Vocation to welcome ourselves, God, and others 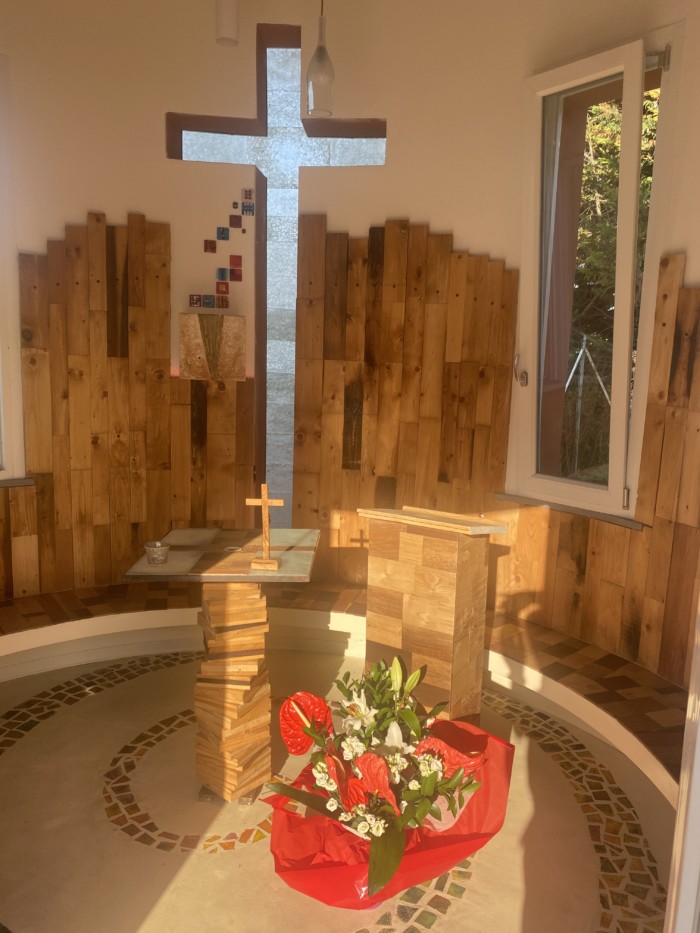 Welcoming is for us an attitude of the heart and a program of life, giving sacramental substance to personal and community life.

First of all, it is expressed toward God, to maintain a living fellowship in which he can feel good, among friends.

Secondly, it is expressed toward ourselves: knowing that we are accepted by God, we surrender ourselves to him as we are; combining our desires with his grace in mutual trust.

It is also expressed toward others, both within the fraternity and with anyone we make contact with. In the certainty that mutual acceptance generates good life and repairs the deep evil of loneliness, an evil that even God is afraid of.

We bring together different public individuals (religious, consecrated, families, social workers…) not to join forces, but precisely to share life so that each one benefits of the charisms of others as a gift. Equality comes from the conviction that each one is complete in what he gives and receives.

Vocation to be a fragment of an emerging, familiar, and free Church

The fraternity is inserted into the life of the land and the local Church. It collaborates with all existing bodies which promote formation, inclusion, and solidarity.

It participates actively in the mission of the local Church. Although we do not desire to take ownership of the parish, we cooperate in evangelization and pastoral activities.

We dream of a Church that grows new seeds freely.

We try to circulate positive energies of living faith.

We are inside the Church critically, but with all the love we feel for the Body of Jesus.

We are not founding a work

We propose a coexistence not to give birth to a work, nor a specialized pastoral service, but to live an experience of communion and fraternity that does not allow itself to be corrupted by conflicts of character which are inevitable. Because we believe that communion among us can be founded in the Mystical Body where communication goes through Jesus himself.

The home for imprisoned persons

In the Don Giuseppe Nozzi House complex, two of the five buildings are reserved for the Corticella House, which hosts an initiative for the good of detained persons.

It has been entrusted by the Archdiocese of Bologna to the management of CEIS. With the collaboration of the prison chaplain – Fr. Marcello Matté, a Dehonian – it is able to accommodate up to eight people subject to criminal execution. An autonomy project (i.e., housing and work) is built for them and with them, offered as an opportunity to become a “good citizen” in the future.

Currently, the social service system does not take charge of people with a history of incarceration, which means that these people are left to their own resources, and to find themselves in an unbearable percentage (statistically 70 percent) of repeat offenders.

Prison, as it is organized in Italy, does not help reintegration. Despite the “mythology” sustained for electoral interests, it is not true that prisons produce more security.

Although the accompaniment of these people in their last months of criminal execution actually promises a substantial lowering of “recidivism” (return to crime), social services allocate no resources to it.

At present, therefore, the management of the Casa Corticella project, as those of other shelter communities, remains totally under the responsibility of the promoters and administrators.

Therefore, an action of civil sensibilization and political solicitation are an integral part of the project which aims at “systematizing” the social service of reintegration of people who have been marked by a history of delinquency.

For us, it is a solid expression of personal and social reparation, as well as of political intelligence. Nicaragua: siege of the church

With Pope Francis we want to reaffirm that “no one is saved alone”!

The Provincial Commission for Justice and Peace and the Integrity of Creation proposes this brief reflection to the Confreres and to the entire Dehonian Family on the message of His Holiness Pope Francis for the 56th World Day of Peace, scheduled, as always, for January 1, 2023.

DEHONIANS IN SOCIAL COMMITMENTS. The impact of God’s love for our Society. IX General Conference

Social Works, Projects and Social Commitment in the German Province

Nicaragua: siege of the church