The last week of last September was a week that the MAD Region dedicated to being together in meetings, at a spiritual retreat, for the profession of vows and for the sending of members on missions, and reviewing the internal reorganization of the different communities. This year 2018, we celebrated an extraordinary chapter. As a mission we will open a new community in Antsohihy, a town in the north of Madagascar. 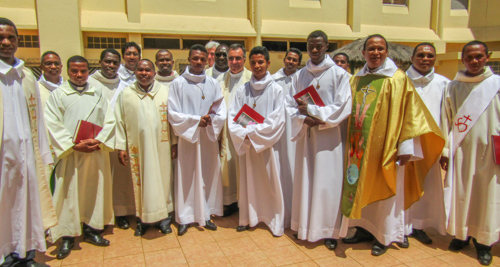 The Extraordinary Chapter took place at Maison Père Dehon Novitiate in Andranobe, from September 21-30, 2018. We began with the celebration of the feast of St. Matthew, apostle and evangelist, praising God with morning praises and Mass. The chapter was officially opened at 10.30 a.m. There were 26 capitulars and also Fr. Leopold Mfouakout, first general councilor, as a special guest.

On the first day, we reviewed our Regional Directory, highlighting above all numbers 146 and 147.

On the second day, we looked at the “Ratio Formationis Regionalis”. It is a ratio ad experimentum written in 2002 for Malagasy Dehonian religious formation. Through the work of the formation commission, based on the official documents of the Church and of the congregation, a document has been drawn up that has become the “Ratio Formationis Regionalis.” 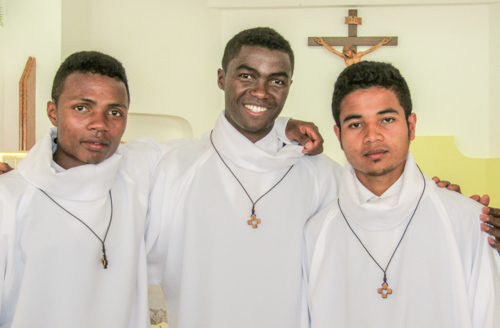 The annual spiritual exercises began after finishing the extraordinary chapter; they were lead by Fr. Leopold and lasted six days, from September 23-28, as is the tradition of the region. The testimony and sharing of the retreat director began with Chapter VI of the Gospel of John. The core of the preaching was to motivate each religious in his commitment to religious life and especially, in priestly life.

Religious profession was on September 28th. During evening prayer, 17 young men were officially welcomed: nine postulants and eight novices. Their presence is the hope for the future of our Malagasy Region.

On September 29, three confreres – Rakotoniaina Patrice Eugene, Rafanomezantsoa Bruno and Randrianasolo Clemente – professed their vows of chastity, poverty and obedience, which was followed by the renewal of the vows of all the scholastic brothers. 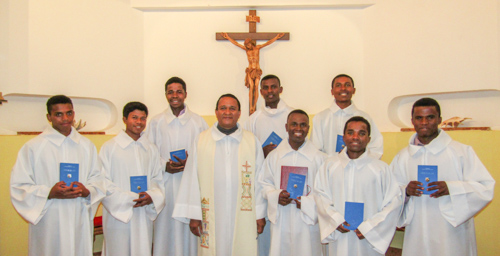 Sending on a mission – for the new mission of the region in Antsohihy, the regional council has entrusted the following confreres: Fr. Razafimahefa Yves Francis, as superior and administrator of the university; Dn. Haja Andosoa, as head of the secretariat; Br. Andrianiaina Jean Robert, who will cover the role of treasurer of the community and of the university.

This year we have four confreres who will do an internship: one at the Antsirabe Novitiate, one at the University of Antsirabe, one at the parish community of Andreba Gara, and one at the minor seminary of Our Lady of Fatima Fianarantsoa.

Trust in the Heart of Jesus

Trust in the Heart of Jesus