On the 100th anniversary of his birth, Don Poli, API-Colf's national ecclesiastical assistant, re-reads the spirituality of Fr. Erminio Crippa, scj. The commemoration took place in Rome on April 17 at the Dehonian Generalate.

“May the Sacred Heart be the stone of my rest. May the domestic and home helpers be as they were in life written in my heart, may they be certain that every morning I will bless them from heaven and look after the families where they work. I will pray for those who pray, I will pray for those who do not pray. After all, I have only loved you, I have only lived for you”. Father Erminio Giovanni Crippa.

Devotion to the Sacred Heart and social issues, two sides of the same coin. The reference to the Sacred Heart of Jesus pervades all of the Dehonian spirituality. It is a profoundly symbolic image that has always pervaded the Dehonian Congregation and Father Erminio Crippa. With Vatican II, the Church, in its pastoral praxis, took leave of this figure of devotion, so rich in fertile ideas that it was now to be the epilogue of an ecclesial season which was to be left behind definitively. The social question. It was precisely with Vatican II that the other dimension of Father Dehon’s charism emerged in the spirituality of Father Erminio Crippa, together with the devotion to the Sacred Heart, which nevertheless remained, a dimension which was already present but which now found new spaces for action: the social question. This question, which began with Leo XIII’s Rerum Novarum, is now living in a new season of the Church, the post-conciliar one, interpreting the ecclesial commitment in the social and labor fields.

A spirituality of humanity. Thus, in the context of the Council, Father Erminio Crippa’s spirituality inserted in the social sphere also recovers some of the devotional elements linked to the Sacred Heart, finding in it a new space of citizenship in the social action of Catholics. In particular, with regard to the world of domestic helpers and home assistants, especially thanks to the experiences of welcoming, even before the migratory phenomenon became a preeminent issue, “foreign” people (not “foreigners”) as Father Crippa liked to define them. The impact with immigration, which at the beginning was mainly of Cape Verdean and Filipino domestic workers (end of the 70’s) brought out the decline of the restricted cultural, ecclesial, and civil environment in which the devotion to the Sacred Heart and the social question had taken shape. It is a question of transferring the devotion to the Sacred Heart and the social commitment into the various and multiple experiences concretely lived in history. The commitment to the enlargement of experiences in new cultural, social and, ecclesial territories, according to an evangelical logic of encounter and dialogue between different worlds of brothers in a multicultural and inter-religious perspective that was going to replace the historical one of “Christianity”.

The basic question: Father Erminio Crippa, in his own way, translates into action the urgency of how to gather and interpret the social sensibility of Dehon, and to make it circulate in post conciliar sociality by favoring and nourishing a determined style of living together among different people in respect of human dignity and the promotion of the worker. Articulate in a social and political way, the evangelical requirement with a wide-ranging realistic perception of the present civil condition.

The strength to be able to evangelize this action in the social and political spheres, as a resumption and adaptation of social sensitivity, is precisely the strength of devotion as dedication which is articulated around the imaginary referent of the Sacred Heart. Because this devotion – dedication has the capacity to give “warmth to fraternity” and “right of citizenship” to people, to work, and to the Church. Devotion – dedication to the Sacred Heart as “dedication to the human” cultivates in itself the sapiential traits of a language capable of accompanying domestic helpers and family assistants in the construction of a grammar of work that has as its reference point human dignity according to justice in society. A spirituality that knows how to collect a generative evangelical mandate and a social action that becomes a responsible commitment capable of redeeming man from the slavery of work. It is a question of making the strength of devotion – dedication to the human being – the instance capable of giving social and political form to the best aspirations that men cultivate. 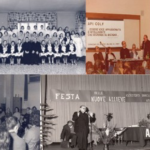 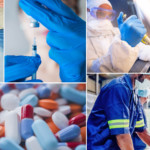