Today, surfing the Internet is not unusual. Most likely, everyone realizes how important an element in communication is the Internet and sending messages via websites and social media. However, 25 years ago it was completely new.

Before the 20th General Chapter which took place in 1997 (May 14 – June 6), the idea arose to create a website that would provide almost direct insight into what is happening at the Chapter. During the 20th General Chapter, we tried to publish comments and information about its course. These efforts to create this work can be viewed on a copy of this webpage at address: https://www.zkhuber.eu/20GeneralChapter/general4.htm.

Before 1993, when I started my studies in Rome in the field of missiology and communication (including journalism and visual communication) under the supervision of the Jesuits, I was interested in new internet technologies. In 1995, when I was already in Finland and at the University of Turku, studying Finnish, I had access to the Internet, I was able to set up my first website. Also assuming a front page for the Finnish region. These were the first attempts to learn how to use this technology to communicate.

Maybe that is why Father Tom Cassidy SCJ, who was working in Rome at that time, contacted me and asked me to take care of the technical side of the website supporting the events of the 20th General Chapter.

At the time, it was quite a challenge to use this new technology, which combined text with photos presented in an almost instantaneous way. A technical language had to be learned in which the written articles could be presented for reading. Digital cameras were also not that accessible. So the photo manipulation was completely different. Perhaps comparing the old websites with the ones that exist today, they may seem primitive. However, in their time they represented a fairly high technological standard.

Thanks to the fact that the Congregation of Priests of Sacred Hearts participated in the development of the PCN (Peace Communications Network) inter-congregation network, we had a place on the server where we could create our website.

I asked Fathers Bernard Rosiński SCJ and Tom Cassidy SCJ to write some memoirs from this period. From the articles they wrote, we can learn about the development of the PCN network and the origins of our website in Heart. I sincerely thank them for their efforts to prepare them. (Fr. Zdzisław K. Huber SCJ)

Fr. Zdzislaw Huber, SCJ, asked me to write a brief article on the establishment of our Congregation’s first webpage. He noted this is the 25th anniversary of the XX General Chapter that was the basis for an Internet presence during the chapter and to continue reporting on activities of the General Administration and the Congregation. Twenty-five years is a long time, and my memory has only limited glimpses into the past of what seems so long ago. I apologize at the outset for any misinformation I may provide. I can take comfort in saying the basic outline of my story is correct. I also take comfort in an old Irish proverb: The truth is in the telling.

In 1991 when Bishop Virginio Bressanelli was elected general superior at the XIX General Chapter, there were three ways open to the outgoing general administration to announce his election: (1) the postal service, (2) the telephone, and (3) the fax machine. The fastest was the fax machine, which most, if not all, provinces had adopted. It was then the duty of the provincial or regional secretaries to pass that information on to those houses and individuals that did not have or use the fax. By the time of the XX General Chapter in 1997, a worldwide revolution in the means of communication was well underway. It was called the Internet.

Our congregation was one of many that began to adapt to the new reality slowly and perhaps cautiously at first but over time fully embraced as one can find in the current iteration Dehonians: Priests of the Sacred Heart of Jesus.[1]

A great deal of credit for the early development and adoption of Dehonian presence on the Internet goes to the Peace Communication Network (PCN) established by many religious communities of men and women in Rome. Much of the credit for our participation in the founding and development of PCN goes to Fr. Bernard Rosinski, scj, who was called to Rome to work in the general secretariat, taking advantage of his organizational skills and familiarity with computers and the burgeoning Internet.

It was fortunate that the long-awaited major renovation of the Generalate and International College took place during this time frame. It made adapting to the needs of computers and communication much more accessible — the early debate centered on ethernet connections vs. the very early days of Wireless Communication (WiFi). Fearing WiFi was not secure, ethernet became the house standard. Over time, however, the ease of WiFi and the many SCJs coming and going to our International College and General Administration WiFi was soon added and may well be the preferred method of communication for residents and guests alike. As our sophistication and ease with modern means of communications grew, so did the Internet use and the establishment of our first Webpage. By today’s standards, it was primitive and limited in scope; however, it did seek to address the entire congregation by publishing in English, French, Italian, Spanish, and German.[2]

In these early days, all the work was done by volunteers literally around the globe. The first to offer assistance was Fr. Maurice Légaré, SCJ provincial superior of French Canada, shortly followed by the provincial secretary of our Northern Italian Province and then two SCJs studying in Rome.[3] As our webpage took shape during and after the 1997 Chapter, I was responsible for the text and articles and wrote in English.

While our significant languages were covered, we needed someone to cover the chapter, such as a journalist might. We the approval of the General and his council, I asked the United States Province if they would kindly send Mary Gorski, their director of communications, to cover the chapter and provide daily briefings that could be sent out to the congregation. The US Province was gracious in saying yes to this request, and Mary was quickly approved to serve as one of its three official journalists at the outset of the chapter.[4]

Having solved the problem of providing timely news that could be sent out via the Internet, we needed someone who had the technical skills to put the news in a proper format. For that, we turned to Fr. Zdzislaw Huber, SCJ, who at that time was a member of our Finish Region and was studying communications in Rome. By today’s standards, it was primitive. As I write this, the IX General Conference is being held in Rome and is extensively covered with both live and daily summaries available over the Internet. Given the time differences, it can also be viewed via rebroadcast on our Dehonians YouTube channel.[5]

With the experience we gained at the chapter, our weekly SCJ News came to life.[6] Following the chapter, I took on the responsability to gather weekly news and write the English text. From Rome, the text was send via email to Montréal for the French, Milan for the Italian, and the two students in Rome. They would, in turn, send their translations to Helsinki for Fr. Huber, SCJ, to format the text and post the news of the week. Due to its complexity, we agreed to post news once a week.

[2] The fog of time can play tricks with our memories and almost all I am relating comes strictly from memory. With that in mind I am not sure how long it took us to arrive at these five languages.

[3] I do not recall the name of our Spanish translator but do remember vividly that Stefan Tertünte, SCJ provided our German translation.

[5] The videos can be found on the Dehonians (Rome) page.

[6] Today we are known as Dehonians but back in 1997 the use of Dehonian was limited to a few provinces. 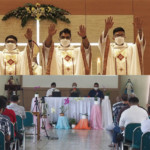 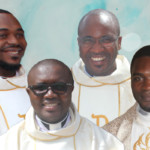 A new face of the Dehonians on the Internet

The General Council presents us with the new face of the Congregation's website, officially online today.