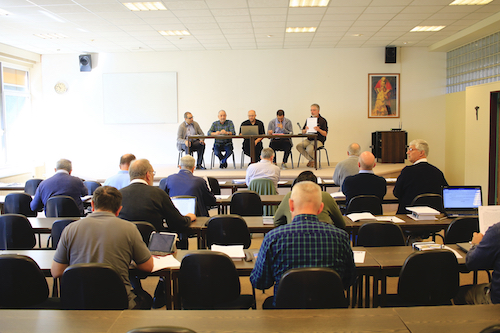 From September 9-11, 2019, a theological seminar on Fr. Dehon’s Couronnes d’amour au Sacré Cœur (CAM) was held at the Dehonians’ community in Clairefontaine, Belgium. It was organized by the European Dehonian Theological Commission.

The seminar was attended by the major superiors of the European-Francophone (EUF) Province, Portugal (POR), Northern Italy (ITS) and Southern Italy (ITM), as well as Dehonian religious engaged in formation and those responsible for ongoing formation in Poland, Portugal, Italy, Belgium, France and Spain. Also in attendance were lay people interested in the theme of the seminar.

The aim of the gathering was to provide interpretations – a sort of hermeneutical introduction – to Couronnes d’amour au Sacré Cœur, the sixth of the so-called “spiritual works” of Dehon, published in 1905.

At the end of the presentation of the reports by the director and vice-director of the Centro Studi Dehoniani (Fr. Stefan Tertünte and Fr. Juan José Arnaiz Ecker) and those of the European Theological Commission (Frs. Stefano Zamboni, Joseph Famerée, Krzysztof Napora , Amedeo Tocci) seminar participants (approximately 30) had the opportunity to talk with the speakers and then to personally read CAM guided by chosen meditations.

They shared their individual work in small groups and then each group presented what they had discussed to the plenary assembly.

The days were marked by morning prayer, Mass and vespers.

On the afternoon of the second day the group went to the Cistercian Abbey in Orval for a guided tour of the monastery. There, they took part in Vespers and celebrated the Holy Mass with the community of Trappist monks.

Fr. José Agostinho de Figueiredo Sousa (POR), coordinator of the group of European major superiors, said that the seminar accomplished its goal, that is, to put participants in direct contact with the writings of the founder.