In the year 1900, particularly in Rome, a Holy Year was celebrated, promulgated by Pope Leo XIII. What did Fr. Dehon think of it? In December 1899 he published in his periodical ‘The Reign of the Heart of Jesus in Souls and in Society’ an article about the Jubilee. 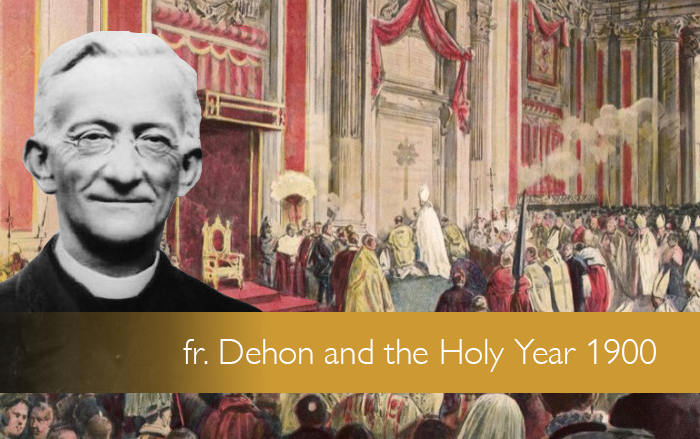 “Anno Santo – everybody in Rome is actually speaking of nothing else than about the Holy Year, Anno Santo. Fantasy is flourishing everywhere. The Holy Father is very pleased to see a large number of his children, Catholics, who will come from all across Europe, and even from farther away, in order to attain the grace of the Jubilee. It will be a religious renewal for the whole Catholic world. The attachment for Rome will become even stronger. One will pray much. God will be content with his children and with his church and he will have mercy upon the nations.” (Chroniques du Règne, december 1899, CHR 1899/340)

Dehon doesn’t fail to observe that the Holy Year is both a religious and an economic event:

“The pious people of old Roman look forward to the forthcoming beautiful ceremonies and the countless pilgrims. The hotelkeepers and dealers of devotional objects expect to see floods of gold. Anno Santo! Anno Santo!” (CHR 1899/340)

For Dehon, the Holy Year does not only concern personal sanctification, he underlines
“the social and democratic character of the Jubilee… In many encyclicals Leo XIII. has indicated the mission of the State, which is a wonderful and great one but subordinated to the Reign of God…. The social kingdom of Christ, that’s the spirit of this Jubilee… It has a democratic character, too. The Pope didn’t invite the princes but the people and still more precisely, christian people. And he is pleased to see them come in democratic organizations. The great day of the opening of the Porta Santa… all the Circles, trade unions, rural credit unions and committees were present.” (Chroniques du Règne, February 1900, CHR 1900/19)

Typically for Dehon the conclusion of his reflection on the Holy Year is marked by his own optimism and activism, especially when in France many people were moved by a fin de siècle fear.

“Let us trust in divine mercy. By the way, this desperation is good for nothing other than to weaken the soul and to paralyse the will.” (Chroniques du Règne, December 1899, CHR 1899/341)

Dehon and Ecuador: a matter of the heart

Dehon and Ecuador: a matter of the heart