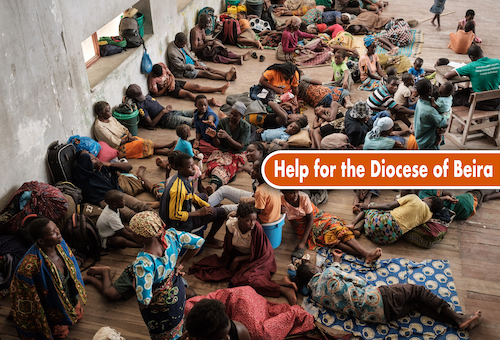 We all have had the opportunity to follow the dramatic situation in Mozambique, particularly in the Beira region. A cyclone ruthlessly struck the city. Strong winds and floods caused a trail of devastation and death. More than 400 people lost their lives and the city was virtually destroyed. As water levels diminished, international aid, including food and other basic necessities, began to come in.

As many of us know, the bishop of the archdiocese is our SCJ confrere, Fr. Claudio Dalla Zuanna, who was a member of the Dehonian General Council until he was appointed bishop in 2012.

Even the structures of the archdiocese were strongly affected by the destruction. Of its 25 parishes, virtually all suffered serious damage. Three churches were literally razed to the ground. Also damaged were the houses of the priests who work in these parishes, the seminary (the refectory and chapel were just being completed), the diocesan radio station, and many other diocesan structures. The episcopal house, which includes the offices of the curia, were completely uncovered, and therefore, the first floor, that of the bedrooms, remains open to the elements.

Several Catholic schools (serving more than 10,000 students) run by the archdiocese were also hit hard by the cyclone.

For the first emergency phase, the archdiocese has commitments through the local Caritas, which is receiving aid from the International Caritas organization and from the Caritas of various countries. Caritas helps with food security with the preparation of meals for emergency centers where people who have lost everything have been concentrated. It is distributing food kits through the parish charitable network.

After this initial phase comes the long road of reconstruction of the various diocesan structures destroyed by the cyclone.

The Archdiocese of Beira needs our help to fulfill these needs. Some entities of the Congregation are already promoting various aid campaigns and have provided economic means to support the archdiocese.

We invite all the entities of the Congregation to generously share in supporting the Archdiocese of Beira, which has been affected by this tragedy. The aid can be sent directly to the account at the “Banco Popolare di Milano” of Vicenza with the specific purpose as noted below:

Thank you for your sharing and solidarity.

We also assure our prayers for Fr. Claudio Dalla Zuanna and for all the people of Beira who are trying to rebuild their lives from nothing. May they find in our solidarity signs of God’s love.

Help for the Diocese of Beira - letter from D. Claudio dalla Zuanna

Help for the Diocese of Beira - letter from D. Claudio dalla Zuanna