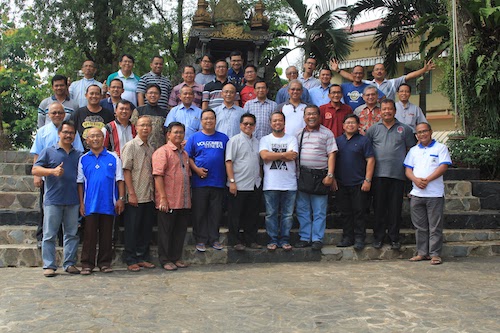 The meeting of SCJ Indonesia Medior, which is known as PSM (Pekan Studi Medior / Medior Study Week) brings together Dehonians who are at least in their 11thyear of priesthood or 15thyear of perpetual vows if they are a religious brother. The age limit is 55. Held every two years, this is considered an on-going formation program. The 2019 edition took place at the Giri Nugroho Retreat House in Palembang from April 30 until May 6; 38 Dehonians took part.

The theme of this year’s PSM was “Dehonian Lifestyle”. This theme was based on the book Le Père Léon Dehon 1943-1925: Entre Mystique et Catholicisme social, written by Fr. Yves Ledure, SCJ. Fr. Francis Purwanto, SCJ, translated the book into Indonesian with the title: Pater Leo Dehon 1843-1925: Antara Mistik dan Katolisme Sosial. As a translator and dogmatic theologian, he said of the book: “As a philosopher, Yves Ledure wrote the book with a new nuance not like other books about Dehon. Ledure critically explained Dehon’s life and his world”. 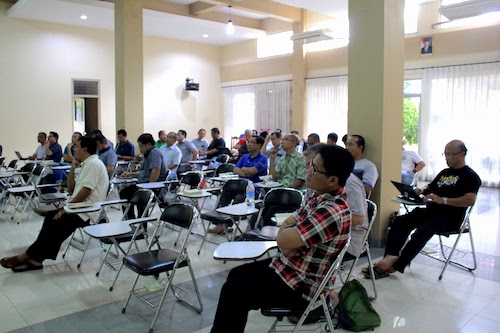 There were four Dehonian speakers, each with an expertise guiding the PSM program. Fr. Aloysius Yudistiro, SCJ, focused on Dehonian spirituality; he introduced the meeting by explaining the context of French history during Dehon’s time as a background to understanding the book. Fr. Yulianus Sukamto, SCJ, the director of Dehonian Studies in Indonesia, explained the method of understanding the book, Antara Mistik dan Katolisisme Sosial, in order to understand the Dehonian lifestyle. The method of reading and understanding the book is based on the hermeneutic approach of Paul Ricoeur. During the PSM meeting, Fr. Francis Purwanto, SCJ, as one who is learning about Dehon, gave useful input. Meanwhile, Fr. Yulius Sunardi, SCJ, as a  psychologist, gave a number of insights about the character, virtues, and spiritual values of Dehon. 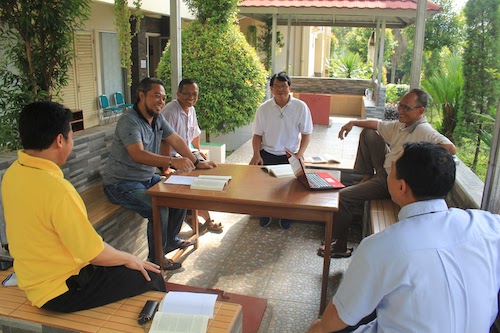 Learning together, the theme of “Dehonian lifestyle” was divided into two phases. In the first phase, Dehonians read by focusing on the character, virtues, and spiritual values of Fr. Dehon. This activity took place in groups and was followed by a presentation by each. In the second phase, the Dehonians were asked to investigate the personal characteristics, virtues, and spiritual values of Fr. Dehon which are lived by every Dehonian. In the second phase it was interesting that every Dehonian affirmed each other as a Dehonian. This affirmation became an interesting experience for Dehonians; we felt affirmed about the way of Dehon’s life. It created a sense of joy in the group. 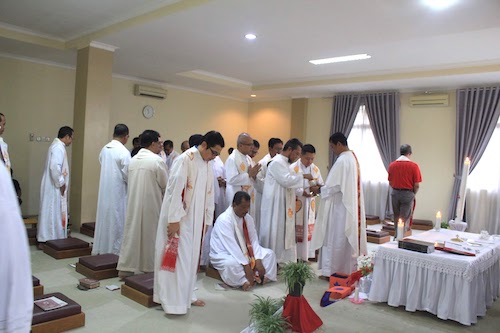 In the last session, Fr. Francis, SCJ, concluded that our Dehonian character as holy, intellectual, and apostolic religious calls Dehonians to address the social problems of society through faith. Furthermore, Fr. Sunardi, SCJ, asserted that Dehonians should become “A contemplator reflecting scientifically and a contemplator apostolating creatively”. Finally, Fr. Titus Waris, SCJ, Indonesian provincial superior, said in his homily that Dehonians are able to imitate as the beloved disciple by saying “It is the Lord” to all people. All Dehonians should be able to state “It is Lord” wherever Dehonians are living and working and to bring people to God. So, every Dehonian is called to “Dehonianization” wherever Dehonians are living and working.

Pilgrimage to the Holy Land

Pilgrimage to the Holy Land