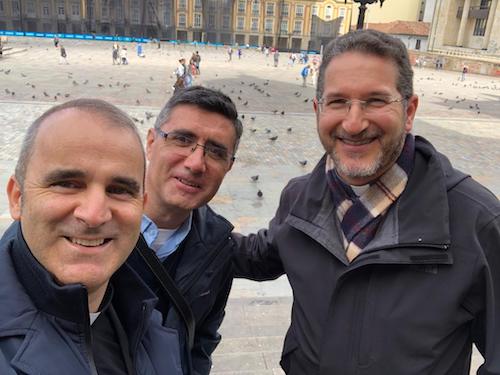 In the last week of November, representing the General Government, I, Fr. Levi dos Anjos (General Councilor) and Fr. José Luis Domingues (ECU) left for Colombia with the commitment to continue the dialogue that already started with the archdiocese of Bogotà regarding the new Dehonian presence in that city.

We were very worried because demonstrations were scheduled against the government that week, especially in the city of Bogota. The central square of the city would have been the stage for such events; and right there is the Archbishop’s see, where we were to meet the auxiliary Bishop.

To avoid unpleasant surprises, Bishop Luis Manuel Ali Herrera gave us an appointment elsewhere and also at another time, and for this the meeting was conducted without problems.

In fact, what we feared happened: the demonstrations intensified and there were many clashes between protesters and police. Unfortunately, a young student was killed. During the week there was a climate of insecurity in the city that generated a tense environment and caused the closure of some bus stations and chaos in city traffic.

Despite the uncertainties relating to public transport, we are continued with our plans. In addition to visiting Ciudad Bolívar, a territory designed for the new mission, we also visited the Usme region at the request of the bishop. It is a poor neighborhood like Ciudad Bolívar, but larger and more needy, since there is little religious presence there and also little social assistance. For these reasons we have come to decide that the new community will settle in Usme.

Fr. Jose Luis and I also visited the community of the Carmelite nuns of Vedruna. These sisters live in Usme, where they have carried out a wonderful pastoral mission for over 40 years. We have listened carefully to their experiences and also their advice to start our new Dehonian presence well.

With the support of a very committed lay person we went to visit the interior of the communities to learn about the daily life of the people: it put us in contact with the parish priests who showed us the details of those people who suffer so much from the conflicts caused by the poverty, guerrilla warfare and drugs.

Four (perhaps five!) Dehonian confreres will form the new religious community in the Usme district. They will form a territorial community belonging to the District of Ecuador and will be supported by the Spanish Province. In March this new community will gather in the city of Quito (Ecuador) to prepare adequately before beginning pastoral work.

The new community is expected to settle in the outskirts of Bogotà (Usme) in June 2020.

We thank the Archdiocese of Bogotà in the person of His Eminence Cardinal Rubén Salazar who opened the doors to us to share with that people the Dehonian way of living love and reparation to the Sacred Heart of Jesus.

Mary Immaculate protects and accompanies our new missionaries so that they can alleviate the pain of suffering families living in that territory.