Fr. Stephen Huffstetter, general councilor, is visiting with SCJs in Bahía de Caráquez, Ecuador, one of the areas hardest hit by the April 26 earthquake. He writes: 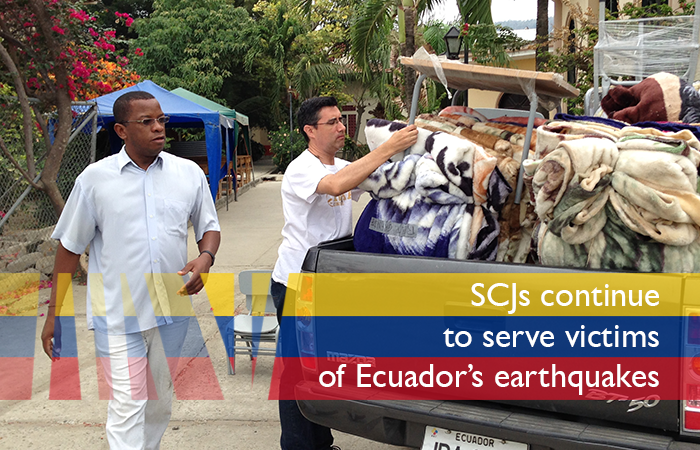 A one-hour plane trip from Quito landed us in Manta, the airport nearest Bahía de Caráquez. On April 26, an earthquake of 7.8 on the Richter scale heavily damaged the entire region. It is fortunate that the earthquake hit on a Saturday evening when many people were out and about town, and not home sleeping or at school or work. The airport’s control tower collapsed and a temporary mobile military tower is in its place. The waiting area was a series of four large tents. A camcorder on a tripod served as the security camera. Porters delivered our baggage by hand because the conveyor belts were not yet rebuilt.

Fr. Bruno Roque dos Santos, originally from Brazil, and Fr. Ramón Soriano Gil, one of the three re-founders of the Ecuador District, met us and drove us north along the coast, past palm and mangrove trees to the area where SCJ missionaries first landed in 1897. Because Ecuador was the first nation consecrated to the Sacred Heart, it had special significance for Fr. Dehon. The SCJs now serve three parishes with an additional nine chapels.

Fr. Bruno has three roles: parish pastor, superior of the religious community, and dean of the vicariate for the diocese. Normally he thrives on lots of activity, but the earthquake relief work has at times left him feeling drained. The Church has been a reliable institution in which relief groups can turn to in order to put food and relief supplies directly into the hands of those who need it most. Fr. Ramón is in his late 70s and after almost 20 years of walking barrios and visiting the sick, he is well known and loved throughout the town.

Sagrado Corazón (Leonidas Plaza) church parking lot was partially occupied by tent canopies. A dozen children were taking part in their Saturday catechism classes. The high school students are preparing for confirmation, and the younger students learned about the Trinity. Their normal classrooms are still under repair. Cracks in the church were visible, and it cannot be used for liturgies until structural damage is repaired and the roof replaced with lighter materials.

In the meantime, the church has become a staging area for relief supplies. Inside I found cement bags and diapers, coloring books and cooking oil, beds and mattresses, blankets and bottled water.

We drove through town exploring the earthquake damage. Some entire blocks have been leveled. The worst hit seem to be the wealthier high-rises near the ocean, which are uninhabitable, and the poorer cement and brick homes built high on the hills which buckled and collapsed entirely when the earthquake and aftershocks hit. Ironically, many of the poorer homes in the country made of wood and cane survived because they are not rigid, and swayed and bent rather than broke. Roads buckled, and a major task has been repaving long stretches of highway, and in some cases, rerouting the roads. Tents and tarps abound. Three months after the earthquake people still live in temporary basic structures. Many residents have moved to other parts of the country away from the destruction. The economy is struggling in Ecuador as a whole, and the destruction here has only compounded the problem. For workers whose average salary is about $325 per month, home insurance was never possible.

On a hill overlooking the city a large cross stands as a sign of faith and hope. The panoramic view was both beautiful and sad, because it gave a perspective of all the damage. In Bella Vista the chapel totally collapsed and has been demolished. There we visited a feeding program and saw many pre-school children eating lunch. The cooks also boxed up meals to be taken to the home bound elderly.

We passed a high school, totally unusable. An empty lot stood where another school has already been leveled. When school starts again in a few months, where will the students attend classes?

The plaza in front of Our Lady of Merced Church holds a tent city. We also passed rows of tents on the outskirts of town.

At San Jorge church, we saw how the bell tower pulled away from the main building. The office and meeting room building slants noticeably. Workers laid new floor tiles after leveling an eight-inch drop in the main floor. The disaster has caused lots of displacement for normal group meetings and parish programs.

The Priests of the Sacred Heart have tried to help with housing. At Albergue Sagrado Corazón, one such temporary housing site, metal structures about the size of a backyard tool shed serve as shelter. Blankets draped over the metal add warmth and protection from the wind. People cooked and socialized outside. An elderly woman had her bed brought outside the house so she could be part of the crowd until it was time to go in for the night. While life is hard, people are grateful for the help with meeting basic needs for the moment.

The town resounds with the sounds of both hammers and wrecking balls. We visited two housing construction sites. The SCJs have helped build 17 homes, which rise above cement pads on stilts, and are connected to water and sewer. They cost $3,000 each. At another site we watched workers cutting wire in preparation for prefabricated walls to be brought in. Those homes cost $8,000. In the aftermath of past earthquakes in Chile and Perú, builders have learned what can be quickly and inexpensively built that will work in the area.

At St. Rose of Lima Church in neighboring San Vicente, we were invited to join a prayer circle of high school volunteers preparing for a service project in a badly damaged part of the region. As we formed a circle, arms draped over each other’s shoulders, I heard many heart-felt petitions as they recalled the needs of their community.

Fr. Jónathan Martínez Gragera is from Spain and has served Bahía for the past six years. The earthquake followed the previous year’s drought, a double hardship for the people. The biggest pastoral challenge is to be a listening ear and support people who get discouraged and tempted to lose hope. After three months, so much yet remains to be done. As pastor, social worker, counselor and listening ear for so many traumatized people, it is a challenge.

I saw Fr. Jónathan counting the weekend collection. Amid a pile of coins, I saw two 5-dollar bills. The average salary here is about $75 per week, and the collection brought in $125. Ecuador uses US dollars as its currency. The Sacajawea dollars, which never caught on in the US, are commonly circulated here because of their durability.

Carlos Alonzo Vargas, from Venezuela, has ministered as a deacon for over a year. He began work in Ecuador in March, just one month before the earthquake changed everything. Beside parochial ministry, he finds great meaning reaching out to the nearby prison.

Life can and must go on

Life can and must go on