“Sentinel, how long until the dawn?”

Dear confreres and all the members of the Dehonian Family,

In northwestern Mozambique, in the province of Zambezia, the Dehonian Family has a significant presence. The SCJ religious, the Missionary Company and lay groups such as the Family of the Sacred Heart collaborate in pastoral, social and educational works. Each group seeks to live and share the Gospel in their unique way. Over time good fruits have not been lacking, but neither have the difficulties. One of the biggest, without a doubt, was the war that ravaged the country from 1977 to 1992. It was a bloody period in which, in addition to the atrocities committed by the opposing sides, the missions and assets of the Church were expropriated. Many activities ceased and the Christian communities, already scattered over a huge territory, became even more isolated and distant from the company of the missionaries.

Nevertheless, the vitality of those communities did not stop. Although they were rarely able to celebrate the Eucharist, they were not resigned to depriving themselves of it. So much so, that those in charge agreed that on designated dates some of them would go to the neighboring country of Malawi to receive the Blessed Sacrament and bring it back to their villages, where everyone could adore and share. It was a long journey, lasting more than a week, avoiding countless dangers. The route was risky. They walked at night. During the day they stayed high in the trees, resting, and hiding from armed groups. Meanwhile, other members of the community were busy tending the cultivated lands of those who had gone in search of the Bread of Life. All were attentive and available to serve.

Deeds like this are not unlike those experienced by other good people, long before, in the land of Judah. We know them. It was a group that herded flocks in the region and men of science who came from further afield. Both, from different routes, met in Bethlehem. The shepherds arrived encouraged by the Angel of the Lord and their own decision. The wise men, in turn, reached the city of David served by their own knowledge, the guidance of a star and even the indications of a fateful ruler.

Both, as well as the Christians of Zambezia, took risks when leaving their place and their daily occupation. They had to overcome the uncertainty of the night, the tricks of Herod or the violence unleashed, often camouflaged in fields seeded with mines. However, because they knew well whom they trusted, they left behind their own people and their daily routines. In fact, when they reached their destination, none were disappointed before the surprising mystery they would contemplate. The shepherds and the wise men encountered the simplicity of Mary, the proven love of Joseph and the tenderness of the newborn, “Savior, Messiah and Lord” (Lk 2,11). The community envoys from Zambezia, on their part, contemplated the mystery of the Child made Bread himself who, without any reservation, was entrusted to their calloused hands to become displaced with them and a companion on the way.

Witnesses of the Good News, these true worshipers of the living and incarnate God reveal to us the dynamism of the vocation of adoration that we share. As Pope Francis reminds us, “once we lose the sense of worship, we lose our direction in the Christian life, which is a journey towards the Lord, not towards ourselves.” (Homily on Epiphany 2020). It is precisely the same path that “makes us attentive to the love and faithfulness of the Lord in his presence to our world” (Cst 84). It is the “being attentive” that frees the Christian life from simply being immobile sentinels in towers, capable only of verifying the passing of time (cf. Is 21,11-12). Quite the contrary, the mystery that we celebrate motivates us to enter into the style of God, who is deeply involved in history and its vicissitudes, to dispel darkness, dignify life and repair the many breaches.

It is a question, then, of contemplating and accepting what happened in Bethlehem as a gift that calls us to collaborate with Jesus, the faithful Word of the Father, in favor of this humanity that he loves so much. Mary did so by offering her availability without condition. Joseph offered his loving solidarity. The shepherds and the wise men responded with the joyful announcement of what they saw. All were servants with no other ambition than to give glory to God by guarding life against all threats and marginalization.

May what happened in Bethlehem keep us from living distractedly without the light of the Word, who has so much to tell us (cf. Mt 4,16-17). We need to hear him, welcome him and follow him, like the family in Nazareth and those determined Christians of Zambezia. Like them, may our hope be joyful and at all times rooted in Jesus, Good News for this world, home to all. We also ask this for our upcoming General Conference. May his Word help us to “be attentive” as disciples to adore God and serve his people as neighbors. Finally, may the celebration of Christmas teach us to “contemplate the daily miracle of charity” (Fr. Dehon, Le Règne du Cœur de Jésus, June 1902). 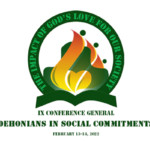 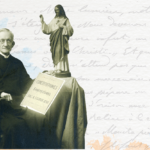 “With the Word in their arms, they joined the fugitives and refugees”

“God entrusts to Joseph what he loves most”

“The unexpected happened: God approached him”

“Her womb and her world were opened without reservation to Life”

“The greeting she received startled her, but she did not try to escape it”