Ecclesiology and a pluralistic world 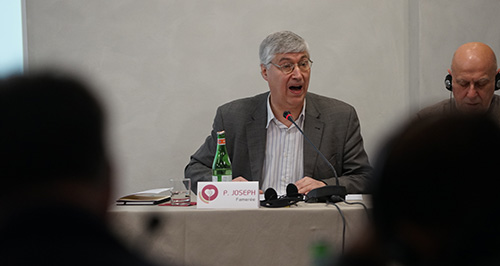 The meeting of Dehonian bishops had a rich contribution from Fr. Joseph Famerée, SCJ, professor of theology at the Catholic University of Louvain (Belgium). He is also a member of the International Academy of Religious Sciences, is part of the European Association of Catholic Theologians and the Dombes group. He has written numerous publications on Yves Congar, Vatican II, ecclesiological issues and ecumenical issues. In his presentation he addressed the ecclesiological theme, linking it to Dehonian spirituality.

The Church does not exist for herself, she is at the service of the Kingdom of God for the world. This is the famous beginning of the Dogmatic Constitution on the Church Lumen Gentium (LG 1). A missionary Church is, fundamentally, a Church that refuses to install itself in this world, as if it were its last destination; it is a Church that nourishes spiritually, liturgically and theologically with the expectation of the second coming of Christ (Ap. 22,20). 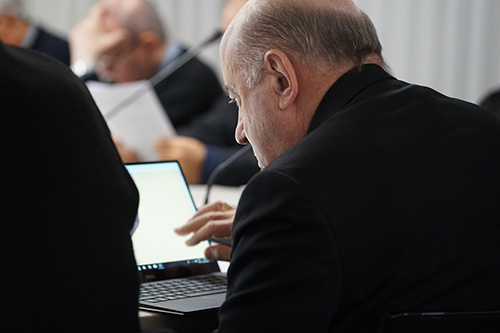 A Church in ecumenical dialogue

This missionary need is inseparable from the ecumenical need for a dialogue between Christians. It is this exciting question that we must always deal with, and it is not without impact on the quality and the (Catholic) wealth of the proclamation of the Gospel by the Church. This question will not find a definitive solution during human history, but it is important to work without pause between Churches, between different Christian traditions, so as to anticipate certain temporary realizations of a visibly diversified communion. Simultaneously and symmetrically, there are common issues between the faith traditions. The insistence of Fr. Dehon on the Sint unum for his religious urges us to be seekers of unity and prophets of reconciliation, first among Christians. This search for unity and reconciliation must also enhance all legitimate differences, because they do not oppose one another but are constitutive of unity. 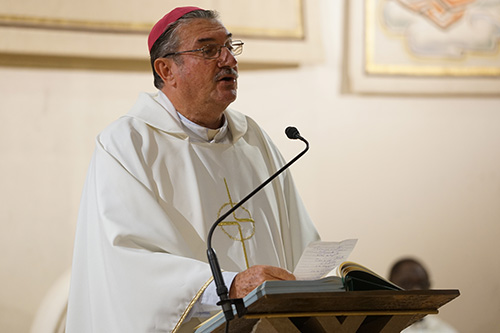 A Church in exile and in the diaspora

The contemporary migratory question pushes towards an anthropological and theological reflection. At the anthropological level we know that in order to recognize oneself one must come out of oneself to meet the other. On the theological side we find that a Church that has always been a “migrant” cannot but be supportive of new migrants.

In the present history, the existence of a Church always appears in tension between meeting and dispersion (in view of the mission, but also in terms of circumstances: persecution, geography …). This rich and dynamic vision of the Church as the People of the new Exodus and of the new Diaspora has powerfully impregnated post-conciliar theology and ecclesiology, especially Liberation Theology in Latin America. This notion of God’s people, when it tends to be rarefied, is supplanted by the vague, Church-communion one. In this way there is a risk of losing the dynamic, living, flexible, or rather anarchic, aspect of a Church-people for the benefit of a Church understood exclusively as the Body of Christ in a rather rigid and hierarchical sense. For the Dehonian, this attention refers to the reparatory dimension and the availability to the signs of the times. 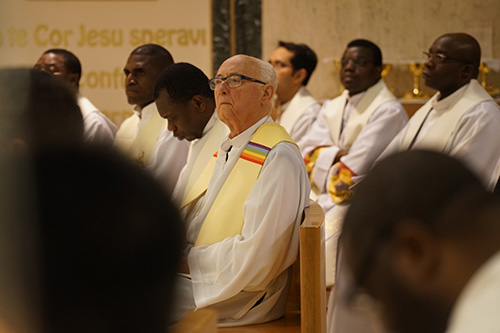 One last aspect was directly addressed to the bishops was to rethink a dimension of communion. On the basis of a plenary theology of the local Church (diocesan, episcopal), it is necessary to think more in the Catholic Church of groups of local Churches in autonomous regional Churches, in the sense of a more intensive “horizontal” communion, beyond a “vertical” relationship between each bishop individually and the pope. Also, at the level of the universal Church, understood as a communion of Churches, one cannot but think and exercise the singular ministry of the bishop of the local Church of Rome in synodality or effective collegiality with other bishops. Such a change in the way of governing the Catholic Church can only be progressive and gradual, given the heavy tendencies of the monarchical style inherent in the Catholic tradition. 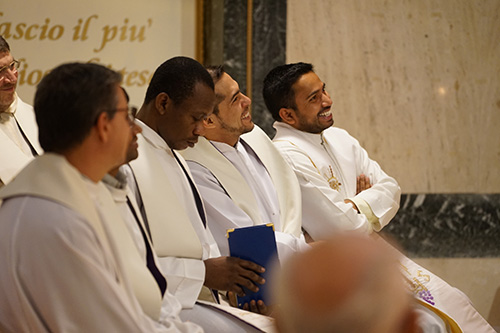 Attention was given to priorities ad extra, to accentuate the logic of the service of the Gospel. Important is attention to the ecumenical, even if it is not lived with equal force in all contexts, because it is the credibility of the gospel that is at stake with the division of Christians. We have touched on important aspects of doing and being Church, breathing new paths and being more capable of welcoming and listening to what is manifested.

The Dehonian bishops in Loreto and Quarticciolo

The Dehonian bishops in Loreto and Quarticciolo