A long life dedicated not only to pastoral service, but to art and music. At the age of 93, he was still creating works of art. Who was Fr. Herman Falke? A Dehonian artist.

Fr. Herman Falke has had his hands busy working on what he says is an “intentionally complicated” wood carving.

The 93-year-old retired priest and artist’s latest work depicts a scene involving people waiting at a bus stop. Some wait while sitting on a bench, some read the newspaper, others hang around relaxing or sitting on the floor. Due to its intricacy, Falke is contented to suspect the project will keep him occupied for a month or two. And that’s OK with Falke at this stage in his life.

“I’m looking for pieces that are complicated, time consuming and pleasant at the same time,” he said. “I’m still doing my art but I’m doing it for more psychological reasons. I want to keep busy and physically and mentally involved.”

Falke’s work is known to many the world over but specifically to Catholics in southern Ontario where he has served in the London, Toronto and Ottawa dioceses.

Some of Falke’s best-known works come from his time in Toronto. In 1986 he began pastoring at St. Joan of Arc Church where he served until 1992. It was a time when immigration to the city was soaring and the archdiocese was building new churches to serve the growing number of Catholics flocking to the area. Falke was called upon to create Stations of the Cross for the emerging places of worship, and began to churn out one set annually.

“During the year (the parish) was always very busy,” said Falke, who pastored to 1,700 families at St. Joan of Arc. “But suddenly in the summertime nothing happened there. People went to their cottages and I was sitting there and it brought me to the idea of doing a complete set of Stations of the Cross each year. It was to get myself occupied in the summer when it was mainly just Mass on Sunday, weddings on Saturday afternoon and that’s it.”

A painter and sculptor, his various works can be found around the city, including Sacred Heart of Jesus, a Korean parish in Etobicoke, and St. Thomas More Church and St. Rose of Lima Church in Scarborough.

From Toronto, Falke moved on to Ottawa where he served at St. Monica, St. John the Evangelist and St. Brigid’s. He also taught and was chaplain at Immaculate High School until retiring in 2010.

Falke took to art early in life. Born in Holland in 1928, by 1940 Falke had joined a junior seminary with the missionary Sacred Heart Fathers. He survived the war years during the German occupation of Holland and as a teen began working on religiously-themed ceramic figures while also playing music for the seminarians.

By 1950 the order sent him to southwestern Ontario to mission to recent Dutch immigrants. He was ordained in London in 1954 and completed his bachelors at King’s University College at Western University, graduating in 1958. He began teaching art and music at a junior seminary there.

By his late 30s, Falke was ready for a new challenge, one that would take him all the way to Uganda from 1966 to 1974 — years that transformed him as an artist and a person. The Frères de l’Instruction chrétienne, who had the leading schools in East Africa, were looking for priests to serve as chaplains and teachers. It was the perfect assignment for Falke.

What struck him most during his time in Uganda was being able to observe everyday life which he says took place right “out in the open” in a way that was different to western world and he found fascinating as an artist.

“African life is so much at the surface and so open,” said Falke. “You see life which you never see in western Europe and North America. It’s right there on the street level. You see how they take care of their children, the kind of discipline and their contentment with very simple things. It was a life that was really beautiful. Their customs, their dances, life was right in front of you.”

His African-inspired paintings show the bustling movement of African life, through peoples’ rituals and everyday activities. Fascinated by the display of everyday human interactions, it remained a central theme of his pieces beyond his time on the continent. His unique style as an artist took shape, adopting a more contemporary feel even through depictions of traditional biblical scenes.

“Before (Africa) his attitude towards art was more conventional traditional Catholic looking art, which was based upon the Renaissance,” said Michael Walsh of Mosaic Press, editor of Falke’s upcoming autobiography, Celebrating a Life in Art, set for release this fall.

“After the years in Uganda, the whole theme of his religious pieces involved different ways of interpreting what’s going on with the characters in the Old and New Testament. Uganda suddenly becomes the turning point in his whole response to art.”

How Uganda transformed him is the focus of an entire chapter in the autobiography.

The brutal dictatorship of Idi Amin Dada in 1971 brought an increasingly dangerous Uganda. News of murders and students going missing spread around the world, consuming his family in Holland with worry. Concerned for the psychological and emotional toll on them, Falke made the difficult decision to return to Canada in 1974.

“My mother was reading about it in the news in Europe and knew more about (what was going on) than I did and she was developing ulcers,” said Falke. “So my sister said, if you want to see your mother alive, you better come out. That was the final straw that made me leave Uganda.”

The return to Canada brought more transformation to his art. Here, sculpting took over his work. The style may have changed, but not Falke’s penchant for capturing ordinary human activity and interaction. It’s seen in a piece on the 9/11 attack on New York’s Twin Towers. Moved by a Time magazine photo of firefighters cleaning up after the towers fell, he created a piece depicting the scene which despite the tragedy, he saw as hopeful and inspiring. It was quickly picked up by an American doctor. He would create others in tribute to that fateful day. He considers them amongst his greatest work.

Though his style as an artist has a contemporary feel, when it comes to technology, Falke remains quite the traditionalist. He owns no cell phone or computer. As mentally astute as ever, the former teacher submitted the first draft of his book’s eight chapters, handwritten with the pictures glued in where they should go.

“I had to scramble together to get a draft on a computer file,” chuckled Walsh. “(His draft) was letter perfect and grammatically perfect. You name it. It was a clean cursive text. He even (later) corrected me where he said I forgot to put a comma in some paragraph.”

Though his work life has slowed significantly since his days pastoring parishes and teaching art, creatively he continues to produce. The Ottawa residence where he’s lived with other priests for roughly the past three decades brims over with his art. 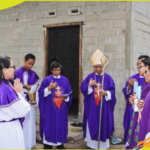 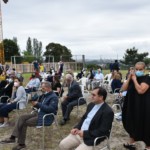