The movement of people creates contacts between different cultures, creates “non-places”, which are still inhabited, but by whom? And what happens in these “non-places”? Of the middle places, of the borders, where one is neither inside nor outside, and at the same time one is paradoxically inside and outside. 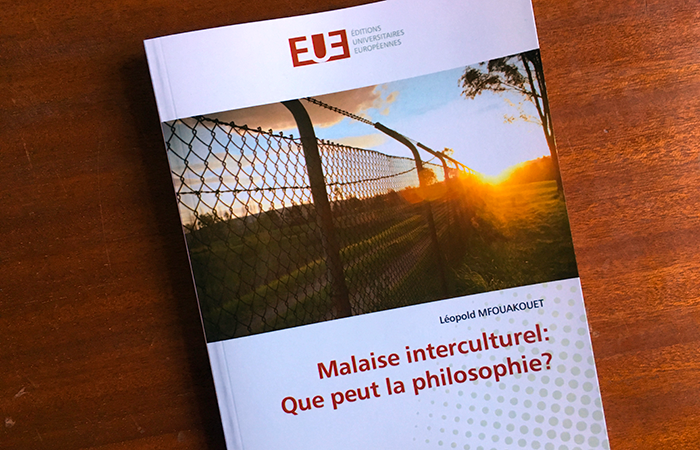 It is starting from these questions and the problems that arise from them that Fr. Léopold Mfouakouet, SCJ, in his book – Malaise interculturel: Que peut la philosophie? (Intercultural Malase: What can philosophy do?), 105 pages, published by Editions Universitaires Européennes – aims to address the issue of intercultural discomfort. The author wonders whether it is reasonable to think of a common world, taking into account identity conflicts, and interpreting these in terms of intercultural discomfort. He questions the intercultural nature of social psychology, its limits, those of multicultural theories, and the stakes in the transition from acculturation to interculturality, and into the oblivion, by some theologies of inculturation, of the intercultural breakthrough.

Beyond this problem that affects “inter-disciplines,” the author practices a philosophy learned from the ground up, where the question is: what is there between the cultures? We must not forget that in these movements, it is not primarily the cultures that are in contact, but people, rooted in their historical and relational networks.

Perhaps we must also take into account an aspect often given little consideration but which has had much influence: the climate. And it is precisely climate change that could be among those reasons responsible for the migratory movements that are currently underway, and which will increase as the climate continues to change.

In the book some metaphors are used to introduce the idea of a “common world”. Among these, we refer to a boat, which brings to mind Noah’s Ark, but which today is identified with the boats carrying migrants, human beings, with all the dramatic consequences that come from them and are known to all. But if society has become like a boat sailing in the storm to save mankind, is it permissible that the sailors continue to argue with each other, especially when this “boat” is about to sink and there are no lifeboats from which to abandon it?

It is an interesting work, which deserves to be read, both by those who deal with these issues, but also those who simply want to deepen them, to try to grasp the most diverse aspects, which can help to better understand the various facets that the phenomenon presents.

India: "We believe unity to be possible"

India: "We believe unity to be possible"