Mark Peters, US Province JPR director, talks to panelists before the start of the presentation.

“Whatever we imagine, we can do. We can change things”

Who are today’s refugees? 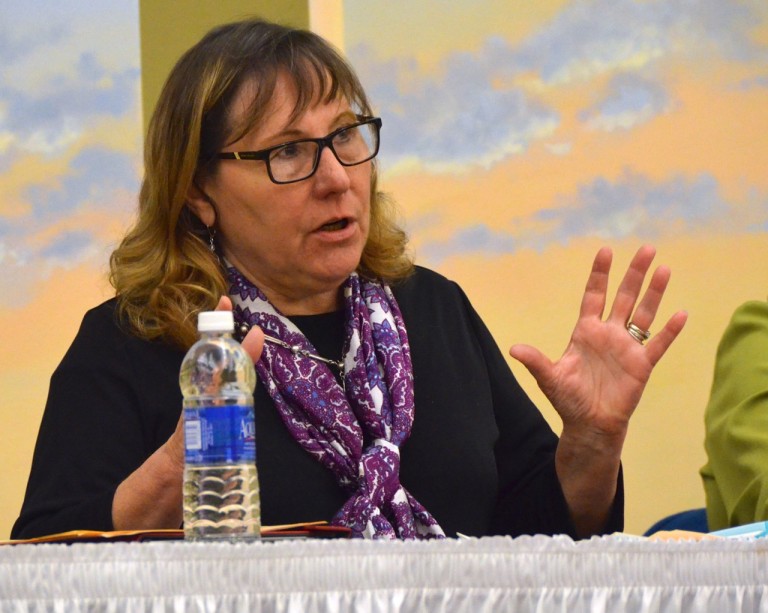 The countries of the Middle East are the largest source of refugees, said Prof. Cainkar, “But they have also taken on the greatest burden,” she added. Among them “they host more than 30 million refugees.” Turkey has the greatest number, but Lebanon and Jordan also welcome a considerable amount.

“These countries have been taking in Syrian refugees since 2011; yet it only was termed a ‘crisis’ when the refugees began arriving on western European borders,” she said.

More than 50 percent of the refugees are children; many of the most vulnerable are women. They represent a wide variety of religious groups, social, cultural and economic backgrounds. 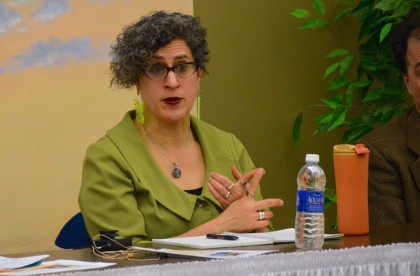 Reflecting on the youngest immigrants crossing the southern border of the United States, Prof. Buff reminded listeners that it is only out of an incredible sense of desperation that parents send their children on such a journey, alone, across multiple countries.

“I am a mother; I would not send my child off unless I was desperate, fearing for my child’s life,” she said. “We have to respect the circumstances that these people face.”

Once these children, or any migrant arrives in the United States, there is then the struggle to find a way to stay in the country.

Prof. Fallone said that the United States grants refugee status to people who are in imminent danger, such as activists receiving death threats because they are working for change in their countries, and people who belong to persecuted religious or ethnic groups.

“But the vast number of migrants are neither activists nor targets,” he said. “They are simply victims fleeing wars, drug lords and natural disasters. We need to create a lawful way for them to come to the United States.” 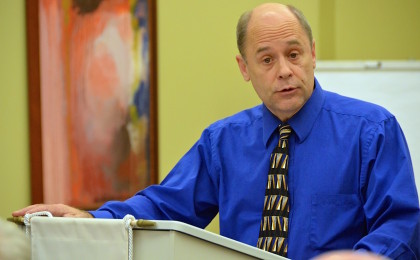 He spoke about the large numbers Vietnamese that the United States welcomed following the exit of US troops from the country. “The United States accepted responsibility for the mass movement of people from Vietnam following its intervention,” said Prof. Fallone. “We felt a moral obligation.”

Many argue that US intervention in Iraq led to people fleeing  it and other Middle East borders, “but there is no discussion of how our invasion of Iraq led to the country’s destabilization,” said Prof. Fallone. “What is our responsibility in this crisis?”

The panelists also talked about the economic impact of trade agreements, such as NAFTA (North American Free Trade Agreement). Although it created one of the largest free trade zones in the world, it also dramatically changed the lives of Mexican farmers who could no longer compete with large agri-business growers. Seeking work, these farmers often head north to the United States.

“Historically, there has long been an ebb and flow of Mexicans crossing the border for work and then returning,” said Prof. Fallone. Ironically, now that the southern border has become more difficult to cross, those who do come to the United States illegally often stay. “And because they do, they send money so that that their wives and children can join them. The fence is counterproductive.” 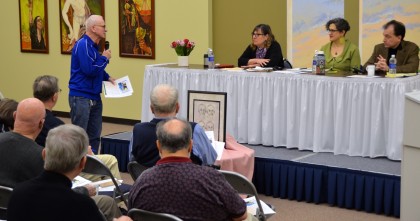 “Whatever we imagine, we can do,” said Prof. Buff. “We can change things.”

The laws regarding who can become a citizen, who has access and rights to health care, schools, jobs and even voting are determined by laws that are always open to review and change. “There are many ways to think of citizenship and rights,” said Prof. Buff. “We can change any law…

“When I think of the great civil rights battles in the United States, the abolitionist movement, women’s suffrage, equal rights; those movements succeeded because people emphasized the commonality of humanity. They said, ‘we are all the same, not different.’” 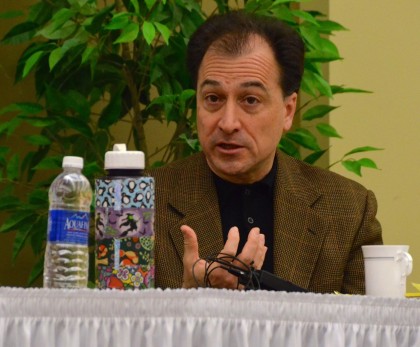 That is the message, the panelists said, that needs to be heard in regards to migrants.

“Migrants deserve to be treated like humans, they deserve a meaningful life,” said Prof. Fallone. “Why? Because we deserve a country where we are welcoming, where our leadership respects human rights.”

“We need to take in refugees and treat them with dignity,” added Prof. Cainkar. “Destroy stereotypes with conversations. Invite a Muslim to talk to your congregation; there are organizations that can provide speakers. Build bridges between people to take down walls. In the pulpit invoke Catholic teachings. Build compassion. Pope Francis is such a good role model for this.”

Prof. Buff encouraged people to “Listen to the young. Young voices are speaking on so many issues. Listen to people who don’t have power; they are often speaking a ‘truer’ truth. There is an ethics to listening. You do not have to agree with others, but you must listen to them. They are crying out for justice.”

He urged faith leaders to encourage a sense of welcoming; eventually political leaders might do the same.

“Faith-based communities have to say it is good to welcome the stranger,” added Prof. Buff.

He noted that in recent years conservative movements have used the same strategy to chip away at many civil rights. “We have to keep fighting,” he said.

“Just show up; it matters,” said Prof. Buff in regards to protests and other public efforts. “We have to inspire each other. What we do individually really does matter.”

“I was deeply moved by the knowledge and experience of the speakers, and I realize I/we have much to learn,” said Fr. Jim Schroeder, SCJ, about the presentation. “It is so important to see immigrants as people like ourselves, desperate to escape violence and misery, even through danger and hardship, to have a safer, better life. My parents’ families did this. It is critical we keep showing up and struggling on the streets, in the legislatures and courts, for comprehensive immigration reform as the U.S. Bishops encourage us to do. Love of Christ and His people impels this offering of ourselves.”

“What an excellent program on immigrants and refugees!” said Mary Pat Utech, a member of the Milwaukee Archdiocesan Justice for Immigrants Committee. She also volunteers with Voces De La Frontera, a Wisconsin organization that campaigns for immigrants’ rights. “The speakers were knowledgable, personable and experienced.  I have been working on this issue for at least ten years and I still learned valuable new information that I can bring back to congregations and my work.”

Fr. Jan de Jong said that he “found the presentations on migration extremely informative. The participants of the panel broadened my understanding of this worldwide problem which is very complex. There exists so much misunderstanding about the Islam, the Shiites, the Sufis, Sharia, etc. We are easily caught up in our own prejudices and mis-information provided by the media.

“I thought this was a important step of the Immigration Committee to provide us an educational opportunity to begin to comprehend the multiple aspects of this dominant issue in our contemporary world. There is hope, as one of the panel members professed. My sincere thanks to the committee and to the presenters for the fascinating panel discussion. We need more such educational opportunities on migration.”

The US Conference of Catholic Bishops devotes an extensive section of its website to immigration issues, including resources about the Church’s teaching on immigration. Click here to access it.

Listening to a question from the audience.

A dose of conflict

A dose of conflict