Happy Birthday, dear Leo Gustav Dehon!Notes for those who follow in his name....

Restraint, prudence, and modesty are important virtues. The Bible is not just wise regarding this, taking a critical position towards accusations and judgments. It is also and above all a testimony of the first Christian communities. In this regard, it should be noted that the following lines perhaps say more about me than about Father Dehon. One might doubt if he would find himself in them.

We must see Fr. Dehon in his time and context and understand him with the people who surrounded him. No human being is alone in this world. We are involved in networks and for this very reason we are unique. From today’s perspective, Dehon was certainly privileged, but he also found himself in difficult environments. For the first point, we should keep in mind his financial and family baggage; but also the biting culture war in which he found himself.

Sometimes Dehon was mild, but often determined. He gives the impression of an entrepreneur who founded a start-up. He consistently moves forward, distinguishes himself as a leader and doer. The fact that “you can’t make an omelet without breaking eggs” is part of it, but at times it makes you think. The fact that he “stopped cold” a Joseph Brugerette when Dehon was a consultor at the index, that hurts me – to be honest – a bit. It was probably not so forward-looking. On the other hand, I would not be writing these lines if Dehon had not had a certain assertiveness. That seems to be a law of our life.

His spirituality enabled Dehon to take defeats. He was convinced that Providence guided him; he had the gift to look ahead, to explore the possible. In particular, his closeness to nature and his pronounced love of travel shows him as an optimistic person, as curious, open and enthusiastic.

It is difficult to get close to him. Many of the texts he produces are imbued with the idea that he wants to portray something of himself, as well as convey a message. That’s where his letters are probably the most meaningful. Humor is not missing, encouragement is a common thread in them. A focused leadership style, which has already been mentioned, comes to light. E-mails and text chats would probably have pleased him. He is a master of precise communication.

One could say a lot about him. For example, sometimes it might have been better if he had kept quiet. But that is probably true for all of us. On the other hand, he was committed to Christian democracy. He wanted to help shape the world according to his thinking, the possibilities he saw. Who could blame him for that? I see in him a religiously imbued man who loved the Magnificat. That connects us both; here we have a common wavelength. His option was for the poor, he was socially committed, and not only on the surface! He freely criticized leadership.

Dehon can be considered a thoroughly ecclesiastical person – Christocentric, oriented to the “lifeblood”. He wanted to focus, to get to the essential. He obeyed, if not always his superiors in exactness, his faith community. He perceived this as a mystical space – also diachronically, throughout history. He was a controversial person from the beginning because he made a difference. And he knew that, too, and was able to deal with it productively. I believe that he was not vindictive, and in the end was able to see the good in all people.

It is because of his great work that the Congregation exists as a religious community. He is by no means the only one, but he is a main pillar of this institution, of your community! From the history of the Church, we know how important such communities are for the life and future of our Church. Images like that of the Heart of Jesus are “generated” there, they are catalysts of piety for a long time and important spiritual fathers and mothers who deepen life and make possible –– at least a little –– “life in fullness” and “heaven on earth”.

For this we thank the birthday boy! Next year, on the occasion of his thoroughly biblical 180th birthday, there should be a more dignified eulogy – preferably not from me 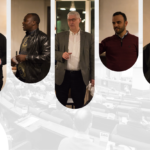