The Prologue of the Gospel of John that we meditate on this day is not only an introduction (pro-logos) to the fourth Gospel, but it constitutes the highest synthesis of all Scripture since it presents its fulfilment. Everything that was announced in the Old Testament by the Word of God, which has now become flesh, achieves its full realization. In the first two verses, John, using the expression “in the beginning“, does not refer us to a purely chronological aspect to indicate that what was at the beginning of everything, or even how it all began, but taking up the Book of Genesis, whose first expression is identical to that of the Prologue, our author makes us immerse ourselves in the great mystery of God’s love, who, calling into existence everything he created, announced his plan to come and live in this beautiful house that he built. However, he did not just want to dwell among the beings he created, like a stranger, but pitching his tent to that being who was created in his image and likeness. With this expression (“In the beginning“), John reminds his readers of the indissolubility and interdependence of the two Testaments, for the New does not discard or make obsolete the Old, nor does the Old suffice itself without the New.

The translation of the Hebrew expression (bereshit: in principle) can incur a semantic distortion if one considers only the chronological aspect (beginning, beginning), but its scope goes beyond that. A single word in Hebrew (bereshit) formed by three others (be: em/ rosh: head/ it: indicates an abstraction) points to the creative act of God as the foundation of everything, not only marks the beginning of a story. It is said here that the creative Word of God was in principle (Greek: arché), this principle sustains everything and gives meaning to everything. Therefore, without the Word everything becomes or continues to become chaos and confusion, one loses his reason. That is why it is said: “It was the light of the truth that, coming into the world, enlightens every human being“. A human being who comes into the world but does not encounter the light of truth remains in the primordial chaos and confusion, does not reach the fullness of life. Jesus affirmed: “I have come that all may have life and have life in fullness” (10:10).

This theme of light permeates all Sacred Scripture: from Gen 1:2, “Let there be light” to Rev 22:5, “The light of the lamp will no longer be needed, nor the light of the sun, because the Lord God will shine (Greek: photosei, it will shine) on them“. For the Old Testament, the association of light with the Word of God is evident: “Your Word is a lamp to my feet and a light to my path” (Ps 118:105). For John, this light is Jesus himself who affirms: “I am the light of the world, whoever follows me will not walk in darkness but will have the light of life” (8:12).

On the other hand, although the light shines intensely, some reject it: “He came to his own, but his own did not receive him“. However, the darkness could not imprison the light. By faith, those who let themselves be illuminated by the light of truth “receive the power to become children of God“, because the Son of God, the eternal Word: “became flesh and dwelt among us“. Although the syntactic construction allows us to distinguish the two actions (becoming flesh and dwelling), we cannot separate them, because dwelling among us took place at the moment that this Word became flesh, assumed our condition. Paul himself makes it clear to us that our life here is like living in tents, that one day they will be undone: “We know that if our earthly dwelling, this tent, is destroyed, we will have in heaven a building, the work of God, an eternal dwelling, not made by human hands” (2Cor 5:1). Jesus, in this same perspective, speaks of his body (the tent that he assumed) as the temple that, even if destroyed, will be erected definitively in three days (cf. 2:19).

This theme of the tent that the Word, when incarnated, arms among us and in us (Greek: en ‘umin) unites Christmas with the Paschal Mystery, because the highest revelation of who this eternal Word is, who assumed our condition, received a name, Jesus Christ, through whom “grace and truth have come to us“, and will be given in his hour when his glory is manifested. Glory already anticipated at the wedding at Cana: “He manifested his glory and his disciples believed in him” (2:11). It is worth noting that this sign is called the beginning (arché) of signs. Therefore, the foundation of all Jesus’ work is the manifestation of his glory so that we may see and believe in him. This glory, however, is the consequence of his faithfulness to the Father who sustains him until the cross: “What shall I say, Father, save me from this hour? It is precisely for this hour that I have come. Father, glorify your name!” (12,27-28). To see the manifestation of Jesus’ glory in order to participate in it requires us to recognize that the newborn in the manger is the same one who was nailed to the cross. Just as angels sing glory on Christmas night, so in the tomb of the risen one they proclaim the good news that he is no longer there. May the celebration of Christmas renew in each one of us the certainty that the eternal Word has pitched His tent in us, and that this tent, though undone, cannot be destroyed, because it has support, His cross, because the newborn, who reclined in the manger, illuminated the world with His birth, saved the world manifesting His glory nailed to the cross. 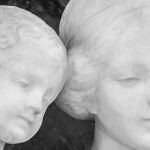 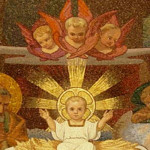