Once again, on this holy night of Christmas, we hear the narrative of the birth of God’s Son in Bethlehem. Perhaps, as we have heard the same story so many times, we may approach it without giving the text the proper attention. Nevertheless, by writing the Gospel, Luke does not simply intend to give an account of a past event, but he invites the reader to make a true way of encounter with the Lord, who comes to us in his Word and in the Eucharist.

First of all, this extraordinary event is situated in history: “In those days a decree went out from Caesar Augustus…” Human history with all its fluctuations is where God reveals himself and acts. In fact, history is the place where the power of God’s creative Word can be grasped. Mary and Joseph, grounded in history, became God’s instruments in his plan of salvation. The journey which the emperor forced them to take (from Galilee to Judea), later will be assumed by God’s Son as the itinerary of his mission. It is in Nazareth where the proclamation of the Gospel began, and in Jerusalem, Judea, where its culmination took place with Jesus’ death and resurrection. This is the path to understand the Word as a manifestation of God’s will.

Certainly, the emperor’s decree was not good news to the people, because it was another instrument of domination over the people subjected to the Roman Empire. It was meant to guarantee more control over their possessions through the payment of heavy tributes. Through what appeared to be just an obedience to the emperor’s decree, Mary and Joseph consolidated their obedience to God, with whom nothing is impossible. Despite history’s conditionings, which often affect our recognition of God’s action, nothing can hinder the fulfilment of his will: “While they were there, the time came for her to deliver her child. And she gave birth to her firstborn son.” Jesus, a descendant of David, was born in Bethlehem, as a sign that all messianic expectations would be accomplished. He is the true son of David, the Good Shepherd of the people of Israel. In Jesus, two characteristics of a shepherd are fully realized: to protect and to feed the sheep.

Mary, the prophetess of the New Testament par excellence, by giving birth to her firstborn child, the King-Shepherd, does two gestures which represent the first proclamation, the concrete proto-gospel of her Son. “She wrapped him in swaddling clothes, and laid him in a manger.” According to the insight of the great Patristic masters (i.e. Origen), the child wrapped in swaddling clothes is the eternal Word of the Father which was wrapped in the Scriptures of the Old Testament (rolls). But now, after taking on our human flesh, he is fully revealed. By being placed in a manger, this King-Shepherd feeds his sheep with his own life.

Mary’s gestures are more than simple care for her baby. They are a true prophecy. They are the Gospel itself bringing joy to all the people: “I am bringing you good news (in Greek: euangelidzomai, ‘I evangelize’) of great joy for all the people”.

Prior to the joyous announcement of the Angel of the Lord, we see the mother’s care for her baby, the first gestures of Mary towards her newborn Son. Therefore, at the root of the Good News there is the service of life, just like the mother has done for her Son. According to Luke’s Gospel, all Christ’s mission is the fulfillment of what Mary did on that Christmas night. The two inseparable realities to encounter and to recognize the Saviour (Word and Eucharist) are given by the angels to the shepherds as signs: “This will be a sign for you: you will find a child wrapped in swaddling clothes and lying in a manger.” It is true that the mother announces her Son as the Word which was wrapped in the Scriptures of the Old Testament, but only the Son has the power to fully reveal this Word, so that his disciples may understand what the Scriptures communicate (Lk 24:27-32).

Certainly, as the mother lays her Son on a manger, she also prophesizes that He is the food. However, only Christ fulfills this Christmas announcement by giving up his body and blood in the Paschal mystery. The mother who wrapped her first-born in swaddling clothes, thus proclaiming a prophecy, will later witness to the fulfillment of this prophecy when, after being taken down from the cross, Christ is wrapped in the shroud (Lk 24:53). The mother who lays him down on the manger, right after He comes out of her womb, will later see him placed in the womb of the earth. Mary is the prophetess in the fullest sense, for she does not only prophesize but also witnesses to the fulfilment of what has been prophesized.

To celebrate Christmas is acknowledge that no human decree imposing a burden of slavery can be stronger than the Good News: “A Saviour is born to you.” Christmas must renew in us the assurance that we can overcome the fear of so many situations of death, injustice, and sin. For the announcement of the heavenly messengers must continue to resonate: “Do not be afraid.”  Moreover, Christmas is a time for us to leave our comfort zone and go to Bethlehem, where we realize that we are not alone. There we encounter the newborn child, tender and fragile. We are revigorated insofar as we listen to his Word and are nourished with his Body and Blood, so that we may sing tonight: “Glory to God in the highest heaven”, and build already on earth God’s plan of love and fraternity: “Shalom on earth among those whom He favours!”. 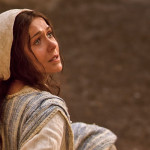 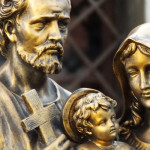