Good news may be welcome, nowadays, but few people expect it.  We live in a time of endemic violence.  From the latest killing in a secondary school, to the latest atrocity in any land on this earth, one can hear the story and wonder: even if people know Christmas has come, what real difference does it make?  As a famous detective said in an English novel, murder is as likely an event on this Feast as at any other time.  Only the sentimental think otherwise.  Violence can explode from pent up rage, or sheer irritability.  Why not?  Hate is practical.  You can wish someone dead during Midnight Mass—or even pull out a gun and start shooting.

No wonder skepticism is easier than faith.  Can anyone be surprised when people insist that peace and justice will never come without the use of lethal force at any time, or anywhere?

Once again, the word of the Lord is an amazing, subversive proposition.  For when Isaiah says a great light has shattered our darkness; when he calls the newborn child “the prince of peace,” whose vast dominion is a new, unheard of creation, his shows us the dawning of the grace that confounds the despair and the indifference people take for granted.  So does the Gospel of Luke, which shows us the birth of a Savior, breathing our air, being nurtured as any child would be, but the Messiah, Savior, and Lord who brings unheard of grace.

Consider.  The God of Israel has ways the Assyrian kings never imagined.  God lets Persian armies march to end Babylon’s rule.  Israel survives extinction and comes home to its land where the latter days are unlike the former ones, with a promise that swords can and will be turned into plowshares.  Then Caesar Augustus turns out to be setting in motion the plans of the very same God, who gives no empire, ancient or modern, license to last forever.  Nor will the newborn Child rule on Caesar’s brutal terms.  And since, as our forebears say, “the wood of the manger is the wood of the cross,” a “senseless” death becomes the source of the only true peace.

Enter Paul the Apostle.  The Son of God has appeared in our midst, he says. Christ came to end the despair his Father never planned, to free us from the death his Father never invented, and to rise up against the violent reign of malice and cold indifference that our world takes for granted.  The long nightmare of sin is over.  And there is far more to the peace of Christ than people think.  For he became what we are that we might become what he is.  And that has consequences even now.  For Christ did not just come and go in a bygone age.  He comes to us tonight in the word of the Lord.  He comes to us tonight in the Eucharist.  Then we become what we receive.  In the birth of Christ, our Messiah and risen Lord, a new order has dawned.

It is easy to dismiss the Church’s faith as absurd, naturally, until we grow still and take it to heart.  Jesus is God’s non-violent reign in person.  And since his appearance trains us to reject heartless indifference, to abandon complicity in brutal injustice, it also trains us to become credible images of Him, who became flesh for our salvation.  We say “Amen” to him and his training in steadfast love when we receive him in Communion.  We say Amen” to Him who is the Kingdom of his Father in the heart of the world. 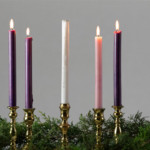 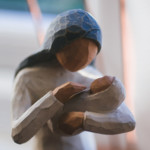