Christ is baptized.  Today, as we move from one season to another, we participate in an amazing mystery.  Remember, Paul says: “because of … [God’s] rich mercy,” we have been saved from the bitter way of death, and shown how to walk the grace-filled way of love and mercy in the heart of the world.

Yet, once again, people may just wonder why they should put their faith in “the Gospel of God.”  To use an idiom, “the facts on the ground” seldom, if ever, change.  If a man sees or contacts a good looking woman, or vice-versa, they see a thing to be manipulated and used.  And if called on the deed, they can always refuse to apologize and ask if the victims should have known the risk when they stepped onto the street.  Such talk is, of course, cold indifference in action.  And, nowadays, the talk tends to get worse.  If speakers get heckled, for instance, they can tell their followers to confiscate the heckler’s coat, and throw the person out into the cold.  And if called on their brutal, heartless indifference, they can ignore the protest and stir their supporters up to do more of the same.  Who knows?  They can even go on to say you have to shoot first because the enemies you want dead will rise up some day and get even with interest.  Or train the next generation to keep the hate alive.  Thus all the world grows cold and dead.  And who cares?  Besides, those who cannot stand their ground and shoot to kill take comfort from the fantasy of horrific violence.  It’s survival of the fittest in a dangerous world, after all.  And that is the only vision worth having.

Our experience means that we encounter surprising grace today.  We were not and are not baptized for nothing, the Apostle says.  “If anyone is in Christ, there is [in fact] a new creation”; there is in fact a “rebirth”, and a “renewal by the holy Spirit.”  Thanks to the mercy of God, we are delivered not only from “lawlessness,” but the cold, brutal, heartless indifference cynical demagogues and autocrats invite us to believe in all over the world.  Nor is our salvation a fairy tale.  In and through Jesus Christ God has done what we slaves of Death and Despair cannot.  God has brought us into the way of love where no woman has to fear being used, where no one has to fear being left to die in the cold, where no people have to fear being laughed at as others beat them bloody.  For “the grace of God has appeared,” Paul says.  In and through the Spirit given us in our baptism, after all, God’s steadfast love and mercy have been poured into our hearts.  “[That] … is our faith.  [That] is the faith of the Church.”

All of this is meant to be clear at the River Jordan.  As people come forward to be baptized, they meet a man, a stranger they do not recognize, perhaps.  But, in fact, God will call the stranger “beloved Son.”  And, when the Son is plunged beneath the waters, he consecrates the water that baptizes us.  In him we are saved from Sin and Death; we are God’s sons and daughters; we are members of his body, which is the Church.  The Lord sets us free from the bitter way of brutal indifference and brings us into the way of God’s mercy and compassion.

During these past few weeks we have considered what the famous English writer, Charles Dickens, called keeping Christmas in one’s heart.  Today, as we make the transition into Ordinary Time, the Lord’s baptism shows us what that looks like from day to day: making “the thoughts of … [Christ’s] heart” our own; willing our enemies’ good—and working for it; walking away from cold, indifferent, violent cynicism and injustice—from “practical atheism,” to borrow a phrase.  Our faith and our baptism have consequences. 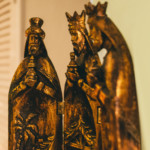