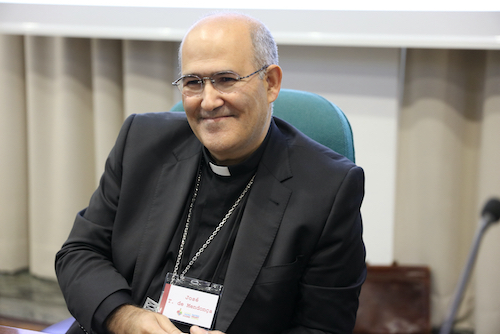 It was a busy day, both for the number of speakers who shared their thoughts with the assembly, and for the contents and variety of perspectives presented. The first part of the morning was dedicated to the theme of trans-cultural transformations and dimensions of devotion to the Heart of Jesus. Daniel Sidler -University of Basel- presented how this devotion developed between the Baroque era and the Enlightenment, at the end of the 18th century, focusing in particular on the reality of Switzerland. Maria Antonia Herradon Figueroa -the Royal Academy of Bellas Artes of San Fernando (Madrid)- talked about how devotion to the Sacred Heart was used as a tool in the service of politics and the wounds that such appropriation caused in Spanish society in the twentieth century. Speaking about Sacred Heart Devotion in Spain today means remembering a less positive period of Spanish history.

Paul Airiau, from the Institut d’Études Politiques (Paris) reflected on how Monsignor Maxime Charles, rector of the Basilica of the Sacred Heart, in Paris, promoted a reformulation and renewal of devotion to the Sacred Heart during his mandate (1968-1985). From that moment on, the cult of the Heart of Jesus essentially became a Eucharistic and restorative cult, without, however, excluding the social and political dimension that had characterized previous times.

Fr. Fransiskus Purwanto, from Sanata Dharma University (Yogyakarta) presented the reality of Indonesia, where Sacred Heart Devotion was introduced by missionaries. The cult was rapidly inculturated and today it is also received with sympathy by the Muslim and Javanese community. Sacred Heart Devotion is essentially spiritual devotion, but it also expressed by social involvement in helping the neediest and the poorest of society.

At the end of the morning, we listened to the presentation of Sven Baier and Damian Troxler, from the University of Teacher Education (Lucerna) on memory and teaching of iconographic devotion in the daily life of society.

The symposium continued, after the lunch break, with the intervention of Marcello Neri, from the Europa-Universität (Flensburg) who reflected on the evolution of Sacred Heart Devotion. According to Tommaso da Olera (1563-1631), the Sacred Heart had as its reference the sacred scriptures and there was no representation and image. With Saint Margherita Maria Alacoque (1647-1690), the Sacred Heart Devotion is linked to the sacramental dimension and is represented by a concrete image. It is a devotion in which the ecclesial institution has preponderance. The speaker concluded by presenting some perspectives for renewing the Sacred Heart Devotion today.

The new cardinal D. Tolentino Mendonça spoke about the rediscovery of the place of the heart. According to the Archivist and Librarian of the Holy Roman Church, the place of the heart is the body of the person, therefore a theology of spiritual senses and bodily senses must be valued in promoting devotion to the Heart of Jesus today.

Fr. John van den Hengel scj, from St. Paul University (Ottawa) spoke about how Father Dehon lived his devotion to the Sacred Heart and Fr. Nicolas Steeves sj, of the Pontifical Gregorian University (Rome) argued that the Sacred Heart of Jesus is a fundamental stimulus for reflection and theological imagination. 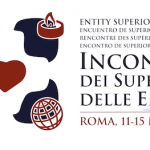