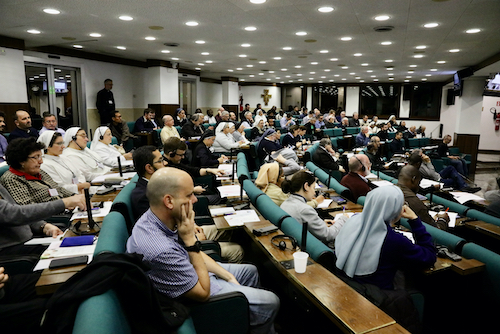 The international Conference titled “Sacred Heart Devotion: Memory – Body – Image – Text; Continuity and Discontinuity”, began this afternoon in Rome at the Hotel Villa Aurelia, sponsored by the Congregation of the Priests of the Sacred Heart of Jesus and the University of Lucerne (Switzerland).

The 120 participants include Dehonian confreres from all over the world, lay people, members of religious congregations dedicated to the Heart of Jesus, and scholars.

Fr. Stefan Tertuente, director of the Centro Studi Dehoniani, opened the conference. After, five speakers shared their research with the assembly in the light of the themes “Memory, Body and Emotion; Devotion – Transformations and Trans-Cultural dimensions”.

Franziska Metzger, a professor at the University of Teacher Education in Lucerne, spoke about Memory of the Sacred Heart; the Linguistic, Iconographic and Ritual Dimension. According to this researcher, ritual images, such as those of the Heart of Jesus, are a space of memory.

Elke Pahud de Mortanges of the Albert-Ludwigs-University of Friborg, spoke of the Heart of Jesus as body and incarnation, emphasizing the importance of the body as an essential dimension of Revelation, and the Heart as a place of memory, a physical representation of the Passion.

David Morgan, of Duke University, Durham, spoke about eros and the vision of devotion to the Heart and to Jesus and the importance that St. John Eudes and the Jesuits had in spreading this devotion in the Church.

Fr. Antonio Viola, who works in the Dehonian community of Villazzano – Trent, addressed the importance of iconography as a representation of the Passion and as a means of replacing the pilgrimage to Jerusalem, between the Council of Trent and the apparitions of Paray-le- Monial.

Finally, Stefan Laube of Humboldt University in Berlin, addressed the evolution of the representation of the human heart from the 17th century.

The conference will continue all day tomorrow, November 9th, and can be followed live via streaming from this address: http://sacredheartconference.org/#presentacion