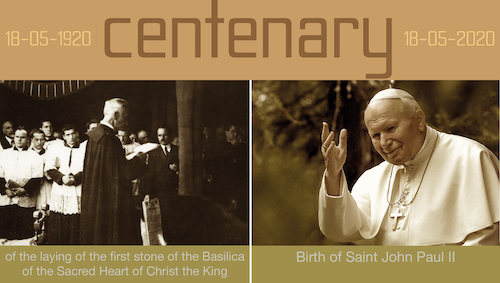 Construction of the Basilica of the Sacred Heart of Christ the King was started in 1924 by the architect Marcello Piacentini. His design was based on the layout of sixteenth-century Roman churches. However, soon after he started, the architect stopped the work and totally redesigned the project by transforming the original plan so that it would be a blend of the Latin cross and the Greek cross. Work on the project resumed in 1931.

Significant characteristics of the church, which was completed in 1934, include a dome and the two bell towers (brick towers). The interior includes significant works such as a bronze bas-relief of the Sacred Heart of Christ the King by Arturo Martini and a Via Crucis by Alfredo Biagini.

The church was established as a parish by Pope Pius Xl on October 31, 1926, with the apostolic letter Regis Pacifici, and then was inaugurated on May 20, 1934.

On February 5, 1965, with the apostolic pronouncement Sacrum Cardinalium Collegium, Pope Paul VI gave it the titular title of the same name.

On July 3 of the same year, Paul VI, with the motu proprio Recentioris architecturae, named it a minor basilica.

In Fr. Dehon’s memoir, we can read what he wrote on this day:

“On May 18 [1920] was the laying and blessing of the first stone by Cardinal Vicar Pompilj. Cardinals Bégin and Ascalesi participated with some bishops and other invited people. It was a memorable day for the work.”

On that day Father Dehon gave this speech:

Our first tribute today is to the Divine Heart of Jesus, we acclaim His kingship over nations, families and hearts.

We offer him our adorations, our thanks and our reparations. We ask him to spread ever more abundant graces on the Church, its ministers, nations and especially the distant missions.

Our tributes then go to the Supreme Pontiff, to our beloved father and venerated Benedict XV, so devoted to the Sacred Heart, who entrusted us with this work because we bear the name of Priests of the Sacred Heart.

Thank you to His Eminence the Cardinal Vicar, who made himself the patron of this foundation.

Thank you to the mayor of the city and to all the civil authorities who have shown such goodwill.

Thank you to the illustrious architect who prepared such a good project.

Thank you to all of you, Monsignors and other dignitaries, who honored this ceremony with your presence.

The Holy Father said that on the day the decree of canonization of Saint Margaret Mary was promulgated, this date must mark the beginning of a new outpouring of the graces of the Sacred Heart and of his kingdom and that Catholics, through their faith and hope, anticipate this as an era of peace, charity and reconciliation between nations and social classes.

This Church must note the memory of this date and testify to our confidence in this blessed kingdom.

And just as the votive temple of Montmartre obtained from God a rapprochement of France to the Church, so this votive temple of Rome will be the signal of this expected reign of the Sacred Heart which Leo XIII wished with all his desires at the beginning of the century and of which our beloved Pope Benedict XV has already glimpsed the realization.

May this place become an abundant source of graces for Rome, for the Church and for the nations.

May God repeat today what he said of the Temple in Jerusalem: ‘My eyes and my heart, my gaze and my mercy will be there every day’

The Divine Heart of Jesus is peace and charity.

Let us, all peoples, all faithful, draw from this mystical source from which Our Lord wants us to open more widely our souls in our troubled and turbulent times.

’Come all to me,’ says Our Lord, ‘the workers, the suffering souls, the tried nations, come to me.’

Here we are, Lord, at your feet, humble, confident and devoted.

Bless us as you have blessed all those who have suffered in Palestine, and bring warm rays of peace, joy and charity down from your Heart.”

On May 18, 1980, Pope John Paul II made a pastoral visit to the Parish of the Sacred Heart of Christ the King and remembered this happy coincidence: he was born on the same day that the foundation stone was laid for the construction of the Basilica of Christ the King.

Here are the words from his homily:

“And today also reminds me of my birthday, which occurred sixty years ago, in Poland, on the same day, May 18, that the first stone of this church was placed, where we are now gathered together to celebrate the solemnity of the Ascension of our Lord Jesus Christ. On this day I remember with particular gratitude my parents: my mother and father; but I also remember my parish (in Wadowice) as the Mother Church which, shortly afterward, welcomed me as a child, born of earthly parents, to the grace of baptism and to the community of the People of God.

I rejoice, dear brothers and sisters, because, by carrying out my service today as Bishop, I can live in union with you, in the spirit of faith, hope and charity, the profound eloquence and mystery of this day, in which the Church remembers, with the Ascension, the eternal glorification of Jesus, seated at the right hand of the Father.”

Basilica of Christ the King

Story of Basilica of Christ the King – 1st part

Story of Basilica of Christ the King –  2nd part