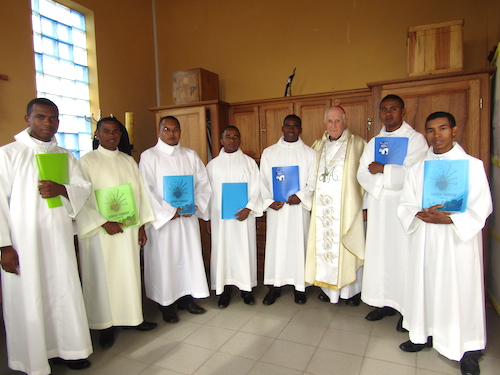 This is a day of grace for the congregation of SCJ in Madagascar and for all the entire church.

It is the celebration of the 176th year of father Leon Dehon, the 150th year of his ordination as a priest, perpetual profession vows on 15th march and consecration of deacons and priesthood on the 16th march.

Each 14th march, the congregation of the sacred heart of Jesus priest all over the world celebrate the birth date of Father P Dehon. Each country and each province have its own way of celebrating the event. However, this year, the congregation in Madagascar celebrated it in a special way towards a perpetual profession pronounced by seven brothers which was carried out on the 15th march. Frs Jean Edmond, Jean de Dieu, Etienne, Jean Robert, Jean Bruno, Jean Emmanuel, Ferdinand. Monsignor Donald Pelletier, the emeritus bishop, was leading the holy mass with the presence of the priests and religious of the congregation and other priests and religious out of the congregation as well as respective families and Christians who attended to pray together. This perpetual profession took place in the chapel St Jean XXIII Ambolokandrina Antananarivo. They have choosing for their motto: “you are the light of the world”. If the life of those who dedicated their life is not similar to the candle’s light that slowly lit off it will not become the light of the world, said the Bishop. 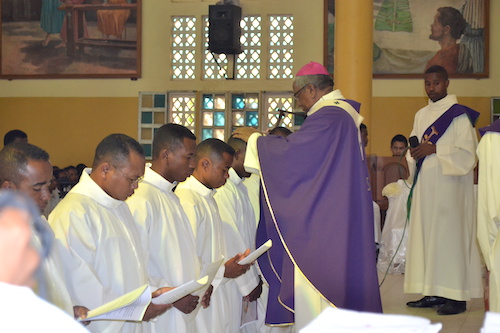 The next day, on Saturday the 16th march, these seven brothers are ordained as deacons. And the ordination of four priests took place the same day. Deacons Herve Paul, Andosoa, Denis Marco and Mahenintsoa. Monsignor Odon Marie Arsene leads the Holy Mass of this ordination. The whole event happened in the parish Notre dame de Fatima in Ambohimirary Antananarivo. The only word addressed to those who are ordinated was to testify Christ in a reliable way. He said last, people are happy that you are going to receive the sacrament of order. However, when you live among them you will experience something different therefore do not be surprised as you will need to prepare yourself for that, here everybody will cry out hosanna hosanna! but out there, it will be different. 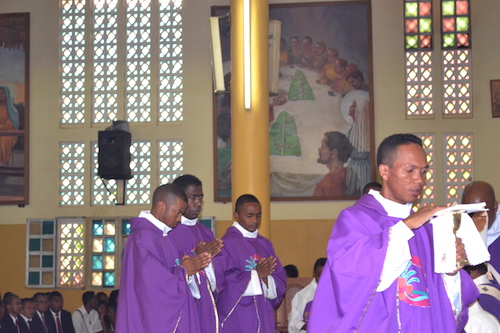 The message from the Superior General of the congregation for us on march 14th 2019 is also related to the holiness attitude it warns not to spend time only on the usual works and responsibilities but live better the main call that makes religious a religious.

Priests aren’t never enough for the catholic churches and for the congregation even with the eleven brothers who receive the sacrament of order. So, we ask prayers and assistance from all that we can obtain a response of call to be priest and religious according to the Lord will. the Lord needs priest, religious and convinced Christians to make the heart of Jesus reign in world.