Notes from the Regional Council 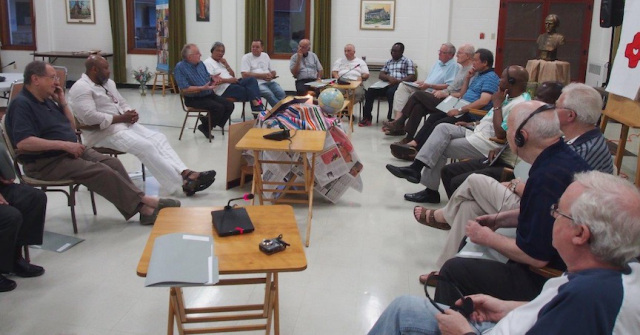 Programmatic Letter of the General Administration

On January 6 the new general administration published its programmatic letter of the next six years, entitled Mercy – In the Footsteps of God. The programmatic letter not only set the action program of the General Administration but also involved the activities of the Provinces, Regions and Districts. Within the letter there was a request of the General Administration to indicate how the entities could begin to put into practice some of the three areas indicated in the letter: (1) Marks of mercy in formation; (2) Marks of mercy with the poor; and (3) Marks of mercy in evangelization.

With regard to the marks of mercy in formation, although we are not directly involved in formation we have given much effort to formation in internationality and interculturality by inviting students (if not scholastics) to come to Canada. We have also contributed to the study of Dehonian topics in collaboration with the Centro Studi in Rome.

With regard to the marks of mercy with the poor, the council members pointed out our desire to set up not a three-year plan but a ten-year plan. Up to this point we have given a lot of attention to immigration and the care of the refugees. With the US province we have set up an immigration commission and all our communities have committed their members to participate in a refugee project. At St. Thomas More parish in Toronto a meeting has been organized to inform people about Islam in order to allow them to overcome their prejudices. Also the parish is interested in sponsoring a refugee family, as is the Ottawa community and the Montreal community. The Region will need to reflect on this project and to integrate it in their community project for social apostolate. The Region has also sought to achieve – not always with equal success – to arrive at financial transparency.

At the level of mercy in evangelization we have participated in mutual assistance to other entities who have greater financial needs. On this point we have asked the Finance Committee to look into our participation in the General Aid Fund and in the 1% project of the Congregation. It was suggested that we create a pamphlet for our benefactors regarding our pump action in Cameroon and other aid projects. We will also be looking into the development of Dehonian spirituality with lay people. Also here St. Thomas More parish is interested in establishing a lay dehonian group, seeking the help of David Schimmel from the United States. At the continental level there will be offered a Dehonian retreat for the US Province and the Canadian Region in 2017. A committee consisting of Byron Haaland and James Schoeder of the US province and John van den Hengel will be working on such a retreat this year. The small committee, perhaps with David Schimmel and Charles Brown, will be meeting in Hales Corners in the beginning of May to prepare such a retreat.

At the Assembly in August it was decided to discuss a ten-year plan for the Region. Although the congregation asks for a three-year plan, a ten-year plan will allow us to do a more long-term assessment of the needs of the Region. A long-term plan allows us to determine much more efficiently what the Region will need to do in the next years especially in face of the aging of the Canadian confreres. The reflection ought to entail:

After the last meeting in Montréal, there have been a number of developments in the community. Here are some of the details:

Since the meeting of February 1 was held in Toronto, it included a meeting from 4 p.m. to 5:30 with the local community. The whole community, except for Fr. Yuliwan, was present. Here are some of the topics discussed:

The next meeting of Council will be in Ottawa on March 30.

The Major Superiors of Europe meet in Clairefontaine

visitation of the RSA Province

visitation of the RSA Province

The Major Superiors of Europe meet in Clairefontaine