Events » Republic of the Congo

After the Provincial Assembly which dealt with the programmatic letter of the new administration, Father Floribert Bulu, Provincial Secretary, looks back on the moments of this great provincial meeting.

As is customary in the congregation, each year every entity organizes to gather members to discuss or debate certain issues of the entity. It is in this perspective that our meeting in the month of March 2022 took place.

Provincial Assembly started with a retreat. Thus, from March 17 to 19, 2022, sixty-one (61) confreres of the Province of the DRC gathered at the Centre Mgr Grison of Kisangani for the meeting. Fr. Charles Koudjou, General Councillor in charge of Africa and Francophone Europe was present.The retreat focused on our Rule of Life. It was preached by Reverend Father Clément Mahindo, on the theme: “The Rule of Life, the book of life”.

As for the Provincial Assembly was held from March 21 to 24, 2022 and dealt with the programmatic letter. In fact, it is since September 29, 2021 that the new administration is in function. Thus, Father Albert Lingwengwe  and His Council, had been willing to provide themselves with a working instrument that is a program document of this provincial administration, which will go until 2024. It is thus during Assembly said that, this document was presented to all the members of the Province to take cognizance of it and if it were necessary, each one brings his stone of construction to it.

During four days, the four pillars that constitute the letter, namely: economy, community, fraternal life, formation and social works, were the object of reflection . For each pillar, the confreres should answer the following three questions,

We cannot fail to underline here the different contributions and very rich reflections of Father Charles Koudjou . To him and to the Superior General represented by him, we present our gratitude for this presence which reassured us of the fraternal communion and the proximity of the General Administration, or in a Dehonian language, of Sint Unum.

On the last day of our meeting, the closing mass was celebrated at 5:30 pm by Archbishop Marcel Utembi Tapa of the Archdiocese of Kisangani. In his closing remarks, he did not fail to thank the Priests of the Sacred Heart of Jesus, who are the grandparents of the evangelization of the Archdiocese of Kisangani. By this occasion, he had also meant that the archdiocese and the SCJ are linked by destiny and that the two should hold hand in hand to continue the evangelizing work started by Bishop Gabriel Grison, whose tomb is located at the very place where he started this mission. Having recalled this, Bishop Marcel Utembi had finally asked the Priests of the Sacred Heart of Jesus, to take over the parish of Mokaria, which remained for several years without the presence of priests. We can point out that this parish is one of the oldest missions of the DRC Province.

After these meetings of the Provincial Assembly, on March 25, 2022, four Scholastics were ordained deacons. They are the deacons: D. Félicien Ngampwo; D. Jean-Louis Andoo; D. Victor Mukpekpe, and D. Pacôme Yamoni. With the ordinations of these deacons, the DRC Province now has ten (10) deacons.
We give thanks to God for all the marvels He never ceases to accomplish for our Province and through it, for the entire Congregation. 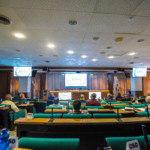 More on the General Conference...

This year, the Dehonians in Congo celebrate 125 years of presence.

Reflecting on the Future With Hope

The Dehonians of the Congo Province held their provincial assembly from February 17 to 20.

More on the General Conference...