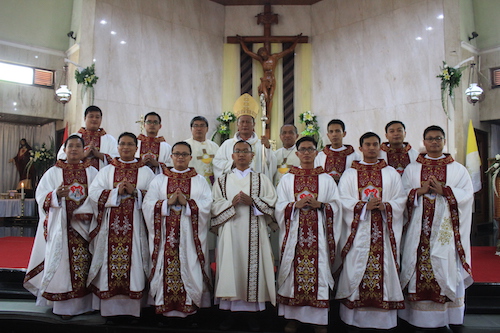 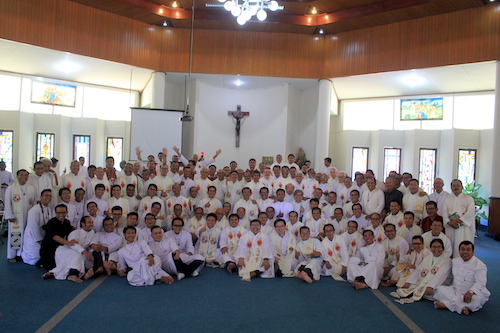 During the Eucharist the bishop quoted from Pope Francis’ letter to religious titled “Rejoice”. In his homily, the bishop invited the faithful to “not be afraid to live a holy life and proclaim joy through daily life”. This echoed the motto embraced by the new priests: “servite domino in laetitia” (serving God joyfully).

In his remarks, Father Antonius Edi Prasetyo, SCJ, said, “Our lives are like five loaves and two fish symbolized as offerings from a simple family; they grow in the Catholic faith and then are taken, blessed and broken by God to be a blessing and joy for many people”.

The following day, SCJs gathered together in assembly; it opened with the adoration of the Blessed Sacrament. Meeting at the Laverna Retreat House in Lampung, the assembly was an opportunity to share in fraternal friendship, and also to update members of the province on various topics and concerns. Items discussed included personnel issues, pastoral works (especially YPKLD – Leo Dehon Catholic Education Foundation), education, and the Lay Dehonian Family. There was also a presentation by  Father Yulius Sunardi, SCJ, on sexuality and sexual moral violations.  The assembly concluded with a First Mass concelebrated by the ten new priests.