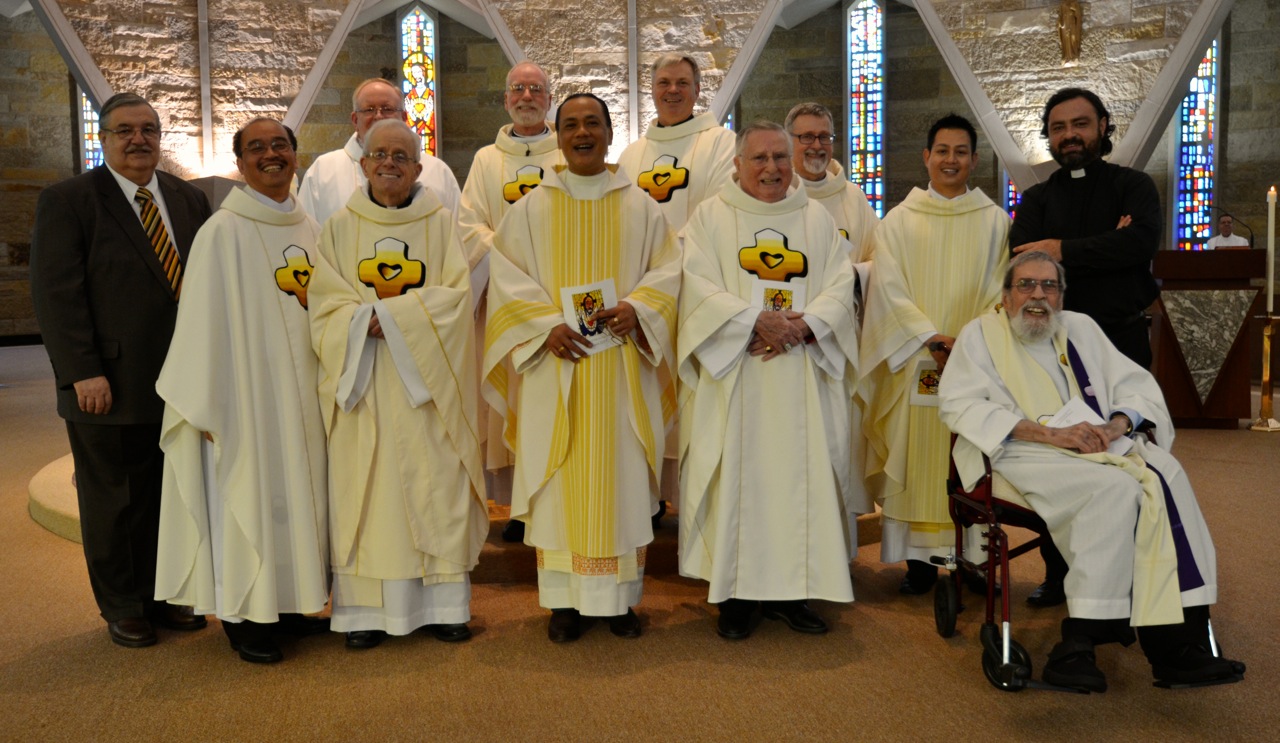 The US Province celebrated the religious jubilees of 11 SCJs on Monday evening, July 6. Fr. Ed Kilianski, SCJ, interim provincial superior, as well as one of the jubilarians, was the main celebrant. Fr. Stephen Huffstetter, SCJ, newly elected general councilor, was the homilist. 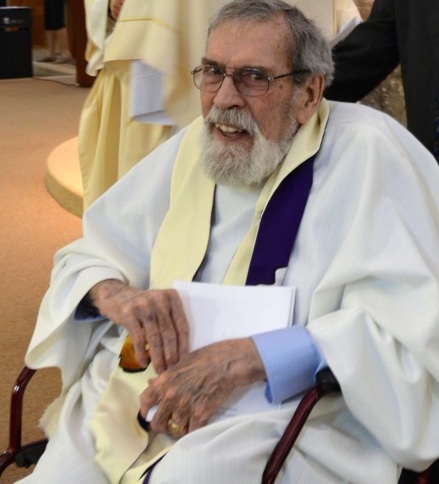 The jubilarians included Fr. Steve Wiese, SCJ, who at 80 is not only the senior jubilarian, but also the longest in vows: 60 years (he is pictured at right). Originally from New Jersey, he did his theology studies at Sacred Heart Monastery and was ordained in 1963. His ministries included seminary education, parochial work (including six years as pastor of Sacred Hearts of Jesus and Mary parish –– now St. Martin of Tours), senior ministry, and two years as a missionary in Lesotho.

He is now a member of the Sacred Heart Community at SHML, with residence at the Congregational Home in suburban Milwaukee.

Br. Francis Snider, SCJ, 68, celebrates his 50th anniversary of vows this year (he is pictured at left). Originally from Zanesville, Ohio, much of Br. Frank’s life has been devoted to education. He taught at Divine Heart Seminary (while also serving as academic dean, business manager and treasurer) and at Immaculate Heart of Mary Seminary before taking a teaching position at Aquinas High School in San Bernardino, Calif. It was the start of a 30-plus year commitment to Catholic high school education. Since 1988 he has been a teacher at Incarnate Word High School in San Antonio.

Three SCJs celebrate their 40th anniversary of vows. They include Fr. Ed Kilianski, 60, pastor of Our Lady of Guadalupe parish in Houston. As noted above, he is also interim provincial superior. He holds the position until the end of August when elections will take place for a new provincial administration following the election of Fr. Stephen Huffstetter to the General Council.

Ordained in 1983, Fr. Ed is originally from Buffalo, NY, and has served as province vocation director and in parish ministry. A member of the Provincial Council, he was vice provincial under Fr. Steve, and served as a delegate to this year’s General Chapter in Rome. Fluent in Spanish, he has had a long-time commitment to Hispanic ministry.

Fr. Gary Lantz, SCJ, 79, is originally from Decatur, Il.(he is pictured with his brother at right) He was professed in 1975 and ordained in 1980. His assignments have included parish ministry in St. Louis and Milwaukee; however, it was in South Dakota where he truly found his call. 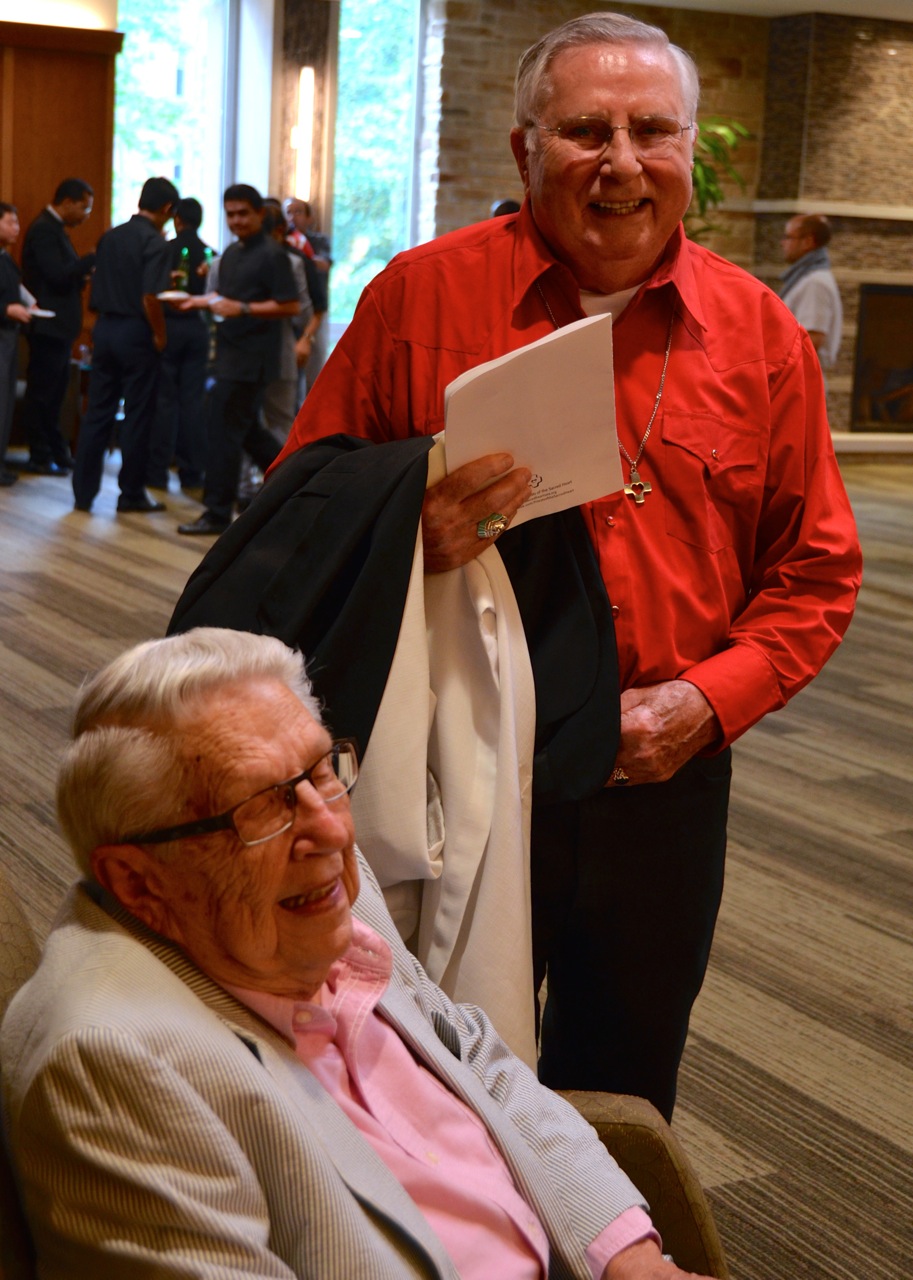 He served in parochial ministry with the Lower Brule – Crow Creek Pastoral Team, as well as at parishes throughout South Dakota. He also ministered at St. Joseph’s Indian School in Chamberlain, and for many years as a chaplain at the South Dakota Women’s Prison in Pierre. In 2005 he was honored by the South Dakota Department of Corrections for his work. Retired, he now lives in Chamberlain.

Fr. Robert Tucker, SCJ, 63, is the third 40-year jubilarian. A Detroit native, he was ordained in 1982. A member of the pastoral team that serves much of northern Mississippi through Sacred Heart Southern Missions, Fr. Bob continues in the ministry to which he has devoted his life: parochial ministry.

His first assignment was at St. Cecilia parish in San Antonio in 1982. From there he went to his hometown of Detroit, serving at his childhood parish of St. Rose of Lima. He also ministered in Milwaukee and in Houston at St. Elizabeth Ann Seton and St Matthew parishes.

Fr. Zbigniew (“Ziggy”) Morawiec, SCJ, celebrated his 25th anniversary of priesthood in his home province of Poland before being honored for his 30th jubilee of vows in his adopted US Province. Ordained in 1990, Fr. Ziggy, 50, taught dogmatic theology in Poland at SCJ schools in Stadniki, Cracow and Sandomierz before going to India to serve in formation.

Fluent in Spanish, for the past four years Fr. Ziggy has been associate pastor of Our Lady of Guadalupe in Houston. He is pictured at left.

Fr. Christianus Hendrik, SCJ, a 25-year jubilarian, is originally from the Indonesian Province. Ordained in 1998, he served in parish ministry and as director of a retreat house in Indonesia before taking a missionary assignment in West Papua. Malaria cut that assignment short.

In 2009 he came to the United States to learn English in preparation for ministry in the Philippines but soon into his studies he was asked to consider a different missionary assignment: South Dakota. He has been a member of the Lower Brule Pastoral Team for the past five years and since 2013, a member of the Provincial Council of the US Province. He is 45.

Fr. Joseph, 45, is a Vietnamese immigrant who currently serves as associate pastor at St. Martin of Tours parish in Franklin. He has previously ministered at Our Lady of Guadalupe parish in Houston, and on the Provincial Council. He was ordained to the priesthood in 2002.

In 2013 he successfully defended his thesis: “Bridging the Gap for Future Generations: Developing a Plan for Ministry to Vietnamese-American Families Living in Bi-Cultural Communities” to earn a Doctorate in Ministry from the Houston Graduate School of Theology. 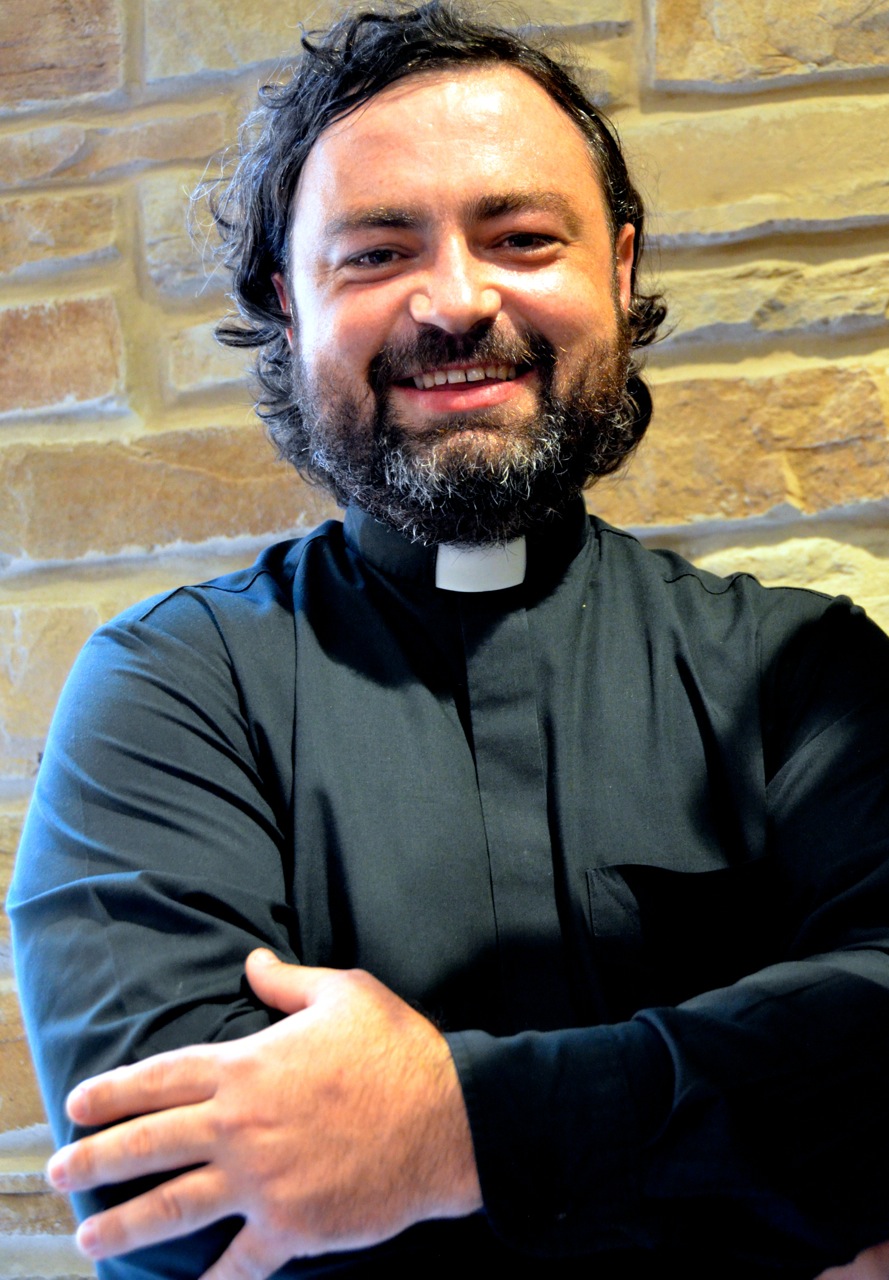 Br. Andy, 40, is a native of Poland. In 2004 he earned a master’s degree in education, specializing in social pedagogy. In doing so, he was following the example of an uncle who was a school administrator. “I saw him as a man who was doing his vocation,” said Br. Andy. “He was a good model. A witness to living one’s vocation.”

However, it wasn’t education that Br. Andy went into, but publishing. He became director of the printing department of the Polish Province’s publishing house in Krakow. In 2008, his ministry turned in a new direction: the missions. He did a five-year assignment in Uruguay before coming to the US Province in 2013 for ESL. As is Fr. Ed Kilianski and Fr. Ziggy, Br. Andy is now on the pastoral team of OLG, Houston. He is pictured at right.

Fr. Quang, 50, is vocation director for the US Province. Originally from Vietnam, he was ordained in 2000 and served in parish ministry at St. Elizabeth Seton parish in Houston before enrolling at Fordham University in New York, where he earned a master’s in economics. In 2013 he was awarded his Ph.D. in Economics/Political Science from Claremont Graduate University in California.  The title of his dissertation was “Doi Moi (Economic Renovation) Revisited: The positive economic outcome(s) and a negative externality, especially in the service sector of Vietnam.”

Fr. Ed Zemlik, 57, is the last of the four 20-year jubilarians. Ordained in 2001, he has served at St. Matthew parish in Houston and with parishes through Sacred Heart Southern Missions in northern Mississippi. When he was in Mississippi Fr. Ed also served three terms (six years) as diocesan dean on the Presbyteral Council of Jackson.

He is currently the residential director of the ESL program at Sacred Heart Seminary and School of Theology. Fr. Ed earned his bachelor’s degree from Indiana University in Gary, and his M.Div. from Catholic Theological Union in Chicago.

CLICK HERE to view all of the photos from the July 6 jubilee celebration. 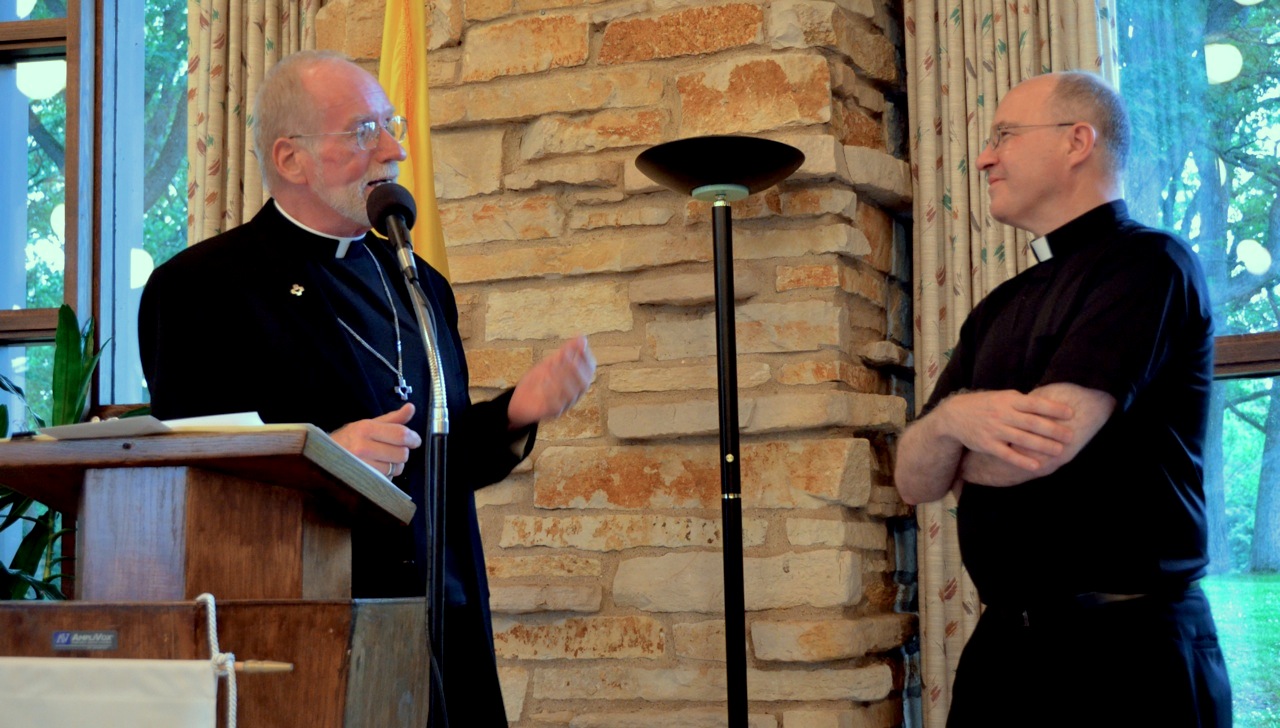 Fr. Ed Kilianski took the opportunity of the jubilee celebration to thank Fr. Stephen Huffstetter for his ministry as provincial superior. Fr. Steve was recently elected to the General Council in Rome.

Fr. Wilmer: I'm moved by the trust of the Dehonians

Fr. Wilmer: I'm moved by the trust of the Dehonians