With the encyclical Fratelli tutti, Francis paid of his debt to the second portion his name he owns from the Poor Man of Assisi, showing that the choice contained a project of life and ministry, far beyond hagiographic sympathies.

On the other hand, finding direct connections between the encyclical Fratelli tutti and the mainstream of Dehonian spirituality can only be derived from an exegetical forcing or in any case from a long declination of subordinate meaning.

It remains true that FT ” has a lot to say to our Dehonian life”, as P. Carlos Luis invites the congregation to meditate on its riches. And it remains even more true that FT is an invitation to awaken and revive in us “the same sentiments of Christ Jesus”, a vocation inscribed at the centre of the spirituality of the Sacred Heart.

Of the “sentiments of Christ Jesus” the encyclical privileges those with a “social” trait summarized in the icon of the Good Samaritan. FT grafts the reading of the parable into the cosmic and theological background of the evil that entered the world out of envy, which he plans to divide and shows his dominance over the world in the fratricidal story of Cain and Abel (cf. 57). It is the rupture of a purely “horizontalist” reading of Francis’ encyclical, to restore theological value to what, in the name of God’s love “poured into our hearts”, is done to “improve politics” (ch. 5 ) and “social friendship” (ch. 6).

It is the fruitful dialectic that we usually read, with the eyes of Dehonian spirituality, in the “reparative vocation that the Spirit arouses in the Church.” In all our work as a congregation and in each individual work, what we witness is the vocation to be “prophets of love and servants of reconciliation.” The ” Sint unum ” is the horizon that includes and exceeds the peace project.

A second dialectic that innervates FT is the prophecy pronounced in front of the “shadows of a closed world” (chap. 1) to arrive at “thinking and generating an open world” (chapter 3).

The chap. 4 (“A heart open to the whole world”) indicates the key to possible conversion, even in the face of the cosmic nature of challenges, in the maturation of “an open heart”.

“Gratuitousness that welcomes” is the gift received and given that, as in the parable of the Good Samaritan, it declines towards the individual (“the local flavour”) against the background of a “universal horizon”.

The Heart open to the world is the Heart of Christ opened by the transfusion of His side on the cross. Our heart open to the world is participation (even historical) in that Heart; it is the incarnation (even singular) of that universal Heart. So as not to let any historical declination, as the many suggested by Francis, be only “social doctrine” and instead propose themselves as theological attitude, discourse on man and discourse on God (theo-logy).

The posture of the Good Samaritan who bends over the “stranger” fallen into the hands of thieves is the posture assumed by God in Christ when he “humbled himself by becoming obedient” to the gift of life.

It is the DNA that is imprinted in our posture – of body and spirit – when we bend over each man, “bent in body or spirit”, to carry him on our shoulders and take care of him, not with a singularly heroic gesture, but in the community of the church.

I dare to say that the FT evokes the spirituality of the Sacred Heart more by emptiness than by fullness. More in what he does not say (invoking his need) than in what he says. More in the implicit premises (the open Heart of God) than in the explicit declensions (the open heart to the whole world).

From then on, the entire encyclical, with its wise “doctrine” bearing, can be imported into our apostolic projects without losing the flavour of the Dehonian vocation. It is the Wisdom of God that “through the ages, passing to holy souls, prepares the friends and prophets of God” … for reconciliation.

As much as I am fascinated, when defining my relationship with Christ and with the daughters and sons of God, by the Johannine vocabulary of friendship (“No one has greater love than this: to lay down his life for his friends”, Jn 15:13) than by the Franciscan vocabulary of the fraternity. 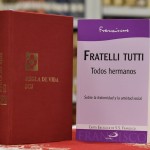 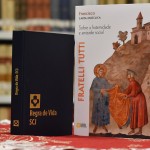 Educare with an open heart and mind

Among the priorities: support for educators and more engagement in the social network.