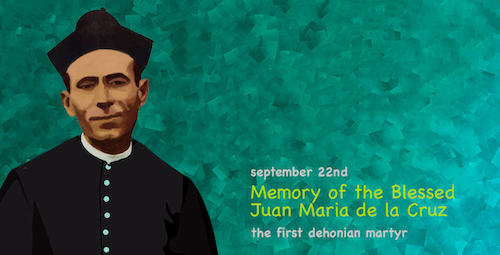 On September 22nd the Church celebrates the memory of Blessed Juan María de la Cruz, a martyr of our Congregation.

Pope Francis, in the Apostolic Exhortation Gaudete et Exsultate, wrote  that “the strength of the testimony of the saints lies in living the Beatitudes and the rule of conduct of the final judgment. They are few words, simple, but practical and valid for everyone, because Christianity is made, above all, to be practiced”. [N. 109]

Convinced of the exemplary witness of the protomartyr of our Congregation, Blessed Juan María of the Cross, we entrust our prayer to the intercession of the Blessed, because he is: Supporter and protector of Vocations, Apostle of the Sacred Heart of Jesus, Martyr of Christ.

Mariano García Méndez was born in San Esteban de los Patos (Ávila, Spain) on September 25, 1891, from a simple peasant family, rich in Christian virtues. Even as a child he felt the call to follow Christ as a priest and would become a diocesan pastor. Having entered the Priests of the Sacred Heart of Jesus, he took “Giovanni María de la Cruz” as his religious name. It was how he would later be known. Filled with apostolic zeal, he dedicated much of his ministry to the Apostolic School of Puente la Reina, and was also a vocational promoter. The Spanish Civil War of 1936 led him to witness his faith and declare his priestly status when a fire was set to the church of St. John in Valencia. Imprisoned, after a month of ministry among his fellow prisoners, he suffered martyrdom in Silla (Valencia) on August 23, 1936.

We present here some aids that can be used to commemorate his memory.

– Comics that tell the life of the Blessed (for the little ones),

– Liturgical materials for the Mass and liturgy of the hours,

– A prayer for the canonization of Blessed John Mary of the Cross.

The gathering of the Asian Dehonian Theological Commission

Remembering the first Dehonian to be named blessed

80th anniversary of the martyrdom of an SCJ (video)

The gathering of the Asian Dehonian Theological Commission