In the first reading, God announces through Jeremiah a new covenant that he will make with His people. If He announces a new covenant, it would mean that the old covenant has expired or failed. If it has failed, is the Lord to blame? A covenant always involves two parties. The one at Sinai was between Yahweh and His people. Yahweh is always faithful. It was His people who did not keep the covenant. They are said to have betrayed the covenant. At Sinai, they made a golden calf to worship when they had pledged to worship Yahweh alone. Over the years, the people have shown the same infidelities despite the calls of the prophets. God announces another covenant. How will this new one be different from the old one? God will write His law in hearts instead of on stones. In other words, He will put His law within one’s reach.

The heart in Africa is the seat of life, the center of all deliberation and any decision that does not come from the heart remains a dead letter. This law that God will inscribe in hearts is the law of love. It is out of love for man that He will make the new covenant with His people. Another difference is the universality of this new covenant. It will not concern a single person. It is through His Son that the covenant will be concluded. The covenant is always concluded by a sacrifice.

Jesus will become the sacrifice to be offered to seal the new covenant not only between the Father and Israel but between the Father and all humanity. It will no longer be the blood of goats, sheep, and chickens (in Africa) that will save us from sin and bring us closer to God, but the blood that Jesus will shed on the cross. He is the grain of wheat that will fall into the ground, even if it dies, it will bear much fruit with its resurrection. As Saint Tertullian said, “the blood of the martyrs is the seed of Christians”. The seed that falls into the ground, even if it dies, will germinate, grow, and bear fruit. It is out of love that Jesus will give His life, not only to save His people, but to save all humanity. Long before His passion and death, He was already sought out by the Greeks, the foreigners who were once excluded from the people of the Old Covenant.

The apostle Paul will say that it is the whole cosmos that is thirsty for salvation, in other words, for the benefits of the new covenant. He writes, “For I believe that the sufferings of the present time are not to be compared with the glory that is to be revealed in us. For the waiting creation longs for the revelation of the sons of God. If it was subjected to vanity – not because it wanted to be, but because of him who subjected it – it was with the hope that it too would be freed from the bondage of corruption to enter into the freedom of the glory of the children of God” (Rom 8:18-21). Christ’s death on the cross and His resurrection will have an impact on the whole universe. As he declares in the gospel: “When I am lifted up from the earth, I will draw all things to myself. By his resurrection, he will recover the glory he left with the Father before taking on the human condition (Phil 2:6-11).

The salvation He brings by this supreme sacrifice has a centrifugal force that makes Him the judge of the whole universe, having the right to fall and to rise again over all beings. It is by this sacrifice that He redeems all humanity from the damnation of sin. “Now that he has attained perfection, he brings final salvation to those who obey him” (Heb 5:9). Following His example, we are invited to obey until the end of the gift of our lives, knowing that the seed that falls into the ground if it dies will always bear fruit.

Lord, it is through Your cross that You will save us. For five weeks You led us into the desert so that we could learn from You how to be faithful servants of the Father. You teach us today that by giving ourselves unreservedly in obedience to the terms of the new covenant You sealed for us on the cross, even to the point of giving our own lives, we can be Your faithful disciples. We pray that You will keep us faithful to Your new law of love. 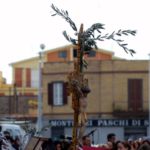