This Sunday, which introduces us to the climax of Lent, has two designations: Palm Sunday and Passion Sunday. It brings together two events in the life of our Lord Jesus separated by a distance of six days, namely, his triumphal entry into Jerusalem and His passion and death. This Sunday also introduces us to Holy Week during which we will relive in spirit the last week of our Lord Jesus in Jerusalem which ends with His death and resurrection. We observe through the Word of God today, the paradoxes.

Paradox of the crowd. The same crowd that acclaims Him at His entry into Jerusalem with all possible reverence, pronounces with vengeance a few days later for His crucifixion and the release of a criminal.

Jesus of divine nature gave up all the divine prerogatives (omnipotence, omniscience…) to be crucified like a vulgar bandit after having suffered all the possible humiliations. Paul will say, we preach a crucified Messiah, a scandal for the Jews, madness for the Gentiles, but for those who believe in Him, He is Wisdom of God.

Peter, very enthusiastic about following his master to prison, denies him and the apostles, whom he called his friends, who all run away when he is arrested to hide.

What would our attitude be if we had been part of it? Surely, the crowd is like us. Sometimes we sing the Lord’s praises at the top of our voices, but soon after we compromise ourselves in acts that do not honor Him. When receiving the sacraments (baptism, confirmation, marriage, reconciliation…) we promise fidelity and like Peter to prefer death rather than to betray the commitment made before him. But how many people who have received the sacraments of initiation still go to church? How many are still willing to defend their Christian faith or mock those who have remained faithful to the Church? What is it that makes us turn away from the paths taken behind the Lord? It is the temptations and difficulties of life. The crowd follows the moods. Whoever wants to go against the flow of the crowd is indexed, marginalized, and even persecuted. The fear of being upset or losing advantages or being persecuted makes us succumb to the temptation of pleasing the crowd or defending our own self-esteem like Pontius Pilate or Peter. The latter tried to follow his master as he had promised and even to defend him in the Garden of Olives. But the physical and verbal violence he suffered at the hands of his master led him to deny knowing him. However, when the cock crows, he remembers what his Master had said to him: “Before the cock crows today, you will have denied me three times”. So, after realizing his betrayal, he went away to weep. When the rooster of our conscience crows to remind us of our betrayals, do we turn back or do we persevere in our sins and stifle it?

Not Everyone ran away from Jesus or was ashamed of his humiliation. The women followed him to the point of expiry, experiencing their powerlessness to stop evil. Sometimes we run away from injustice because we are powerless to stop it. These women show us that we are in the wrong or that we are cowards when we do not defend a just cause to the end.

Lord, do not treat us according to our cowardice, our indifference towards the suffering like You whom we meet on our paths. May the celebration of Your passion trigger the crowing of our consciences to awaken us from the sleep of our weaknesses, so that we mourn them bitterly like Peter and rise with You at Easter more determined to trust in You. 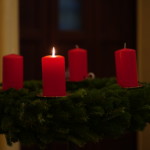