Priestly Ordination and Jubilee of the Provincialization of Cameroon

This Saturday, on February 13, 2021 the Dehonians of Cameroon gathered at the Jean Dehon International Scholasticate in Ngoya for two celebrations: the priestly ordination of Deacon Valéry Ngono SCJ and the opening of the jubilee year of the provincialization of Cameroon.

The Jean Dehon House of Formation in Ngoya is, in the words of Fr. Joseph Kuaté SCJ, historian, “one of the most international houses of the Congregation since its opening”. Even before its construction in 1988, the scholastics who lived in the small André Prévot community in Yaoundé were already an international group coming from Cameroon and Congo. It was intending to bring the community of students closer to the Saint Cyprian Theological School that a scholastic was built at the time on a 4-hectare site not far from the theological school, with the financial support of several Provinces: “In fact, it was the whole Congregation that was sensitive to the need for Cameroon to have a structure for the formation of young people,” Father Siou testified.

Since its inauguration on July 1, 1990, with three scholastics at the beginning (Brothers Engelbert Fotsing, Albert Lingwengwe and Léonard Ghomo), the Jean Dehon International Scholasticate currently trains twenty-one Dehonians of four nationalities. In more than thirty years of existence, Jean Dehon House has formed several Priests of the Sacred Heart from Cameroon, Congo, Angola, Mozambique, India and South Africa. This internationality, so dear to the Dehonians, is a great richness for the scholasticate of Ngoya. For Father Jean Marie Ngombou, formator for several years, it allows not only the openness and interest of the confreres to discover other cultures but also balance at the level of the formation team. However, he takes up some of the challenges facing this international house: the understanding and harmonization of cultural differences; the serious economic challenges that bring with them a deficit in the maintenance of the infrastructures and the automobile fleet: “We have two buses for the transportation of students who have aged, sufficiently aged and there is not even a promise to change or increase them. If we would like to have something more balanced here, I think we should focus on infrastructure, means of transportation for young people, and then improve the training framework even more so that it meets the standard of an international house”. 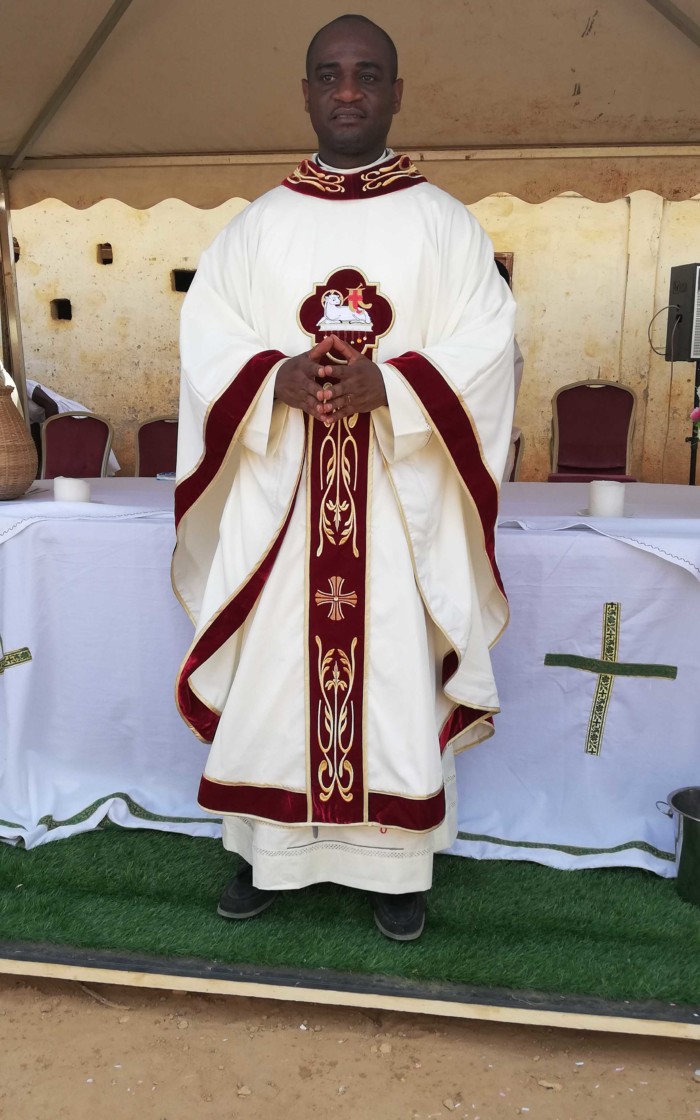 Last Saturday at the International Scholasticate in Ngoya, Cameroon, a new event took place: a priestly ordination. For the first time in its history, Jean Dehon House organized the priestly ordination of a confrere, Father Valery Gilbert Ngono Onana SCJ. According to the rector of the scholasticate, Father Michel Mandey, it was such a success that one would like to organize such events at the scholasticate in the future: “With the experience, we have had, I think that it is something that can become feasible. I could even say, it would be ideal”. However, beyond the organization and the beautiful festivities, Father Valery, the new priest, remained focused on the depth of the sacrament he received: “For me, the priest is in a way a shepherd to whom the Lord gives the charge of his flock; he is a humble servant of Christ. He is a humble servant of Christ. He must exercise his ministry in the image of Christ’s ministry as High Priest and Good Shepherd. He is a humble servant of Christ”. The ordination Mass, which was wonderfully well organized, was presided over by Bishop Sosthène Laopold Bayemi, Bishop of the Diocese of Obala in the Central Region of Cameroon. Besides the great mobilization of all the confreres and the staff of the scholasticate, there was also a strong presence of SCJ confreres from elsewhere, several other priests, religious men and women, without forgetting the family members of the chosen one of the day as well as his friends and acquaintances.

Valery Gilbert made his first profession on August 12, 2012, in Ndoungué. Then followed three years of philosophical studies in Yaounde. After a year of internship in religious life he flew to Brazil where he completed four years of Theology studies in Taubaté, where he was ordained Deacon; and now a priest in his native country.

During this same Eucharistic celebration, the Dehonians of Cameroon also celebrated the solemn opening of the jubilee year of their 25 years of existence as a province. The transition from Region to Province was in Cameroon the fruit of a project that has been maturing over several years. Finally, it was on November 30, 1995, by the declaration of the General Government in Rome that Cameroon became the 22nd Province of the Congregation and the third in Africa after Congo in 1964 and South Africa in 1994. But the celebration of the provincialization proper did not take place until June 13 and 14, 1996, at Nkongsamba, with the inauguration of the new provincial administration consisting of Fathers André Conrath, Provincial Superior, and four councillors: Alphonse Huisken, Antonio Panteghini, François Rietsch and David Tachago. At that time the young province had 38 members: 25 priests, 4 brothers, 6 scholastics and 3 novices. Twenty-five years later, it now has 127 members and 6 novices. It was also to celebrate this silver wedding of the Cameroonian province that several confreres made the trip this weekend to Ngoya, where a cake specially made for the occasion was cut from the hands of the Provincial Superior, Father Jean Marie Signié, accompanied by Bishop Sosthène Bayemi, principal celebrant, Father David Tachago, Vicar Provincial, and the new priest, Father Valery Ngono. 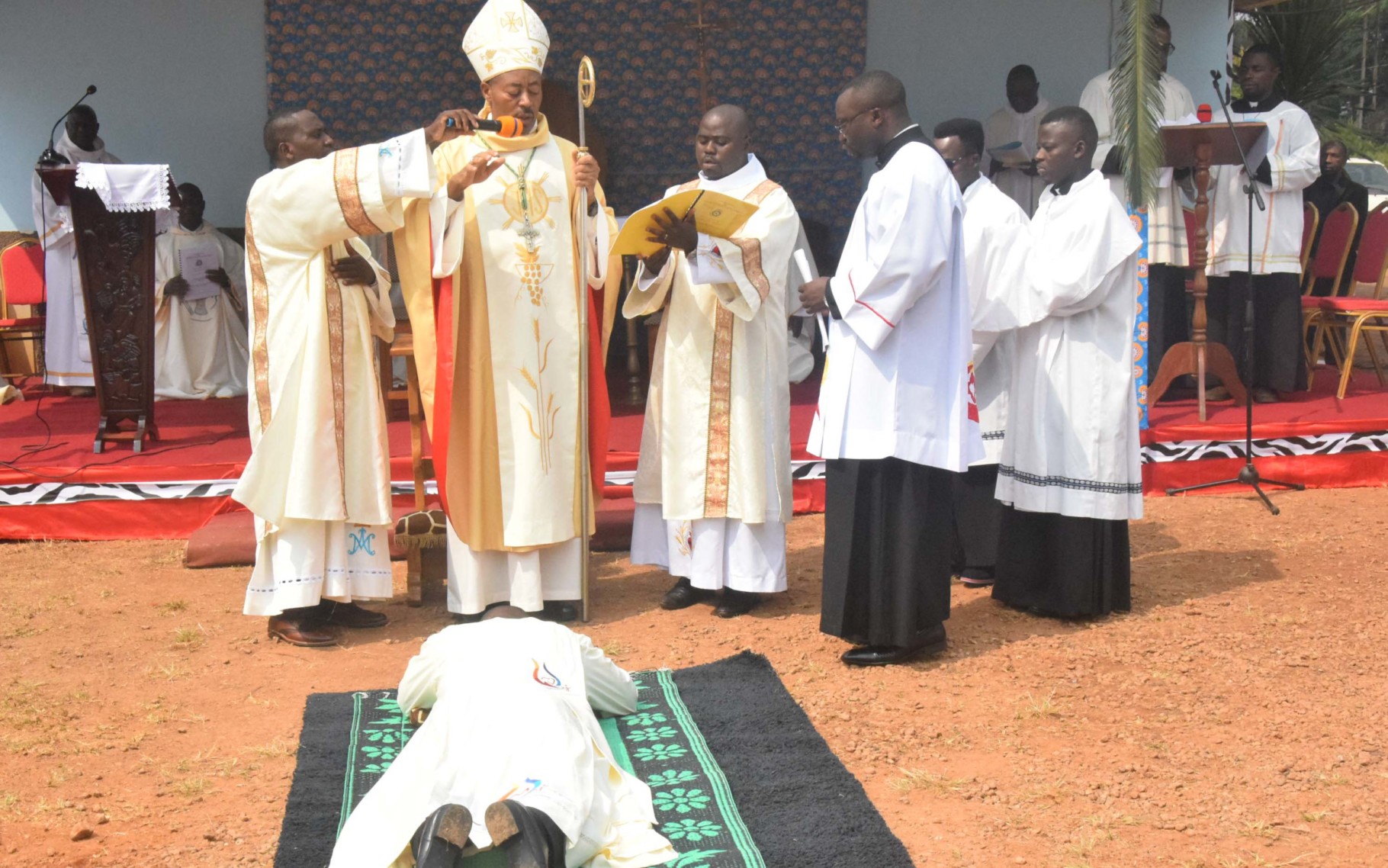 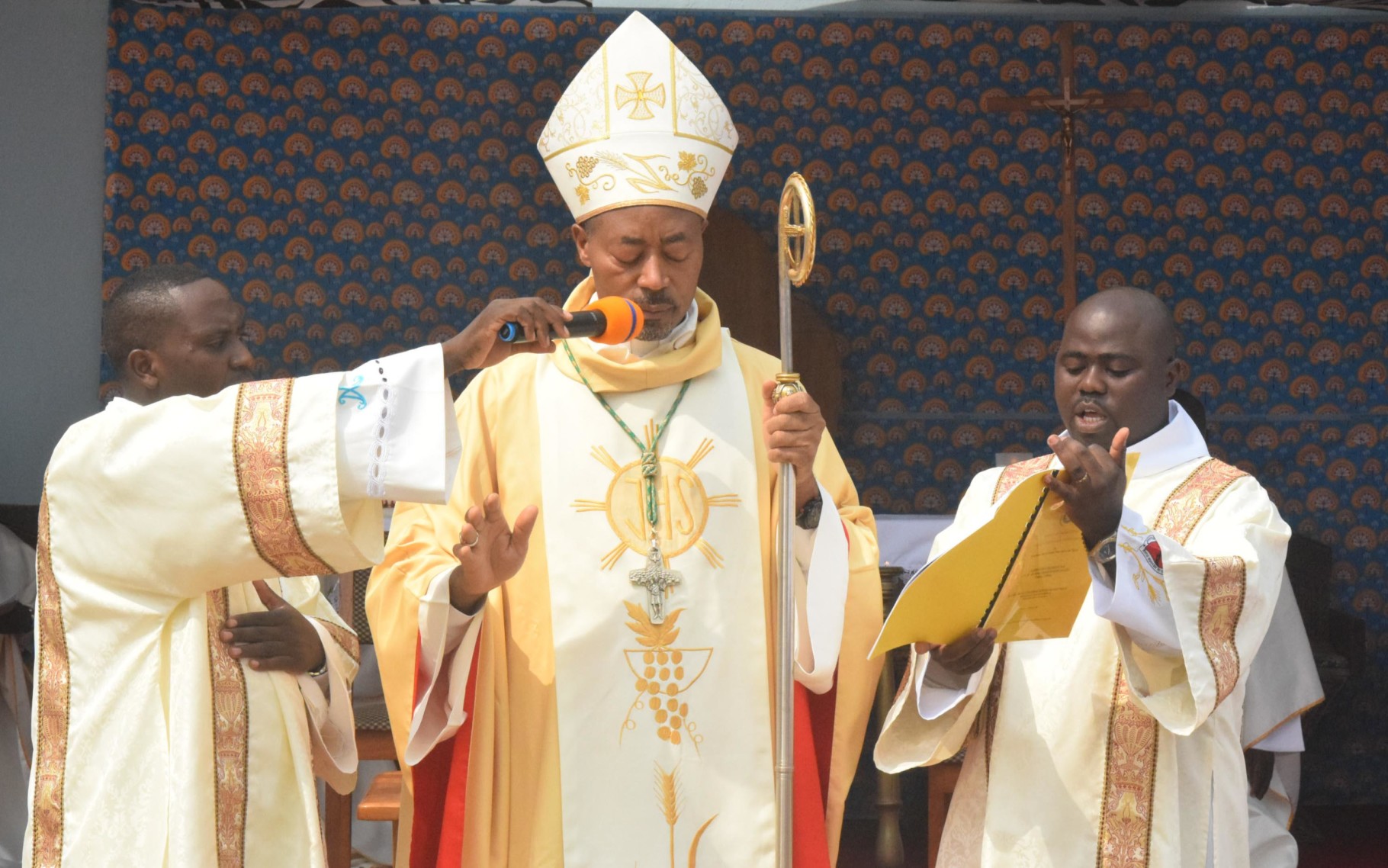 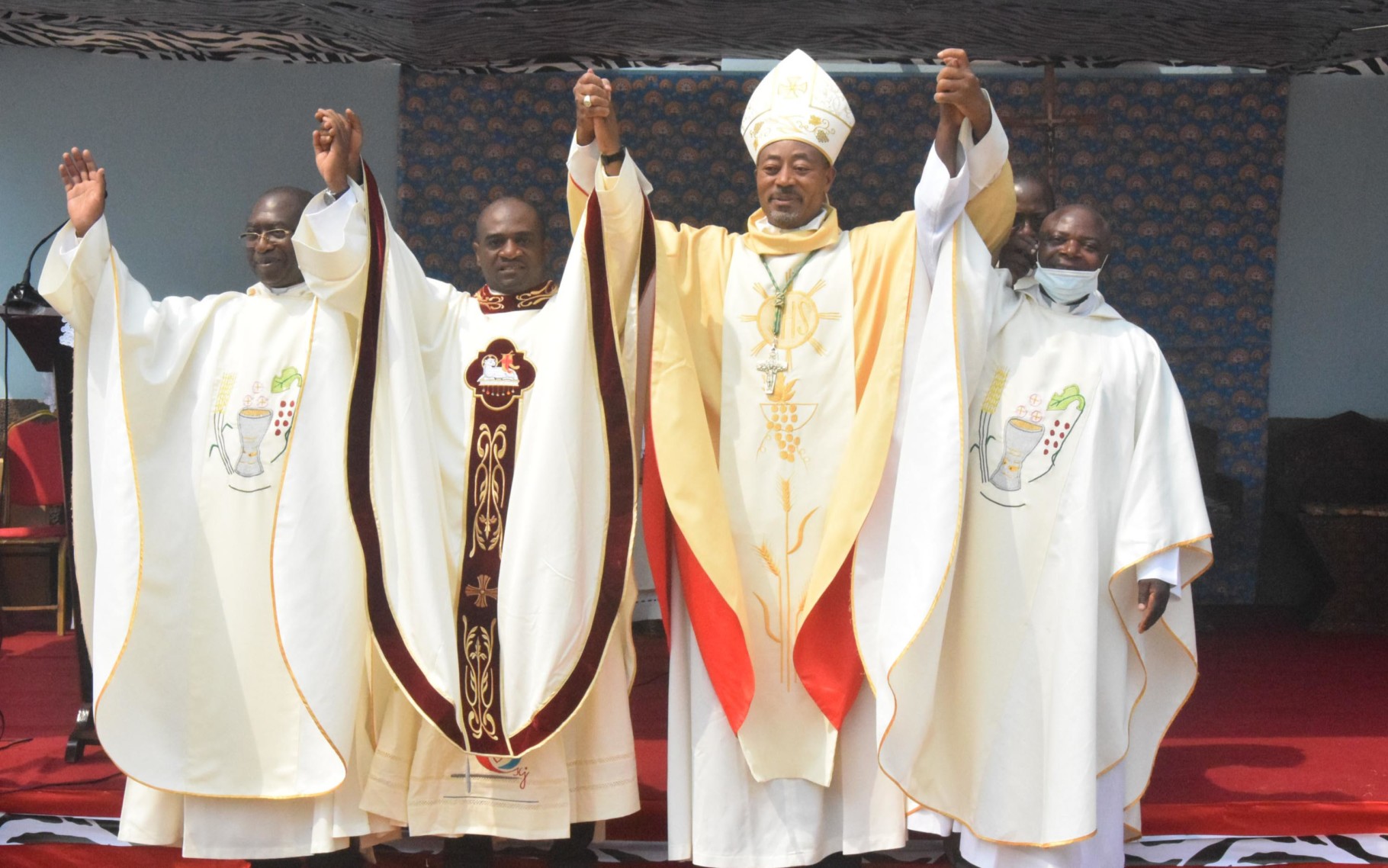 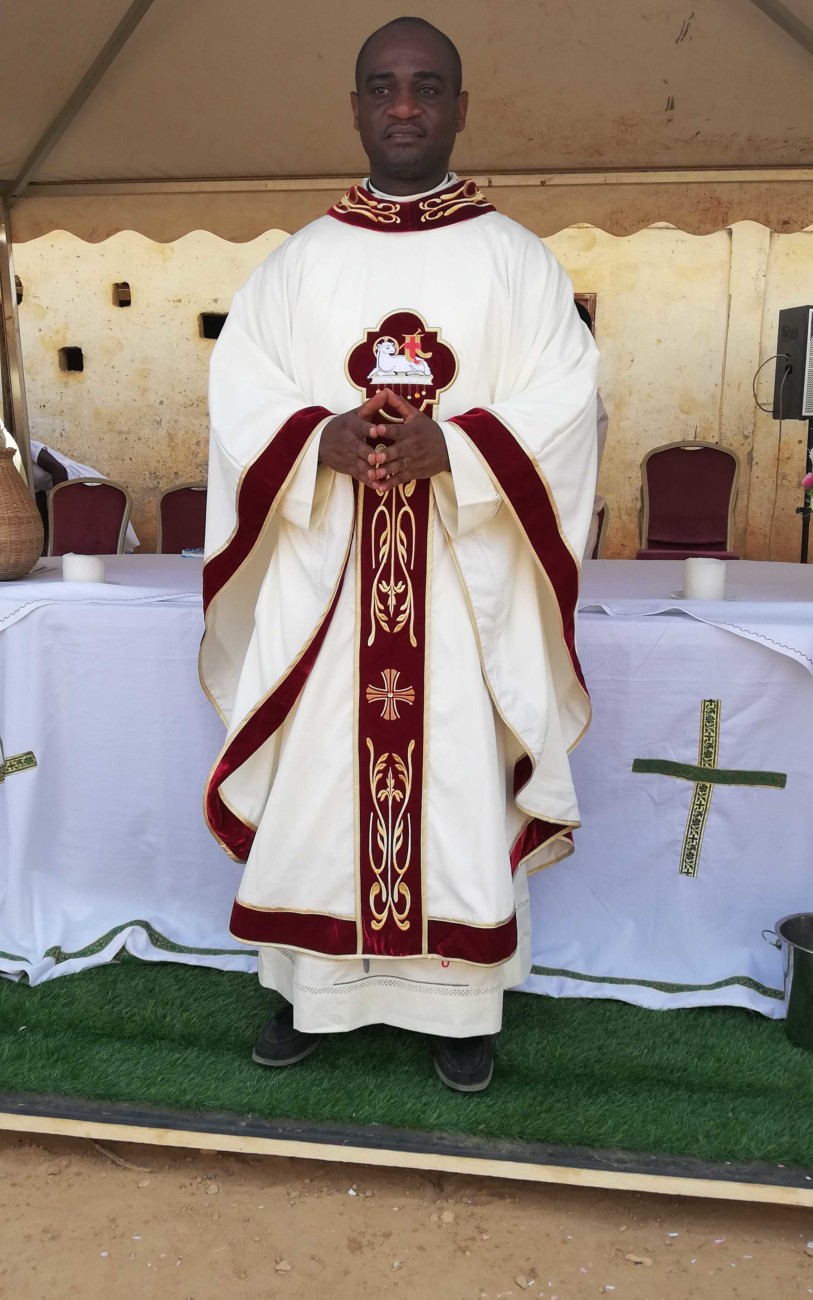