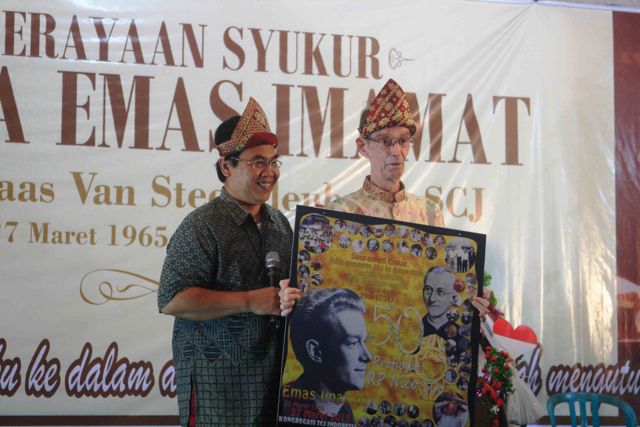 “I became a priest because of my mother’s prayer” that was Fr. Nico SCJ said in his homily in order ‘Thanksgiving Mass’ on 50 year of Priesthood. Father from Netherlands has a full name that is quite difficult to say by the Indonesian people, namely Nicolaas Arnold Carolus Van Steekelenburg, but people are quite familiar to call him “Pastor Nico”. With characteristics that are easily recognizable: slim, tall, Caucasian, agile, and if he walk that was very fast.

According to Father Nico, his vocation to become priest was not exception. But the fifth child of twelve siblings still feel there were a special. At night after he was ordained, At the time gathered in the middle of his family, his mother opened the secret that after giving birth to Fr. Nico, she prayed that this baby could be a Priest. This experience gives the impression of depth for Fr. Nico and he gives thanks for the prayers of his parents who constantly reinforce vocation.

Father who was born on November 3, 1937, know SCJ since he was a child. His family often visited by Fathers and Brothers SCJ and they always invite him to become a priest and became missionaries. Jadi ketika ia ditahbiskan, ia bertekad untuk mengabdikan dirinya sebagai seorang misionaris. 50 years as a priest is not a short time, but the Father who was born in the village of Holland Kwintsheul is felt that 50 years was a time full of joy and full of grace. He was grateful that he was called and chosen to be a SCJ priest and had the opportunity to serve as missionaries in Indonesia. He’s determined to serve until the end of his second homeland , Indonesia, and he did not want to go back to the Netherlands, thus submitted by him, using the Indonesian and Dutch language in front of the people and his families who support and love him. 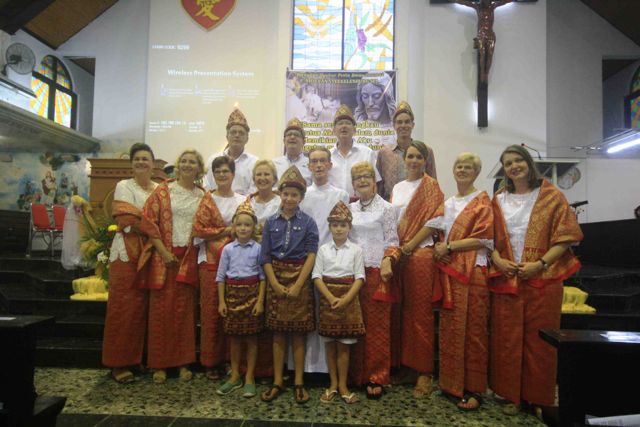 Father Nico is a good priest, a priest who dedicated his whole life to God, not just one or two hours but throughout his life as a priest. At the time of sleep, while walking, while preaching, when meeting with people, even when he was a traffic accident remains as a priest, said Msgr Sudarso while joking.

SCJ Congregation also feel this happiness for having Pastor Nico who has dedicated his whole life as a good SCJ, as expressed by Father Provincial SCJ, Fr. Andreas Madya Sriyanto SCJ. Train never stops at one station, but continues to run at the next station. As Pastor Nico, when he stepped in as missionary not just stop here, but continued by other young SCJ that will spread to bring the gospel of salvation, says Father provincial SCJ, which in the words of Father General SCJ.

Thanksgiving celebration was celebrated with very festive and enthusiasm of the people, attended by the priests, the religiouses, and of course the family of Pastor Nico who came from the Netherlands, Hong Kong, Singapore, and Jakarta. All present to give thanks and rejoice with Nico who celebrate the Gold Anniversary as Priest. Congratulation Fr. Nico SCJ! We wish you a healthy and full of passion to serve God and people. Hopefully we can imitate your loyalty as a priest, Dehonian who offered yourself forever to the Kingdom of the Sacred Heart of Jesus. 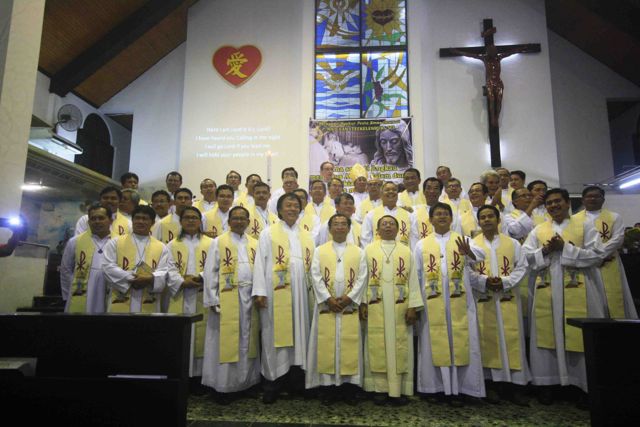