A Dehonian in Norway

Fr. Eduardo Nunes Pugliesi, SCJ, recounts his experience in the prelature of Trondheim, Norway, in the summer of 2021. The article appeared in "Il Nostro Frutto" magazine.

In the summer of 2021, I had a pastoral experience in Norway, from July 12 until August 20, with the purpose of being “a Dehonian presence on behalf of our community,” the request of the Superior General, Fr. Carlos Luis. The specific purpose of the visit was to learn about the social and ecclesial aspect of the Prelature of Trondheim (Praelatura Territorialis Trudensis).

The pandemic made the travel to Norway a real uncertainty. It was only a week before the scheduled date that I was able to receive confirmation that Norwegian laws were favorable for a trip from Italy. On July 12, I left Rome for Trondheim.

On arrival I was met by Bishop Erik Varden, the local bishop, who took me to the Cathedral, a place where I stayed during the five weeks. From July 12 to 18, I stayed mostly in Trondheim. I was able to get to know the city, Norway’s third largest by population (just over 200,000). It was founded in the year 997 and it’s mixed right in with the history of Christianity in Norway. It is regarded as a university town because of the approximately 30,000 young students who live there to attend the Norwegian University of Science and Technology.

In the center is Nidaros Cathedral, built on the burial site of St. Olav, King of Norway, who died in a battle at a place called Stiklestad, not far from Trondheim. This is a Gothic church, formerly Catholic and currently Lutheran.  I was given a tour by the Catholic pastor of Trondheim, Fr. Egil Mogstad, who was a Lutheran pastor and worked there. A very interesting point: he was received by the Lutheran people at that time with great courtesy.  They have a truly fraternal relationship.

Very early on Monday, July 19, I took the train to Oslo. I stayed in Oslo until July 21, Wednesday morning, then we began the pilgrimage to Trondheim.

We were two groups with 20 participants each. A Norwegian priest (from Oslo) as the leader of each group and me; two seminarians (from Oslo studying in Rome) in each group and all the others were young lay people. Most of them were from Oslo, but there were also young people from Trondheim and also from the northernmost Prelacy of Norway (Tromsø).

We walked more or less 130 km, divided into 7 days. The other group took a route through the mountains. We walked through the valley of Lake Mjøsa, the largest lake in Norway. One senses that although the Norwegian people are rich in financial resources, they have simple lives, with much connection to the beautiful nature of the country.

We arrived in Trondheim on July 27 (Tuesday). On day 28 (Wednesday), we took a bust trip to visit tStiklestad, the place of St. Olav’s death. The day of the Solemnity of St. Olav (29) was very beautiful. In procession all the Catholics came out of the Catholic Cathedral to the Nidaros Cathedral. At the door we were greeted by the Lutheran bishop and many Lutherans joined us. The beautiful Mass was celebrated by Bishop Erik and many people from the three particular churches in the country (Diocese of Oslo and the Prelatures of Trondheim and Tromsø). After Mass, we shared a nice lunch with all in the Catholic cathedral and in the evening there was an ecumenical celebration of Vespers in Nidaros.

After these commemorations I visited many other places in the country with the bishop. I was very impressed by the welcome given to Bishop Varden by the people of both the Catholic and Lutheran communities I visited. These are experiences to be recorded in the heart and shared in fraternity. 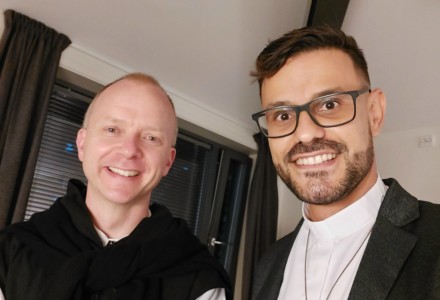 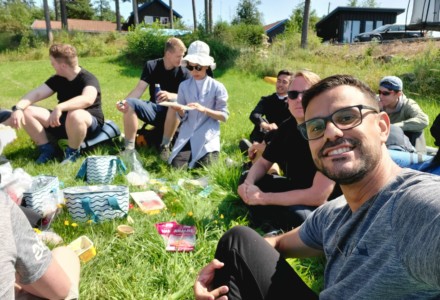 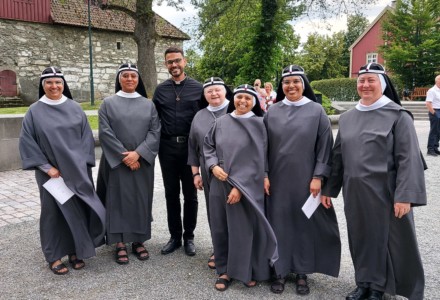 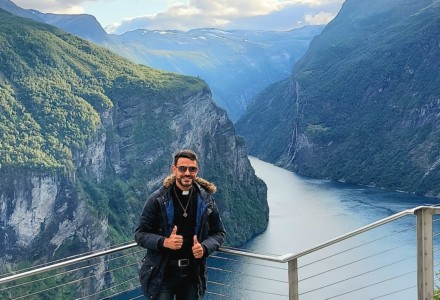 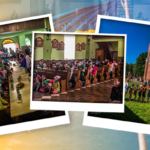 "Vacation from war". Summer camp for children during vacation in Irpin.

Promises of the Heart in a creative and dynamic way (I)

A new presence in Norway

Meeting between the General Government, the Bishop of Trondheim and the clergy of Trondheim.

We publish here the letter of invitation that the Bishop of Trondheim Msgr. Erik Varden wrote to the Dehonians. The letter is followed by a report of the bishop's visit to the Dehonians in the Generalate community

‘Il Nostro Frutto’ 2022: Listen to the Spirit of God, listening to each other!

The community of the Generalate shares some important moments of community and academic life 2021/2022.

The community of the Generalate in Rome publishes "Il Nostro Frutto," the magazine that reports on the 2020-2021 academic year, a year marked by the Covid-19 pandemic.

Young Bishop Erik Varden visits the Generalate to strengthen the bond with the Congregation.

Promises of the Heart in a creative and dynamic way (I)

"Vacation from war". Summer camp for children during vacation in Irpin.