“Solidarity Mission” for the victims of the Cyclone Ochki

On the peripheries » India

From February 1-5, seven members of the Indian District undertook a “Solidarity Mission” to the area most directly affected by Cyclone Ochki. The purpose of their mission was to be with the families still suffering from the devastating consequences of the storm and hear their stories.

Fr. Michael Augustine, SCJ, rector of the Dehonian scholasticate in Eluru, wrote about their experience. The following is taken from his report:

Yesterday (3 February), the whole day was dedicated to meeting the affected families and hearing their painful stories, and above all, to extend our humanitarian solidarity. Tears were flowing from their eyes as they began to share their grief and pain. All that we could do was to be with them, to listen to their tales of woe, and to extend our moral support. We were able to spend about 20-30 minutes with each of the families trying to give them as much time as they needed. 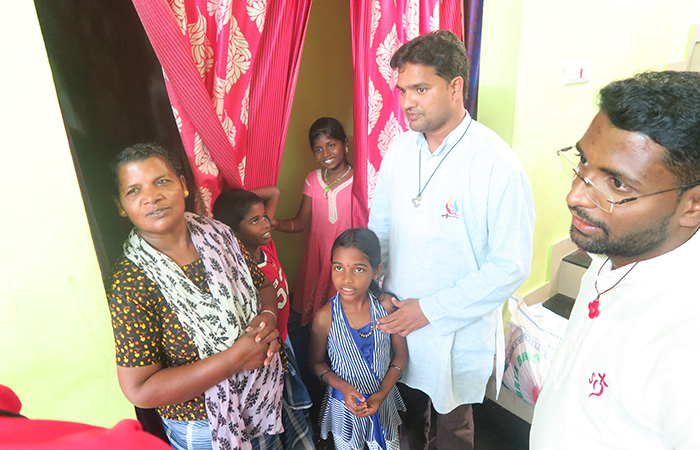 We visited 12 families in Adimalathura, the hometown of one of our students, Br. Thomas. His own brother, Shiluvaiyan, aged 25, was one of those rescued on the third day after the cyclone. For us it was emotionally draining to see the wives without husbands, children without fathers, loved ones without their sole breadwinners who were consumed by the fury of the storm and mighty waves on 29 November 2017.

The parish priest of Adimalathura, Rev. Fr. Jerald, told us that the central and state governments have done some things but not enough to alleviate the people’s excruciating pain and grief. On the part of the Catholic Church, the Archdiocese of Trivandrum has given some material aid to the affected. The Church has also made appeals to government officials to come to the aid of those in greatest need.

Almost a month after the storm, nine bodies were found, identified with the help of DNA tests, and given a Christian burial. The whereabouts of other is still unknown.

Twenty-nine fishermen were rescued and brought back home safely but they have yet to recover from the shock and trauma of their ordeal and are unable to get back to the sea to continue their sole means of livelihood. The local Church has organized counseling sessions and various spiritual aids to help with their rehabilitation. These men are unable and unwilling to say anything about what happened to them on that fateful day, or about their companions who were seen dying before their eyes in the middle of the sea. Those who survived are haunted by the helplessness they felt.

Our local Dehonian communities – as a group, and as individuals – have gathered money to assist the victims.

For us who have undertaken this Solidarity Mission with the support, encouragement, prayers and help of all the district’s confreres, it gave us the sense of what it means to be at the service of the afflicted and needy and to do what our founder, Fr. Leo John Dehon, wished us to do and to be.

With an Open Heart and Mind we are,