The Superior General’s Visit to the Southern Brazilian Province

Brief chronicle of the Superior General's visit to Brazil. A trip of almost two months.

The Superior General of the Congregation of the Priests of the Sacred Heart of Jesus, Father Carlos Luis Suárez Cordoniú, scj, was in Brazil visiting the Brazilian Southern Province (BRM). He was accompanied by the General Councilor, Fr. Levi dos Anjos Ferreira. The religious of the South Brazilian Province work in parishes, schools, universities, houses of formation and retreat houses.

Father Carlos Luis and Father Levi were welcomed at the Navegantes Airport, Santa Catarina, by Fathers: Sildo César da Costa, Provincial Superior, Diomar Romaniv, Provincial Counselor, Diego Martins, Provincial Treasurer and Paulo Vanderlei Riffel, Local Superior of the São Luís Gonzaga Community, Brusque (SC). The visits began on June 23rd. Levi began the canonical visitation by visiting the religious of the parish of St. Joseph in Corupá (SC) and then the religious of the parish of Our Lady of the Rosary in Nereu Ramos (SC).

On June 24, the Superior General presided over the celebration of the Solemnity of the Sacred Heart of Jesus in the seminary in Corupá (SC), at the seat of the BRM Province. Present were the priests, fraternity members, those in formation in the province, the Little Sisters of the Marian Fraternity and some lay Dehonians. Immediately after the Holy Mass, celebrated at 10:00 a.m., everyone went to the inauguration of the new installations of the Provincial Archives of Father Lux. At the end of the inauguration, a festive lunch took place. The afternoon was reserved for socializing and a soccer game. In the evening, a prayer vigil was held, culminating with an Adoration of Reparation, an act of reparation to the Heart of Jesus, and the blessing of the Blessed Sacrament.

On June 25, Fr. Carlos Luis and Fr. They reported on the reality of the Congregation and answered some questions from those in formation. Finally, they had Eucharistic Adoration. In the afternoon there was an animated gymkhana in the Corupá Seminary.

In the afternoon of June 26 and the morning of June 27 the canonical visitation continued in Jaraguá do Sul (SC) where they visited the confreres of the parishes of São Sebastião, Nossa Senhora das Graças and of the Novitiate Nossa Senhora de Fátima. On June 28, when we commemorated the 144th Anniversary of the Foundation of the Congregation of the Priests of the Sacred Heart of Jesus, the Superior General presided the Holy Mass in the Sacred Heart of Jesus Sanctuary in Joinville (SC). The following day, June 29, they went to Itajaí (SC), at the São Cristóvão Parish. On this same day, Fr. Carlos Luis accompanied the action of the Go to the People Project developed by the laity of the São Cristóvão Parish. The Project offers care and accompaniment to the street population of Itajaí.

The Superior General’s day continued in Brusque (SC), where he met with the communities of the Convent Sagrado Coração de Jesus, São Luiz College and Faculty. In the evening, they went to the Parish of Our Lady of Perpetual Help, Guabiruba (SC). Returning to Brusque the next day, they met with the Dehonian Family from Santa Catarina and Paraná at the Father Dehon Retreat House. After the meeting with the laity, our Superior General went to the Saint Paulina Sanctuary in Nova Trento (SC) and then visited the confreres of the Saint Joseph Parish, Botuverá (SC). Levi went to the locality of Vargem do Cedro. There, they visited the Cemetery and prayed at the tombs of Fathers Gabriel Lux and Germano Brand, the pioneers of the Congregation in Brazil.

The visit extended to Rio Grande do Sul. There, there were many manifestations of welcome to the visitors, from motorcades to presentations of gaucho culture. The territorial community of Rio Grande do Sul prepared a meeting with representatives of leaders and lay Dehonians from the four parishes where we work. Levi, went to Palmas and Mangueirinha, in the interior of Paraná. They got to know the confreres who work in this region, their achievements and the challenges they live in the dimension of evangelization. From Paraná, they returned to Santa Catarina and visited Rio Negrinho where we have the São José Seminary and the Santo Antônio Parish. After the fraternal meeting with the confreres who work in the Seminary and in the Parish, they went to São Bento do Sul (SC). In this municipality we work in the Puríssimo Coração de Maria Parish. After the visit to the confreres in São Bento do Sul, Fr. Carlos Luis and Fr. They had the opportunity to meet the confreres who work at St. Rita’s Shrine, St. Jude Thaddeus, Jesus Master Parish and ESIC. At ESIC, College and Faculty, Fr. Carlos Luis presided a Thanksgiving Mass for the 50 years of operation of this educational space. The building where ESIC is located has already served as a seminary of the Congregation and has formed many of our religious. After the visit to the religious who work in Curitiba (PR), the visitors went to Paraguay. There they met with the SCJs who work in that mission. The visit was marked by sharing and the presence of the Superior General helped to strengthen the Dehonian missionaries in the service of evangelization in Paraguayan lands.

Upon his return to Brazil, Fr. Carlos Luis directed the Dehonian retreat for the religious of the BRM Province. The retreat took place in the Sacred Heart House of Formation, in Jaragua do Sul (SC). About 50 religious took part in it. It was an opportune time for prayer, meeting with God and with the brothers. The Superior General dealt with themes from Sacred Scripture and our Rule of Life. The retreatants concluded the retreat renewed in faith and motivated for the mission. Levi met with the Provincial and his council and evaluated the visit. Finally, they traveled to Rondônia where they visited the Dehonians who work in the parishes: Nossa Senhora de Nazaré (Porto Velho) and Rainha dos Apóstolos (Ariquemes). Our Province was filled with joy, encouragement and enthusiasm in welcoming, listening and praying with our Superior General. We are grateful to God for the opportunity of the visit and for the valuable orientations to continue our mission in communion with the whole Congregation. 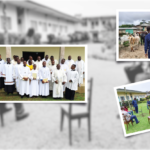 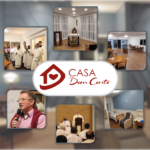 Superior General’s visit to Dehonians of RSA province, an occasion of unity and gratitude

From Oct. 30 to Nov. 15, the Superior General's visit to Dehonians in the Republic of South Africa took place.