How did the initiative for the process of the beatification of Father Martino Capelli come about?

Father Martino Capelli was killed by Nazi troops on October 1, 1944 in Pioppe di Salvaro (Bologna – Italy) in the Monte Sole massacre, together with Father Elia Comini, a Salesian and many other victims of the Nazis. This death hit the population hard, and although it was a painful event, it was never forgotten.

In 1984 (40 years after the death of the Servant of God), the provincial superior of the Dehonians of the Northern Italy Province, Fr. Tullio Benini invited those who had known him to gather news, documents and memories.

The process of Fr. Martino Capelli and Fr. Elia Comini began in Bologna. The Province of Northern Italy promoted the Cause of Beatification and Canonization from May 4, 1992 to February 10, 2001, the diocesan investigation was carried out in the city of Bologna.

We are grateful to this Province for having believed in the martyrdom of Fr. Martino Capelli and for having taken the decision to introduce the Cause. So many people have entrusted themselves to his protection and intercession.

What are the phases of the process of beatification of a martyr?

During the canonical process for all causes of beatification and canonization we encounter two phases: the first phase, the diocesan phase, which takes place in the diocese where the Servant of God died, and then the Roman phase, which continues in Rome in the Congregation for the Causes of Saints.

In the diocesan phase, documentary and testimonial evidence are gathered about the life and martyrdom of the Servant of God. Once this investigation is completed, all the documents are sent to Rome to continue the process of the Cause.

The Roman phase focuses on several stages: the preparation by the postulator of the Positio super Martyrio; its drafting and delivery to the Congregation of the Causes of the Saints; the study of the Positio in three congresses: by the historical consultants, then by the theological consultants, and then by the Cardinals and Bishops, who belong to the same Congregation.

When the vote of the three congresses is affirmative, the Supreme Pontiff promulgates the Decree of Martyrdom of the Servant of God and the preparations for the Beatification can begin.

It must be said that for a Servant of God to reach Beatification through martyrdom, no miracle is necessary. The sacrifice of life, without a doubt, is the conclusive sign of a faith overflowing with charity. In fact, it is a matter of sacrificing one’s life; that is, of renouncing what man considers most valuable, in order to affirm his faith, moved by love for God and sustained by his strength.

As religious, how can we participate in this process?

This process may appear to be a work between the Postulator General and the Congregation for the Causes of the Saints. However, it is not. We all participate in this Cause. I have always counted on lay people and religious who have helped me so that Fr. Martino Capelli’s process could go forward.

But I ask myself the following question: how can our Congregation be involved?

The first answer that comes to mind is prayer. All of us religious must pray to God, asking him that this cause will have a good outcome. In addition, we must implore the intercession of Fr. Martino Capelli. Prayer has a very powerful force.

In the same way, we can spread and make known the figure of the Servant of God, wherever we are. Knowing him and his story will help us understand what he can tell us in this concrete and present moment.

What impact does the life of Father Martino Capelli have on your time?

Father Martino Capelli’s life may seem, at first glance, to have passed in a discreet, rapid, and brief way in the Church and society of his time, but in his short life, he gave a clear and evident witness of faith, even to the shedding of his blood.

An important and very relevant aspect was his way of situating himself in life: transmitting to others the depth of events, always being “with his feet on the ground”, and living life with depth and meaning, beyond appearances, benefits, the comfort of the moment and the dynamics that lead to an easy acceptance of existence.

Especially, we can say that during the summer of 1944, he committed himself to personally care for God’s suffering people. And he did so with ardent charity, living hope, and a firm understanding of the priestly ministry and its demands.

On his path to martyrdom, which ended on October 1, 1944, he also demonstrated his ability to do good, risking his life. When he was captured, humiliated, imprisoned and finally killed, Father Martino Capelli maintained an attitude of meekness and above all, a deep and confident prayer. He always maintained a lucid hope in Heaven: it was he who blessed, in a last gesture – already dying – those who with him had been wounded and killed by the Nazi troops (the SS). It was the final act of a life entirely dedicated first to formation for the priesthood and then to pastoral ministry. 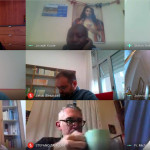 The 77th Anniversary of the Death of Fr. Martino Capelli, scj