The most affected country in Africa since the start of the Covid-19 pandemic is South Africa, with the official record of having 693,359 cases of infection and more than 18,000 deaths, according to some sources. In such a context, the various actions adopted against the spread of the virtus have nevertheless enabled the Dehonians of the Dehon International formation house to strengthen their fraternity with one another.

The Coronavirus pandemic (Covid-19) which was first reported in Wuhan, China spread to South Africa on March 5, 2020. In order to contain the spread of the virus, on March 15, the country’s President, Cyril Ramaphosa declared the national state of disaster entailing the announcement of a number of measures such as a lockdown which will soon have a great impact over the social fabric on various spheres, this include among others: the social, economical, and religious dimensions. Despite having numerous measures taken in the fight against this unseen common enemy, South Africa had registered several consequences across its territory. For instance, the country has recorded the highest number of confirmed cases and deaths which made it the most affected country on the continent. It is then at the center of this situation that the Dehon’s International Formation House has been living the spirituality and charism of the Congregation since the outbreak of the pandemic.

It would be crucial to highlight that faced with this unprecedented situation, the community that consists of 33 religious (29 students and 4 priests) was at first invaded by a feeling of fear, the fear of the unknown and of the future. Then, we realized how important it was for us to be bearers of hope in a society devoured by fear, to humble ourselves before God’s magnificence, the unique principle of the world and to cope with this situation in faith. Thus, it is in this mind that on the spiritual level, we have continued to celebrate the Eucharist every single day in communion with our brothers and sisters who could not attend in the parishes. We have equally been faithful in having our daily sessions of adoration and saying a special prayer to Mary during this time of the Coronavirus. Concerning the social sphere, the community manifested Christ’s love for the poor by sharing with them the fruit of our Lenten efforts. With regards to the academic field, we have been following online learning and teaching thus making good use of social media. In the same vein, although on the pastoral dimension, we made the decision to stop any physical pastoral activity, we could assist a couple of people in need by means of social media.

On the community level, we have been holding our different activities together as per usual yet in the strictest respect of the regulations of restriction given by the government. Additionally, this has been an opport to strengthen our fraternity and mutually help each other to face this situation with courage, hope, and faith. This sense of fraternity was made more visible, for instance, when three members of the community lost their biological fathers. These bereaved members were assisted and comforted by the rest of the community thus mirrioring the richness of the community life and of being Dehonians.

In a nutshell, all community endeavours during this time of trial have been carried out in the spirit of Sint Unum through daily support and encouragement to one another in a cheerful mood. 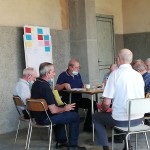