The month of August of 2017 has been filled with blessings in the District of Vietnam. Until now, all vow celebrations and ordinations were done outside of the country. However, this year we had two historic events for our district back to back.

First, we celebrated the final profession of Br. Vincent Bat Nguyen. It was a very special event for both the district and his family. The celebration was done at Br. Vincent’s home parish where more than 500 of his family members, friends, and neighbors attended the ceremony. On Sunday, August 6, the celebration began with the grand procession with Br. Vincent Bat’s family, SCJs, priests and then Br. Vincent and the main celebrant, Fr. Francis Vu Tran.

After the homily, Br. Vincent was invited to step forward and profess his final vows with the Congregation of the Sacred Heart of Jesus, Vietnam District. The celebration ended with a reception that included much fellowship and a lot of food. More than 50 tables were filled with people laughing and enjoying their meal. For the district, it was an unforgettable moment because after many years most of our vow celebrations and ordinations were done outside of our motherland; Br. Vincent Bat’s event marked a new beginning for the district.  The celebration was very prayerful and yet a joyful occasion for the family as well. His parents and family were grateful because the ceremony was done at their home parish. “It was a great testament for those who have prayed for his vocation” said his mother. With happy tears in his eyes, Br. Vincent Bat’s father remarked, “it was an honor and blessing for our family to witness such a beautiful event.”

Following the final vows celebration was the district’s annual assembly. This year the district moved the assembly to August from the usual January. The move was proposed by various members of the district due to the close proximity of the Lunar New Year which often happens in the month of January.

The assembly began with the acceptance of Br. Vincent Bat’s perpetual profession on Sunday. After the celebration, the assembly continued with the report of various committees regarding the growth of the district. After the reports of each of the committees, all members were invited to focus on the growth of the district. During the discussion, we tried to orientate all members to refocus their energy and learn to distinguish the uniqueness of local communities within the life of the district. At the same time, each was challenged to see the differences between local community versus the district. After having had great discussions for three days, we closed with the Eucharist celebration.

After the assembly, we moved to Bung Parish to celebrate Br. Vincent Bat’s diaconate ordination, the first to take place in the District of Vietnam. Since the creation of the third community, Dehon House III, we were blessed with the acceptance of Msgr. Joseph Tuoc, who has welcomed and accepted us to be part of the diocese. His acceptance made it possible for us to help at Bung Parish, which became the place of the diaconate ordination. It was a blessing from the start. Our Congregation’s name is Priests of the Sacred Heart and both the diocese and the parish are dedicated to the Sacred Heart of Jesus. During the ordination, Msgr. Joseph Tuoc invited Br. Vincent Bat and our community to contemplate the pierced side of Jesus where blood and water came out as a font of salvation for all people. He continued, “for those who take on the name of Sacred Heart, we are charged with responsibilities to make the Heart of Christ known to every man and woman.” He told us that “Men of the Sacred Heart, it is your duty and your vocation to bring the heart of Christ to those who are despised by society, those who are treated as outcasts of the Church, and those who are hurt. Let them know that the Heart of Christ is there for them through you, through your religious commitment.” After the homily, the rite of ordination continued with Br. Vincent Bat’s promise to be obedient to the bishop and the legitimate superior, followed by the Litany of Saints and the laying of hands. It was significant that during the vesting his father brought the dalmatic and his mother helped him to vest. After the Eucharist, the celebration continued with a big dinner. During the feast we noticed the local government was also present. They came to congratulate Br. Vincent Bat and the community. It was a blessing all around! 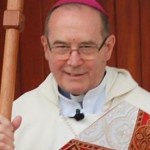 The Dehonians in Vietnam are engaged in various ecclesial ministries and services to society.