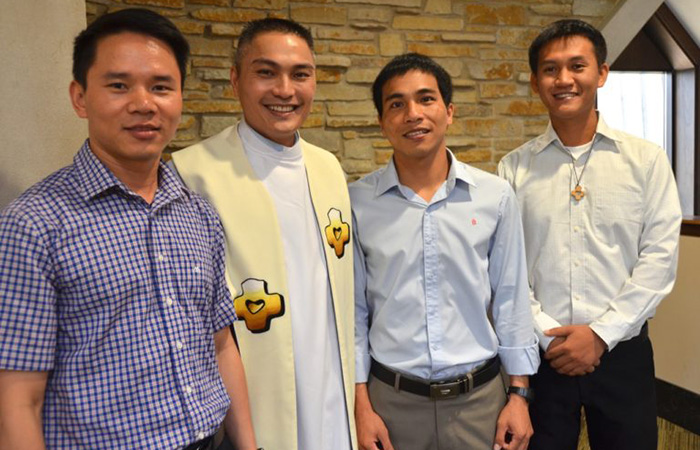 On August 12th the District of Vietnam will celebrate the first ordination of an SCJ within the district itself. Until now, all ordinations were done outside of the country, often in the Philippines, where many Vietnamese Dehonians have done their formation and academic training.

“We are growing as a district, and part of that growth means being more fully accepted by the government and the Church in Vietnam,” said Fr. Francis Vu Tran, SCJ, district superior. He added that such acceptance is what now allows the diaconate ordination to take place in the country.

August 12th will also be a significant day for Fr. Francis; it will be the one-year anniversary of his installation as superior. A US citizen originally from Vietnam, Fr. Francis was asked by Fr. Heiner Wilmer, SCJ, superior general, to return to the country of his birth to lend support to the young district. Soon after, he was elected as its second superior, succeeding Fr. Rino Venturin, SCJ, who led the district since its establishment in 2013.

In a year’s time much has changed in the district. A philosophy program was initiated in Vietnam which now allows SCJ candidates to do their studies in the district instead of going to the Philippines. This is no easy task in a country where pre-theology philosophy programs are at capacity. District students are split between four schools because there is not space for all to go to one program. It is a challenge, but Fr. Francis said that the benefit is that “it is a way for us to make the congregation better known to the ecclesiastical community in Vietnam.”

With the help of the U.S. Province, in particular, with a gift from the patrimony of Fr. Michael Burke, SCJ, the district’s first community house is being expanded to create a chapel and more living space for the philosophy students.

The district opened its third community this year, Dehon House III. It is located in the diocese of Phu Cuong. This is a house for young men in college discerning a vocation with the congregation. They live in community while preparing for entrance exams for Philosophy. In general, students are not accepted into formation until after they have earned an undergraduate degree. 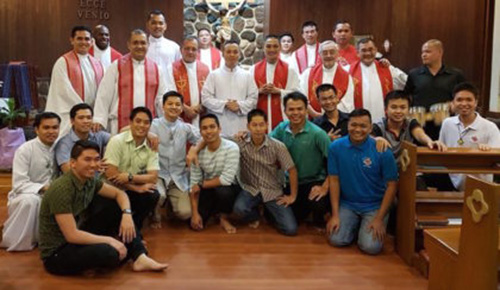 Dehon House III is also the base for a new ministry in the district: pastoral work at Bung’s parish, one of the largest parishes in the diocese.

In many ways, the focus of the past year has been on taking the district to its next level, helping it to mature beyond its first years as a small, missionary effort. With three communities, there are now three local leadership teams, three local superiors. No longer is all the authority in the district superior.

In the future, Fr. Francis sees the congregation taking on missionary assignments within the country, going to areas of Vietnam where the presence of the Church is most needed. Already the bishop of Phu Cuong has asked the SCJs to consider staffing two parishes near the Cambodian border.

“It would be good for us to be there, it is difficult to find priests to minister at the parishes,” said Fr. Francis. “But we need to wait until we have a few more SCJs ready with the experience they need.”

But as the district matures, so does its formation program. Next year first professions will be done in Vietnam instead of the Philippines; those making final vows will do so in Vietnam as well.

Fr. Loc, a member of the Vietnamese District doing graduate studies in Rome, introduces himself at the start of the summer ESL session.

Fr. Francis stresses that the move to bring formation back to Vietnam isn’t out of a desire to become insular. Paired with expanded formative training within the district is Fr. Francis’ desire for Vietnamese religious to experience the congregation beyond Vietnam, beyond Asia. “I want us in the district to really live ‘We the Congregation,'” he said. “We are Dehonians, members of an international religious congregation; we are not just the Priests of the Sacred Heart in Vietnam.”

The Vietnamese District is developing relationships with other entities so that its students and young religious can minister and study throughout the world. This summer six students from the district are in the ESL program at Sacred Heart Seminary and School of Theology. Fr. Francis spent much of June and July in Hales Corners as a support to the students.

The district is also developing relationships with benefactors as it works toward financial autonomy. The district’s first fundraising director has been named; he will begin to establish a development office during the next year. Fundraising in Vietnam finds success in one-on-one relationships. Benefactors have already come forward to help feed the students through donations of fish, vegetables and rice. Even soap for the communities is provided by benefactors. 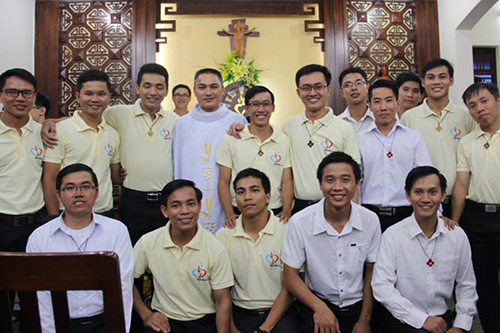 A change in direction

“Ecce venio” [I come to do your will] is what Fr. Francis often says when asked about being in Vietnam. “It came as a surprise when Fr. General asked me to consider it,” he said about his return to Vietnam last year. “I was preparing to complete my doctoral thesis, I expected to serve at a seminary, most likely Sacred Heart. It turned my life upside down.”

But during the past year he has found that an unintended change in direction can be a good thing. He admits that going to Vietnam took him out of his “comfort zone,” literally and figuratively. However, it has also opened many opportunities for him. Starting next year he will teach courses in Scripture at both the Catholic University of Saigon and at the Major Seminary of Saigon (Ho Chi Minh City). Much of his time this summer has been in preparation for those courses.

“There are very few theological materials in Vietnam,” he said. “I am assembling the resources for my classes while I am here.” It is more difficult to prepare for his first teaching assignments in Vietnam than it would have been in the US Province. “But it is forcing me to be creative.” And that he sees as an opportunity. “The challenge is good for me academically.”

While in the States this summer Fr. Francis has also been working to complete his own studies, which include his doctoral thesis. He is a doctoral candidate in scripture at the Gregorian Pontifical University in Rome. Fr. Francis plans to complete his thesis in 2018 and defend it in 2019.

When asked for closing comments about Vietnam, and his first year as superior of the district, Fr. Francis’ words were simple:

“Pray for us. Pray that we – as a congregation – can follow the mission that the Spirit has invited us to fulfill through the charism of our founder, Fr. Leo John Dehon.”